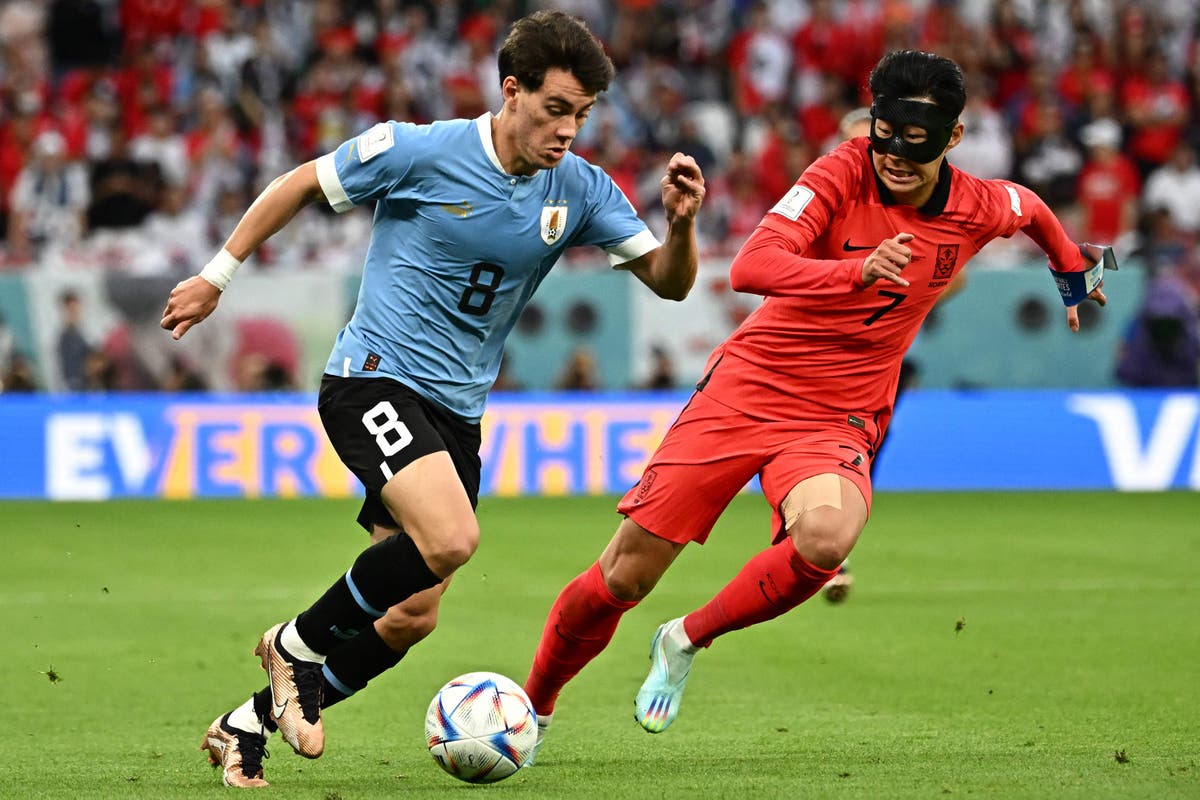 Uruguay play South Korea in Group H of the World Cup in Qatar.

Two-time winners of the tournament, La Celeste are seen as dark horses this year, with Liverpool’s Darwin Nunez in fine form, while veteran forwards Luis Suarez and Edinson Cavani will look for one last hurrah.

Federico Valverde might be more important than anybody, and the Real Madrid midfielder will be key to dictating the tempo against South Korea. Son Heung-min is hoping to play despite suffering a face fracture in the build-up for the tournament while playing for Tottenham in the Champions League, meaning he will wear a face mask – at least during the group stage.

Both sides will be confident they can not only qualify but finish top of a wide-open group that also includes Ghana and Portugal.

Follow all the action with our live blog below

90+1 mins: we’re into seven minutes of added time, and suddenly both teams have found some energy.

What is the Uruguay goalkeeper doing?! He plays it straight to Son on the edge of the box, with the foward taking a touch as defenders closed in. His takes aim with his left foot and is not far away, with Rochet diving to his left. Almost.

WOW – what an effort from Valverde! From 25 yards out, the Real Madrid midfielder lets fly with a stunning effort that rattles the cross bar, almost finding the top corner. So, so unlucky.

87 mins: Time is running out for Uruguay – although they are now they only team who are pressing for a breakthrough goal. Bentancur swings a cross into Cavini. He has to stretch to reach it, but can’t direct it on target.

84 mins: One of those days? Nunez now pops up on the right and cuts inside. He tries to find Bentancur with a reverse pass but overhits it, and it trickles out of play.

81 mins: CLOSE! Almost a moment of magic from Nunez. He knew what he wanted to do after receiving the ball from Cavani in the left channel. Despite having an option outside of him, Nunez cut in and went for the far post. It shot past, with Cavini almost getting his head on it after continuing his run into the box.

80 mins: The Independent’s sports editor Ben Burrows has been at two of the three goalless draws at the World Cup so far. His match today was Uruguay vs South Korea, and we are now heading for a third…

77 mins: Almost an instant impact from Cho Gue-sung! He brings down a pass and then flashes a half-volley wide from 30 yards.

Now a double change for Uruguay. Vina and De La Cruz come on.

76 mins: Smart defending from Bentancur to read Son’s cross and cut it out at the front post. Then, Nunez is unable to control a long pass forward.

74 mins: A triple change for South Korea. Among that, Kim Seung-gyu is off and will be left with the memory of his first-half miss. Cho Gue-sung will now lead the line.