A bumbling crook tripped and fell as he tried to subdue a 39-year-old man in a caught-on-camera Queens robbery, police said Saturday.

The victim was entering his home near Beach 64th St. and Almeda Ave. in Far Rockaway about 1:20 a.m. Friday when the crouched-over thief, sporting a grey hooded sweatshirt and black surgical mask appears from the side of the house and creeps up behind him. 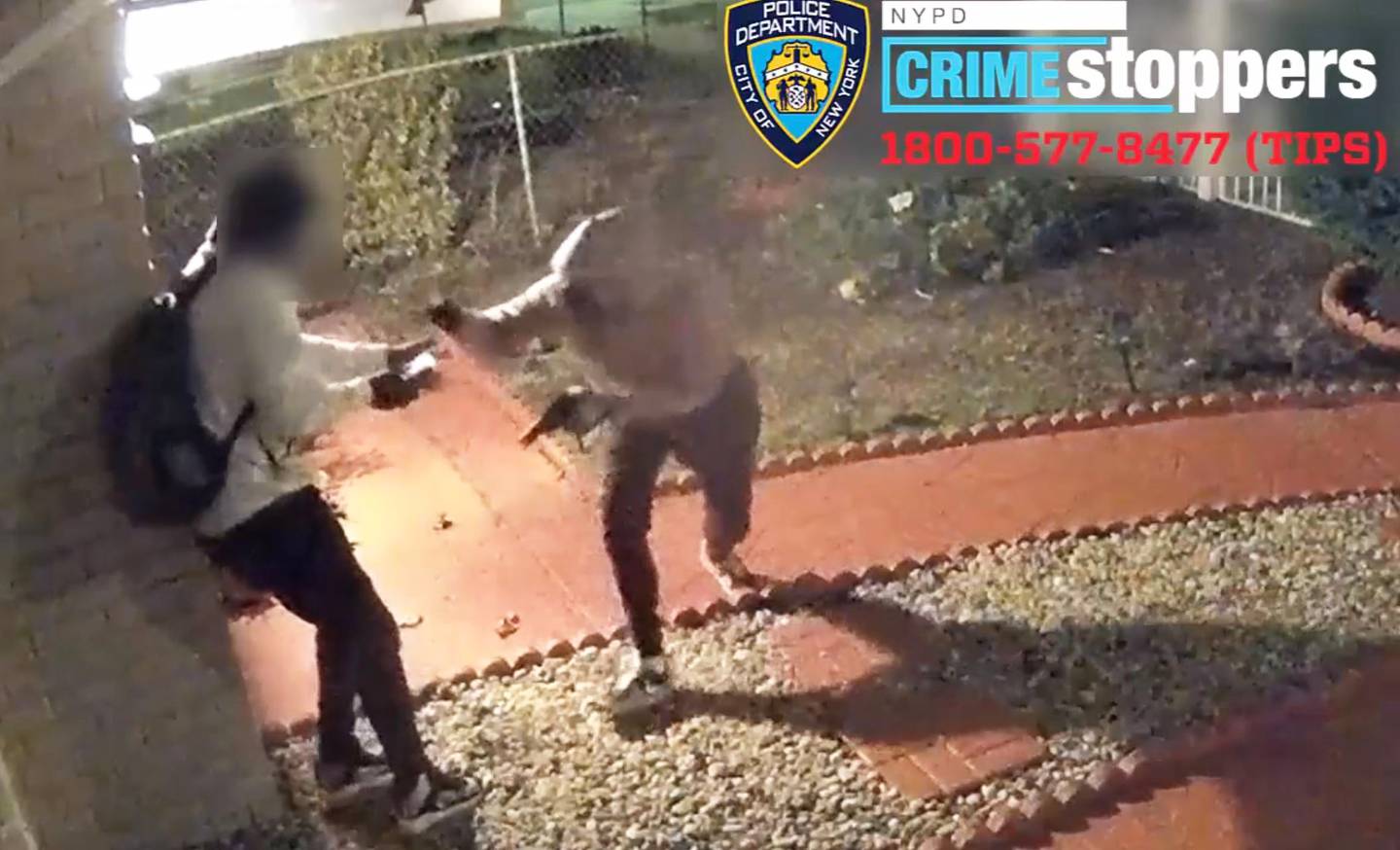 A Queens robbery was caught on camera when the crook tripped and fell as he tried to subdue a 39-year-old victim was entering his home near Beach 64th St. and Almeda Ave. in Far Rockaway on Friday, Sept. 23, 2022. (DCPI)

“Get inside!” the thief screamed repeatedly, pistol in hand as he tried to get the victim to comply.

But the victim refused to hand over his belongings, sparking a struggle. The gunman tried to sweep his victim’s legs out from under him, but missed and ended up falling onto the ground, the video shows.

The crook manages to get back up and continue the fight just as his accomplice shows up.

Together, the two swiped the victim’s Rolex watch, a wallet containing $1,700, two iPhones and a backpack containing an Apple laptop computer before running off. 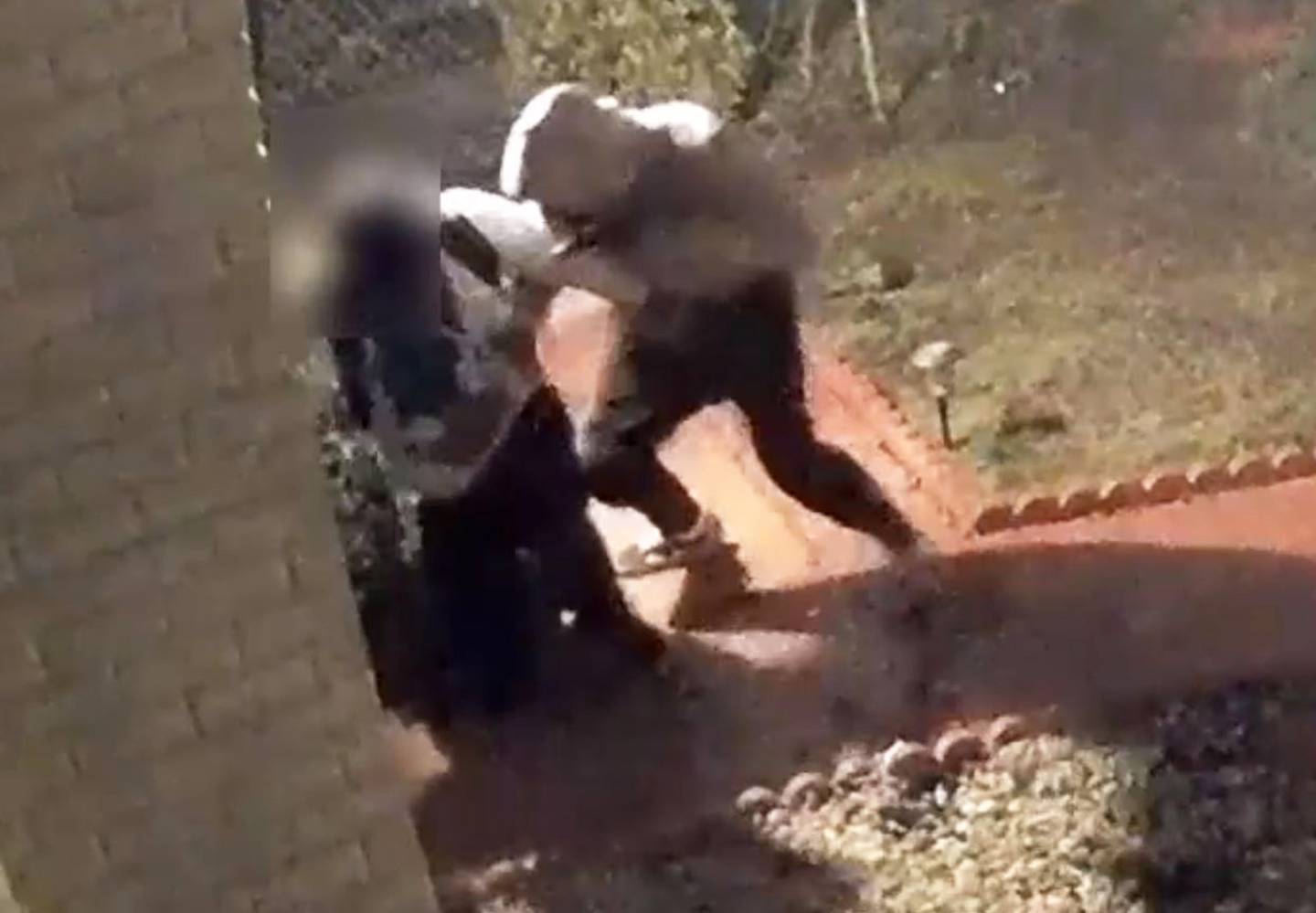 The thieves escaped in a white Honda Accord with tinted windows and South Carolina license plates parked by the corner, cops said.

Cops on Saturday released the surveillance video in the hopes someone recognizes the two muggers.

Anyone with information regarding their whereabouts is urged to call NYPD Crime Stoppers at (800) 577-TIPS.

The political and spiritual symbolism of Mauna Loa’s historic eruption

Happy Valley: when will BBC show return for season 3, and who will be in the cast

The most beautiful hotels in the world

Jail for trio linked to ruses to get Covid-19 grants

USPS at highest processing capability ever this holiday season

A Conservative MP has been reported to the police over “allegations of serious sexual assault”, multiple reports state. However the backbencher has not had the Tory party whip suspended, the Sun states, despite an investigation apparently being conducted by independent law firm. Several reports have surfaced overnight claiming a group ...

Elon Musk brain chip: what is Neuralink owned by Twitter CEO, chip explained - what he said about human trials

Elon Musk has had a very busy year, what with his , Tesla and the non-stop revelations about his private life. The has come in for much criticism since taking over Twitter – a move that has led to controversies, like the ditching of the social media platform’s and a ...

Boy, 4, is fourth child to die from Strep A as parents ‘broken’ by death of girl, 7, in bacterial infection spread

A FOURTH child has died from Strep A with one set of parents said to be “broken” from the death of their daughter, 7, in Wales. Muhammad Ibrahim Ali, aged four, died at his home according to his heartbroken family, after three other primary school pupils were killed by ...


View more: Boy, 4, is fourth child to die from Strep A as parents ‘broken’ by death of girl, 7, in bacterial infection spread

Give budding podcasters the perfect gift with Vocaster

20% off the Vocaster range this holiday season


View more: Give budding podcasters the perfect gift with Vocaster

Injuries are inevitable in the NFL, but the two Los Angeles teams sure seem to have more problems than most. The Rams will go into their Week 13 game with either John Wolford or Bryce Perkins as the starter as they hope to hang on and pull off a ...

The B-21 Raider is the first new American bomber aircraft in more than 30 years. Almost every aspect of the program is classified.


View more: US Air Force Set to Unveil the ‘Most Advanced Stealth Bomber' Ever Built: The B-21 Raider

The Shanghai International Circuit (Getty Images) The Chinese Grand Prix has officially been axed from next season’s Formula 1 calendar. Formula 1 bosses had hoped it could find a resolution to China’s Covid policies for the race but has now given up in that quest. The Chinese GP was ...

How the Yankees’ worst contracts are weighing on their offseason

Why Paris is still the ultimate festive escape

Biden seeks to reshuffle primaries as 2024 takes shape: The Note

Sajid Javid resigns: former health secretary to stand down as MP at next general election

Inflation driven by profits in few sectors, including oil and gas: report

Why flight times are longer than they were 25 years ago

This is how much the BMW XM and M2 models cost in SA.

The Cure tour 2022: setlist, where to get Belfast tickets - plus Leeds, Glasgow and Cardiff dates and venues

Pentagon debuts its new stealth bomber, the B-21 Raider

Millennials can save Medicare

Netflix Troll: what is 2022 film about, trailer, cast - is it a sequel to Troll Hunter?

Review: 'Women Talking' opens you up to a unique and unforgettable film experience

A little perspective on housing for Mayor Adams

In New York, some lives are cheap

Stop calling them conservatives: Broad support for the Big Lie is only one piece of proof most Republican elected officials are radicals

Job market shows signs of slowing before Friday's employment report, but not by much

Some clothing choices have caused a stir at the World Cup

Perodua has sold 250,795 cars so far this year, the most in its history