A statement said there would be no entry to any new arrivals on Wednesday. 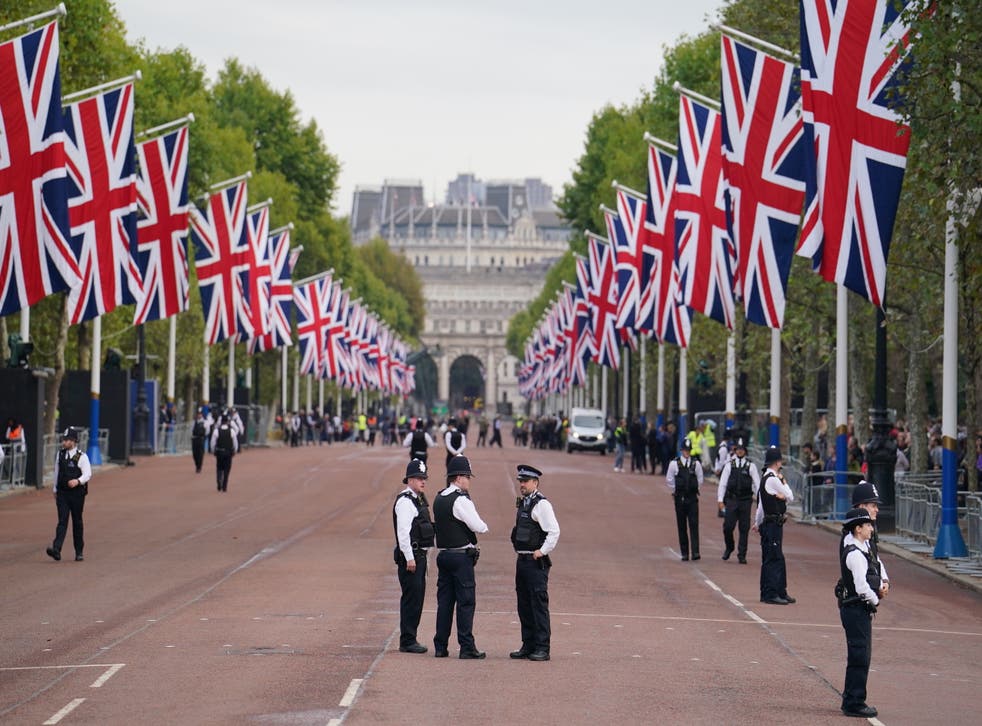 Police on The Mall ahead of the ceremonial procession of the coffin of Queen Elizabeth II, from Buckingham Palace to Westminster Hall, London, where it will lie in state ahead of her funeral on Monday. Picture date: Wednesday September 14, 2022. (PA Wire)

London’s City Hall has said all viewing areas for the procession of the Queen’s coffin from Buckingham Palace to Westminster Hall are full.

A short statement said there is “no entry to any new arrivals”, adding that people should instead head to Hyde Park to watch proceedings on large screens.

The royal family will accompany their matriarch on foot on the journey to Westminster Hall where hundreds of thousands of people are expected to pay their respects after queueing for hours. 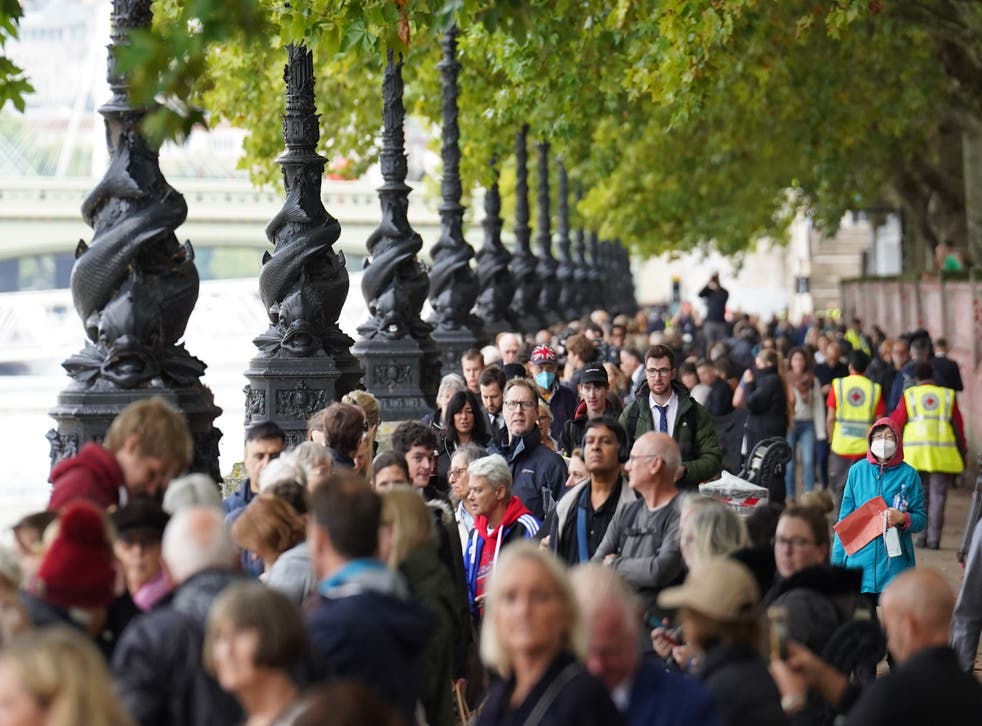 Members of the public join the queue on the South Bank, as they wait to view the Queen lying in state ahead of her funeral on Monday (Stefan Rousseau/PA) (PA Wire)

Tens of thousands of people lined the streets waiting for the Queen to leave Buckingham Palace for the final time.

Charles, the Prince of Wales and Duke of Sussex, along with the Duke of York, the Princess Royal and the Earl of Wessex, will form part of the procession on Wednesday afternoon.

Anne’s son Peter Phillips and her husband Vice Admiral Sir Tim Laurence will also walk behind the procession, as well as the Duke of Gloucester and the Earl of Snowdon.

The Queen Consort, the Princess of Wales, the Countess of Wessex and the Duchess of Sussex will travel by car. 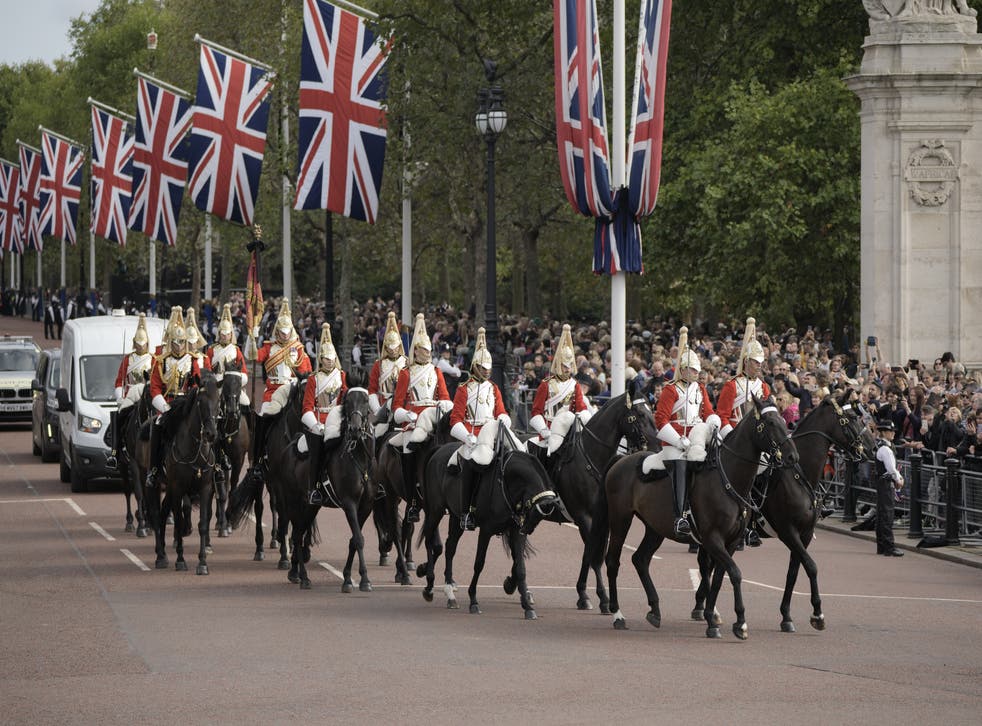 The procession will leave the palace at 2.22pm and is expected to arrive at Westminster Hall at 3pm.

Large Union flags were positioned above the crowds, who were packed in behind temporary barriers.

Uniformed police officers stood in front of those who had lined up to catch a glimpse of the procession from the palace down The Mall to Westminster Hall.

Mourners have already joined the queue to attend the Queen’s lying in state which begins at 5pm, continuing until 6.30am on Monday September 19, the day of the Queen’s funeral. 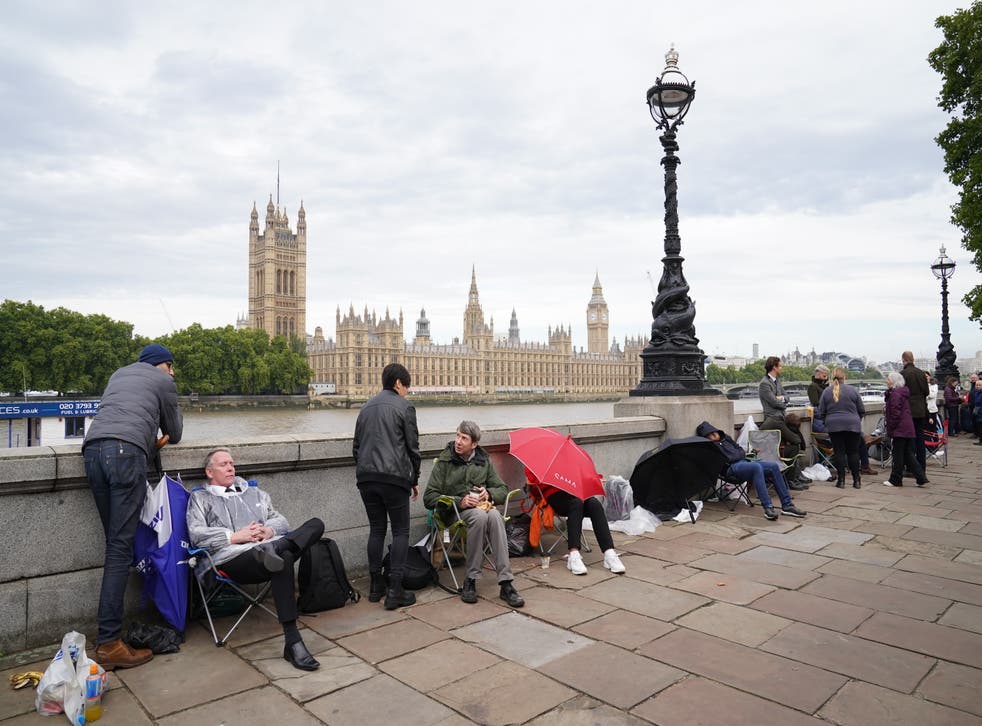 “There is no entry to any new arrivals.

“If you are in the area or about to arrive, please head to the screening site in Hyde Park for the lying in state on large screens.”

Government guidance says the queue is expected to be very long, with people standing for “many hours, possibly overnight” and with very little opportunity to sit down.

The presence of Charles, William and Harry in the procession will see the father and sons united in their grief for a mother and grandmother.

William and Harry put on a united front with their wives during a mammoth walkabout on Saturday.

The brothers have a well-documented troubled relationship but the death of their grandmother saw them unexpectedly come together when they viewed floral tributes left to the late Queen at Windsor Castle.

William, Kate, Harry and Meghan arrived in the same vehicle and greeted well-wishers for around 40 minutes before William hopped into the driver’s seat of the Audi with his wife in the passenger seat, and his brother and sister-in-law in the back.

Then in Harry’s tribute to his grandmother he said he wanted to honour his father at the start of his reign as King.

The last time Charles and his two sons were all seen together in public was at the service of thanksgiving for the Queen in St Paul’s Cathedral during the Platinum Jubilee celebrations in June.

But on that occasion, Harry and Meghan were seated some distance from Charles and William on the other side of the aisle in the second row, behind the Wessex family and the Duke and Duchess of Gloucester.

The Jubilee service at St Paul’s was Harry and Meghan’s first public appearance alongside the Windsors since they stepped down as senior royals in 2020 amid the Megxit storm.

In April 2021, Harry and William joined their father when they walked behind the Duke of Edinburgh’s coffin at his funeral.

The brothers were separated by their cousin Peter Phillips but he dropped back half a pace at one point so the siblings appeared closer together.

After the funeral service, William and Harry could be seen chatting as they walked back up the hill from the chapel to the castle.