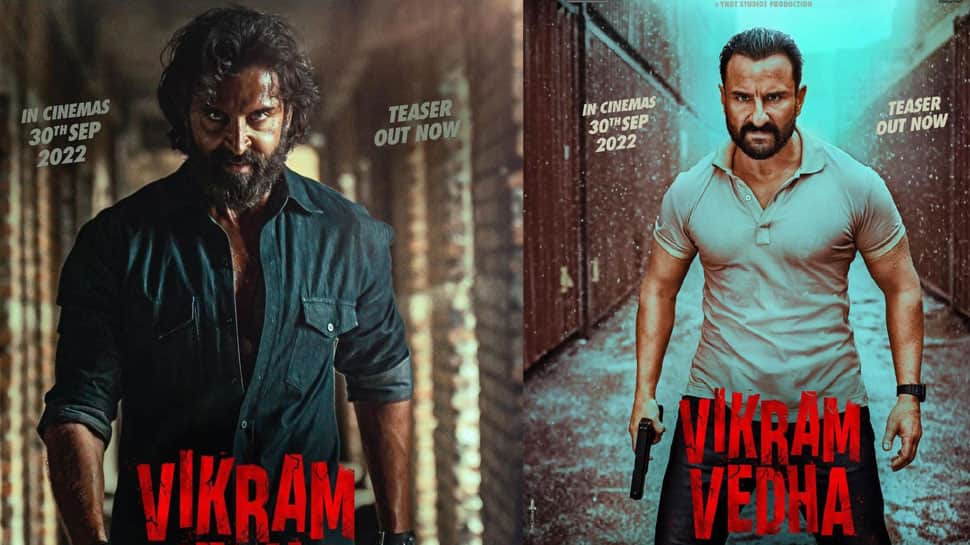 New Delhi: Talented filmmaker jodi of Pushkar-Gayatri’s much-awaited Vikram Vedha has been seen by a section of media and fans too prior to its worldwide release on September 30, 2022. And the verdict on social media is OUT. The film stars Hrithik Roshan and Saif Ali Khan in the titular roles of Vikram and Vedha. The audience is bowled over by the superlative performances of the stars and has flooded social media with their reviews.

#HrithikRoshan and #SaifAliKhan power #VikramVedha with supreme performances… #Hrithik is fantabulous, breathes fire and venom, is sheer magic on screen… #Saif is superb, matches #Hrithik at every step, an actor who never ever disappoints. #VikramVedhaReview

Yes, Vijay Sethupathi will always remain the best as Vedha but #HrithikRoshan gives another dimension to the character

Some scenes are feast

His performance & the character writing is very effective

#VikramVedha Recieving Blockbuster reviews from all cinema critics! Congrats to whole team on the success#VikramVedhaReview #HrithikRoshan

‘Vikram Vedha’ is a remake of the Tamil film of the same name starring Vijay Sethupathi and R Madhavan. The original version was also directed by Pushkar-Gayathri. The remake also stars Radhika Apte, Yogita Bihani, and Rohit Saraf.

It will be clashing with Mani Ratnam’s period drama ‘Ponniyin Selvan’ which is a magnum opus that traces the story of the Chola Empire.

Saudi Arabia and Mexico clash in the final matchday of Group C with a spot in the last 16 at stake for both sides... but what time is kick-off? What TV channel is it on? What is their head-to-head record? And what is the team news?

WTCR Saudi Arabia: Berthon goes from hero to zero as series comes to a close

Soccer-Saudi Arabia's injured Al-Faraj out of the World Cup

– Claudine Barretto took to IG and asked for prayers for her safe operation – The actress revealed that she was at St. Luke’s Medical Center – Global City for her operation – Clau took the video at almost 5 a.m. as she was on a wheelchair being assisted – ...


View more: Indian Film Biz Needs To Focus On Story-telling, Not Just Scale, To Get Audiences Back Into Cinemas, Say IFFI Goa Panelists

'I suffered a lot... I should have given more': Argentina goalkeeper Emi Martinez reveals he visited a psychologist after shock defeat by Saudi Arabia in their opening World Cup match

Video: Nicole Kidman shocks audience as she makes surprise appearance at The Music Man in NYC and bids $100,000 for Hugh Jackman's signed hat