Walmart shooting death toll likely to rise as worker, 23, expected to be taken off life support

The death toll from the mass shooting at a Walmart in Chesapeake, Virginia, is likely to climb as a 23-year-old store worker is expected to have his life support machine switched off.

Blake Williams is currently fighting for his life on a ventilator and is unable to breathe on his own after he was shot by alleged gunman and coworker Andre Bing in Tuesday night’s massacre, according to his devastated cousin.

Bing, a 31-year-old night manager, opened fire on his coworkers inside the break room just after 10pm, before turning the gun on himself, police said.

Six Walmart employees were killed in the attack including Lorenzo Gamble, Brian Pendleton, Kellie Pyle, Randall Blevins, and Tyneka Johnson. The sixth victim, a 16-year-old boy from Chesapeake, has not been publicly named as he is a minor.

At least six other surviving victims were taken to local hospitals for further treatment, with three still hospitalised as of Wednesday morning.

Mr Williams’ cousin Shannon Cheetham told The New York Post that her younger cousin wasn’t even supposed to be working that night.

He usually worked day shifts because he took night classes at Tidewater Community College, but had agreed to cover a shift for a colleague on Tuesday.

Now, his family are preparing to have to take him off life support, she said.

“He never made it home. He wasn’t even supposed to be here. Wrong place, wrong time,” said Ms Cheetham.

The devastated 24-year-old told the Post about the moment she learned Mr Williams was caught up in the attack.

“I was at work and my aunt called me and I picked up the phone and her voice was cracking and she just hollered. Instantly I knew,” she said. 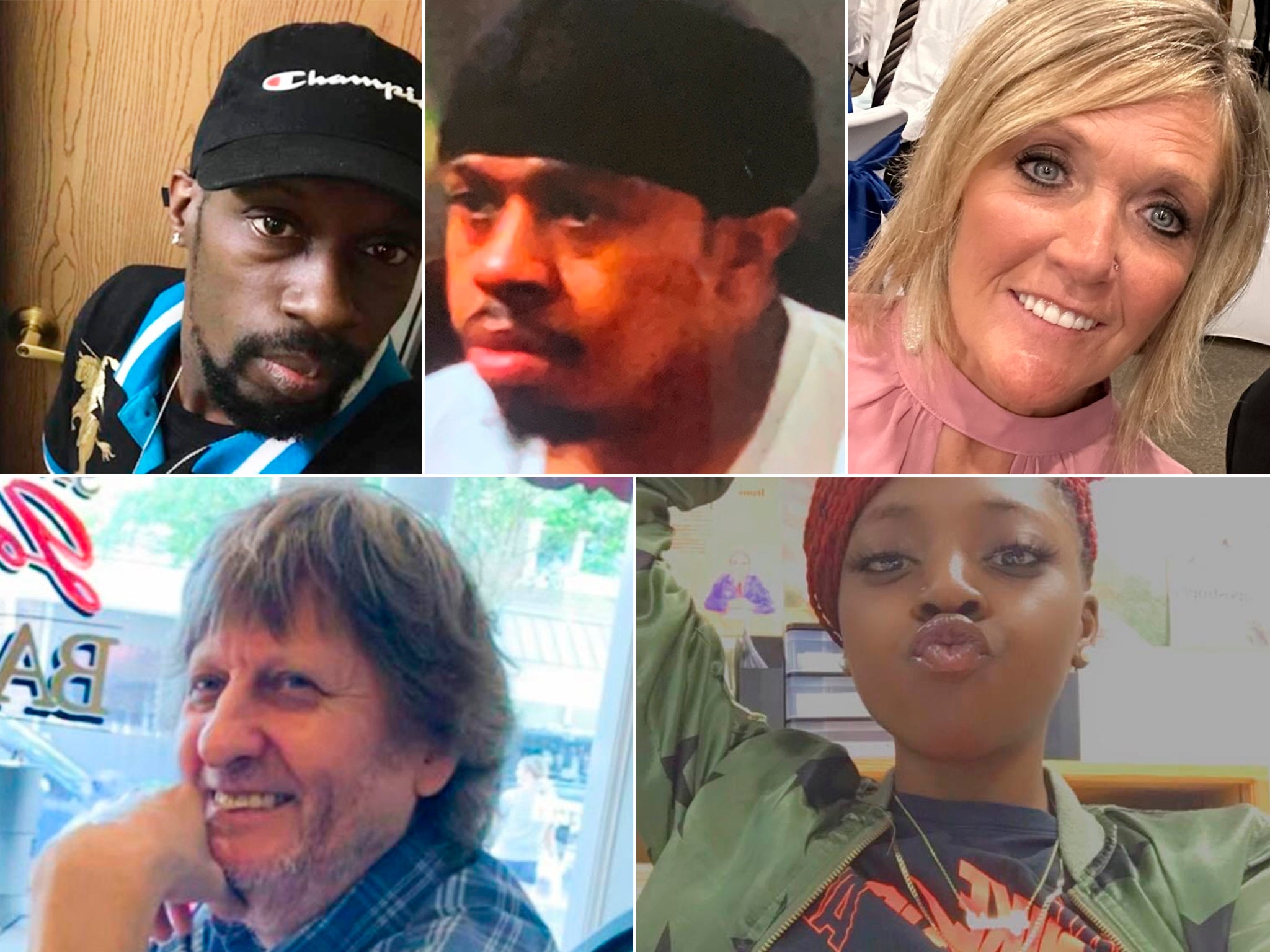 Six Walmart employees were killed in the attack including Lorenzo Gamble, Brian Pendleton, Kellie Pyle, Randall Blevins, and Tyneka Johnson. The sixth victim, a 16-year-old boy from Chesapeake, has not been publicly named as he is a minor (AP)

Ms Cheetham paid tribute to her cousin as “fun”, “outgoing” and “humble” with “a smile that lit up the room”.

She also revealed that she knew of Bing – the man accused of gunning down her cousin – saying that she often saw him around in the Crestwood neighborhood where he grew up.

When she visited the store where he worked, he would recognise her and “wave”, she said, adding: “You would never have thought somebody like that would do something so extreme. Blake never spoke bad about the job or Andre.”

Ms Cheetham also has mutual friends with one of the other victims Gamble and recalled a night where they “had a ball” dancing at a local bar.

The motive for Tuesday night’s horror attack remains unknown however a law enforcement source told 10 On Your Side that a chilling “manifesto” has been found on Bing’s cellphone in the wake of the attack.

In the manifesto, Bing laid out a potential motive for the shooting, saying he was “upset” about a recent change in employment status and complaining that he was being “harassed” by fellow employees.

Several of Bing’s colleagues have also spoken out to reveal that he had a lot of “issues” with other staff members and had displayed threatening behaviour in the run-up to the shooting.

Joshua Johnson, a former Walmart employee who worked as a maintenance worker at the store until 2019, said that the 31-year-old had given a harrowing warning about what he could do if he ever lost his job.

“He said if he ever got fired from his job he would retaliate and people would remember who he was,” Mr Johnson told CNN.

Another former employee, who worked with the alleged gunman at the store from 2015 to 2018, revealed that he was paranoid about the government watching him.

“He was always saying the government was watching him. He didn’t like social media and he kept black tape on his phone camera. Everyone always thought something was wrong with him,” said Shaundrayia Reese.

“He didn’t like to be recorded. He was always scared that the government was listening.”

Police were called to reports of an active shooting at the store at 10.12pm on Tuesday.

The first officers arrived on the scene two minutes later at 10.14pm and entered the store two minutes after that at around 10.16pm.

Officers found the suspect dead from a self-inflicted gunshot wound in the break room along with two of his alleged victims. Another victim was found dead toward the front of the store. Three other victims were rushed to hospital where they died from their injuries. 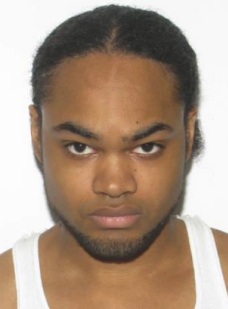 Andre Bing, 31, was identified as the shooter at the Chesapeake Walmart on 22 November 2022 (Chesapeake Police)

Police confirmed that Bing was armed with one handgun and several gun magazines and was dressed in civilian clothing at the time of the attack.

A search warrant was executed on the suspect’s home in the aftermath of the shooting, with Chesapeake Police Chief Mark Solesky confirming that there was “no ongoing risk to the public”.

Walmart confirmed that Bing was the overnight team lead at the store and had worked at the company since 2010.

The mass shooting marks just the latest to rock America, after a gunman opened fire inside an LGBT+ nightclub in Colorado Springs, Colorado, on Saturday night.

The massacre came to an end when heroic clubgoers tackled the shooter to the ground and detained him until police arrived on the scene.

This came after another mass shooting in the state of Virginia on 13 November, when three star football players from the University of Virginia were shot and killed as they returned to campus from a field trip.

Lavel Davis Jr., D’Sean Perry and Devin Chandler were killed in the attack, while two other were injured but survived.

Mr Jones was arrested the following day and charged with murder and other charges.

Back in 2019, a Walmart store was also the site of another horror mass shooting. A total of 23 people were killed in a mass shooting in a store in the city of El Paso, Texas.

VIDEO: The first glimpse of Mercedes F1 for 2023

Why did Trea Turner choose to sign with the Phillies?

Liberal and Labor are 'exactly the same'

Sky News Business Reporter Edward Boyd says in 2020 and 2021 a lot of Australians took out fixed-rate mortgages, and now after those two years people are going to start to feel the “pain”. Fixed mortgage rates ending will cause a lot of ‘pain’ to Australian households “People had mortgages ...


View more: Fixed mortgage rates ending will cause a lot of ‘pain’ to Australian households

A man requiring a wheelchair claims he was booted from his Qatar Airways flight after boarding the plane and left stranded at Melbourne airport because of his disability. The story of Craig Nolan, an Australian man with spina bifida whose plan to return to his home in Finland via Doha ...


View more: Australian man says he was booted from Qatar Airways flight because of his disability

A hidden camera and... that photo: 6 clues you may have missed in The White Lotus episode 6.

Mike White is a genius. Throughout season two of The White Lotus, he has dropped little clues about who will get murdered and who will do the… murdering. The simmering tension reached a crescendo in episode six, when the true motivations behind some of our characters were finally revealed. And ...


View more: A hidden camera and... that photo: 6 clues you may have missed in The White Lotus episode 6.

Sky News Business Editor Ross Greenwood says America’s oldest and biggest firearm manufacturer, Smith and Wesson, claimed sales fell 47 per cent in the second quarter of this year. “The company partly blames inflation for rising prices but also quelling consumer demand, but it does say that demand fell after ...

Pakistan lost the opening Test match of the series against England on Monday after they failed to chase down 343 runs with four sessions and more than 100 overs in hand. After losing two wickets early on the fourth evening, including that of captain Babar Azam, Pakistan were folded for ...

The Abercrombie Hotel is Back: Sydney Icon Scores a 24-Hour License

Everything you need to know about the Neighbours reboot!

‘We are going to see protests': Indonesia passes law banning sex outside marriage

Climate protester’s sentence is half that of Grace Tame’s abuser’s. Is this justice?

Six things we learned from the USA's World Cup exit

Did Jesse J get inspiration for Bang Bang from the Bunnings jingle?

'For those who like racing, Superbikes are much better than MotoGP' - Nicolo Bulega