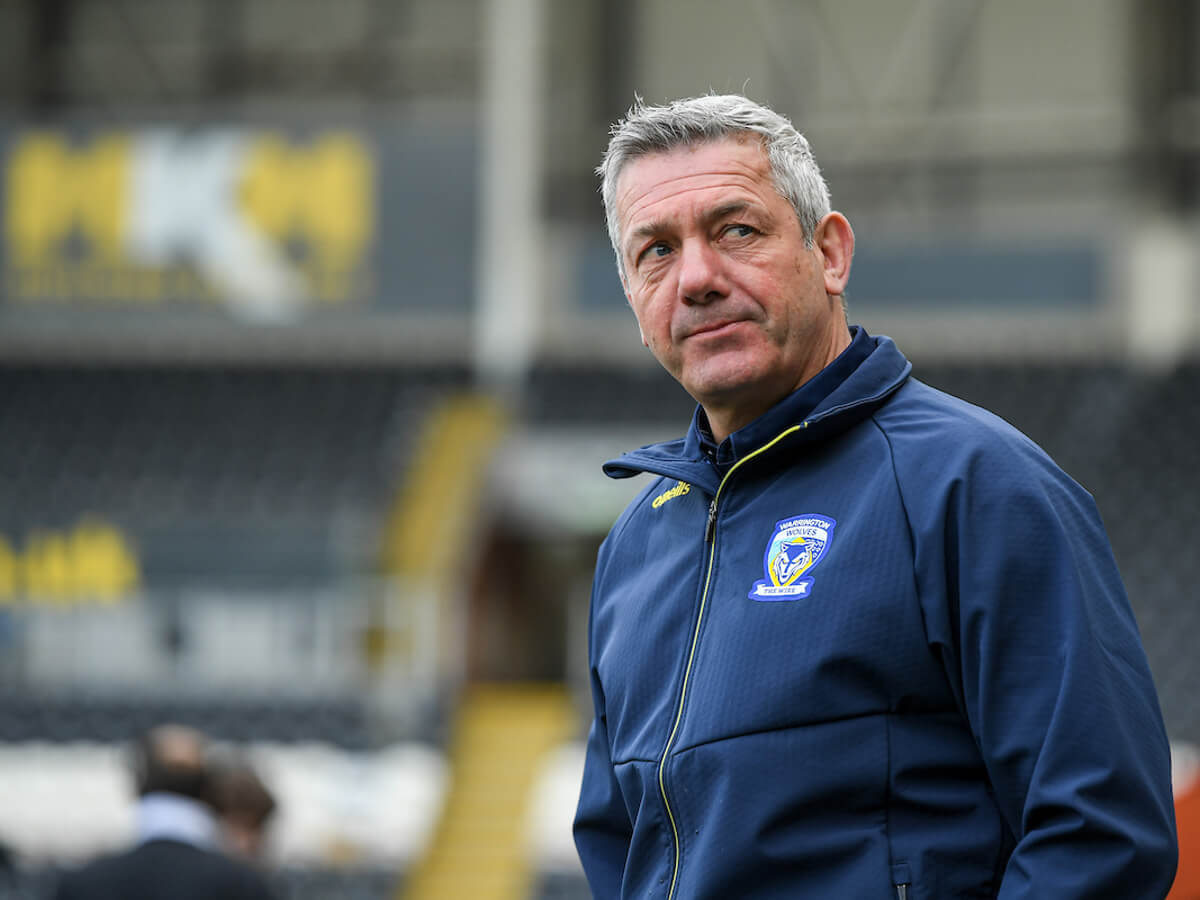 Recruitment plans at Warrington Wolves are well underway for the 2023 season, and head coach Daryl Powell has hinted that the club hasn’t finished yet.

There’s no doubting that Powell has a focus on building one of the strongest packs in Super League for next season.

Forward Thomas Mikaele has made the mid-season switch from the NRL, having made his debut against Wakefield. The club also confirmed the signings of Sam Kasiano and Gil Dudson earlier in May for 2023.

New South Wales and Italy international Paul Vaughan will also make the move to the Halliwell Jones Stadium from 2023 on a two-year deal. Connor Wrench also re-signed to a new three-year deal with the club.

And Powell has hinted at further recruitment and retention announcements for the 2023 campaign.

Speaking to Love Rugby League about his recruitment in the forward pack, Powell said: “I think that’s been a focus (building a strong pack). A pack that’s multi-faceted and an ability to play in different ways and it’s got size and robustness about it.

“We’ve got to get this year sorted first, that’s the priority. We can’t look too far ahead, but the way recruitment goes in this country, you have to discuss it while you’re ongoing with the season.

“Clearly we’ve worked hard in that regard. We’re still working on that.

“We’re still working on what that looks like. We feel like we’re in a good place in that regard. There will be announcements on retentions and recruitment in due course.”

31-year-old Vaughan is closing in on 200 NRL games, having made 196 appearances in his career so far. He has scored 29 tries across stints with Canberra Raiders, St George Illawarra and his current club in Canterbury Bulldogs.

He has won two caps for Australia and represented Italy at both the 2013 and 2017 World Cups.

“I had a zoom call with him this week and he’s a real good pro. The way he’s playing this year, he’s right up there with metres and post-contact metres.

“He’s high in the 90 percents in terms of tackle completion across the season. He’s a high quality player and alongside Thomas Mikaele as well, regular first grade players in the NRL and he (Vaughan) still has lots to offer.

“I think he’s a really important signing for us moving forward over the next two-years.”

PLAY: Our free Fantasy Rugby League competition is back for 2022

Video: EXCLUSIVE: Life in plastic is (not) fantastic! Jessica Alves vows to STOP having surgery as she poses for Barbie inspired shoot... but only after she gets her 13th nose job

Florida teen who ‘socked 9-foot shark in the face’ describes harrowing encounter: ‘Didn’t know exactly what to do’

Amazing natural arches from around the world

Ex-Owls striker Connor Wickham has been taken on trial by Championship club Reading. The 29-year-old was included in the Royals squad for their pre-season friendly against Colchester United on Saturday. Wickham is searching for a new club, having been released by Milton Keynes Dons following their play-off semi-final defeat. ...

Thieves stole equipment from a fire engine while crews were responding to a fatal house gas explosion Explosion in Kingstanding, Birmingham, on June 26 destroyed house and killed Doreen Rees-Bibb, 79Some 25 firefighters from six crews work with police, ambulance and gas crews to make the area safe But thieves prised open side shutter on vehicle and stole equipment including a pump, cutters and hose

Back in March, Jonny Edgar had been excited to start his second year in FIA Formula 3. Having joined reigning teams’ champions Trident from Carlin, the 18-year-old was looking to bounce back in 2022 after 2021 turned into a “difficult year; I struggled all year really.” The 2020 ADAC F4 ...

Five things you should know about Dina Asher-Smith

© Tim Clayton – Corbis – Getty Images Since her early days in athletics, the Olympic medallist has been one to watch The summer of 2022 is set to be a big one for Dina Asher-Smith. The British sprinter has a packed calendar of events, including the Commonwealth Games ...


View more: Five things you should know about Dina Asher-Smith

© PA Leicester City’s Youri Tielemans Newcastle United fans have shared mixed opinions over their club’s reported interest in signing Leicester City midfielder Youri Tielemans. The Foxes star has been widely tipped to move on this summer, having entered the final 12 months of his current deal. A host ...

Reading FC are waiting on as many as 20 other Championship clubs to reciprocate their £20 ticket offer for fans. Royals have long been championing the ‘Twenty’s plenty’ initiative, helping more supporters attend matches for affordable prices. The club has written to their 23 rival clubs in the second ...


View more: The 20 Championship clubs including Sunderland and Burnley yet to match Reading FC's £20 offer

Steven Gerrard looks set to have a new-look side ready for Aston Villa’s curtain-raiser after being very active early on in the transfer window. But fans are excited at the prospect of even more transfer business ahead of their first game against Bournemouth as the Villa boss splashes the ...

Shoppers left dismayed after price of Lurpak butter goes up to £7.25 a tub

London markets dragged down by retailer sell off

The 14-day self-care challenge everyone is doing on TikTok - and how YOU can get involved!

Why you should only buy Chardonnay in DARK bottles: White wine stored in transparent vessels reacts with light to develop nasty aromas like boiled cabbage and wet dog, study claims

What channel is England vs Austria on? Is the England Women game on TV? When is the Euro 2022 opening ceremony? Who are the BBC pundits, team news, kick-off time and latest odds

Couple who quit the rat race and poured their money into refurbishing a £244,000 derelict pub during Covid with no experience tell Ben Fogle how they survived by hiring MORE staff

Here's The Best Wines To Pair With Your Summer BBQ

Kate Bush 'earns £1.9million from her hit Running Up That Hill' after it featured in Stranger Things and soared to the top of the charts - 37 years after its original release

'Most beautiful girl in the world' Thylane Blondeau, 20, showcases her jaw-dropping figure in red bikini as she frolics on the beach in South of France

Wimbledon bad boy Nick Kyrgios is 'good for tennis', claims quarter-final opponent Cristian Garin... despite the Australian being fined almost £12,000 in just over a week for spitting towards spectators and swearing

EXCLUSIVE: Richarlison will have his debut at Tottenham DELAYED as the FA decide to hand him a one-match ban for his infamous firework-throwing incident at Everton, meaning he will miss facing Southampton but is back for Chelsea trip

Money Makeover: 'My rental is worth 26 times more – how can I avoid paying tax on the profits?'

Are YOU an overthinker? Psychologist reveals the 9 key signs - from getting anxious when you can't read someone's feelings to vividly replaying embarrassing moments

EXCLUSIVE: Jessica Alves vows to STOP having plastic surgery after spending £900k on procedures (but only after she gets her 13th nose job)

Moshe Feiglin: Those under 30 need to avoid COVID-19 vaccine like fire

Akwasi Brenya-Mensa is a chef you need to know about

Bad guy, unfair caricature or curiosity? Jury still out on Nick Kyrgios back in Australia

Video: 'I would have been the first one there': Logan Mwangi's biological father says he could have saved tragic five-year-old if social workers had told him his son was at risk

Married At First Sight's Domenica Calarco, 28, slammed for calling Robert Irwin, 18, 'so handsome' and asking him on a date to the Logies

From Vogue star to supermarket worker? Supermodel Marie Helvin, 69, escaped unfaithful marriage to David Bailey and found love with Duchess of Cornwall's brother - but is feeling the pinch after work fell off during Covid

‘Anything that makes them feel more included, we’ll do’: Cricket club ditches whites for black kit for male and female players to encourage girls worrying about periods to take up the sport

'It was such a tremendous honour to wield': David Harbour reveals sword he used to fight a Demogorgon in the Stranger Things finale is the 'actual' weapon used in Conan the Barbarian

Not so fancy! Inside the rundown Mullumbimby childhood home Iggy Azalea grew up in - as she reveals her real name

Birmingham City favourite breaks his silence on return to club