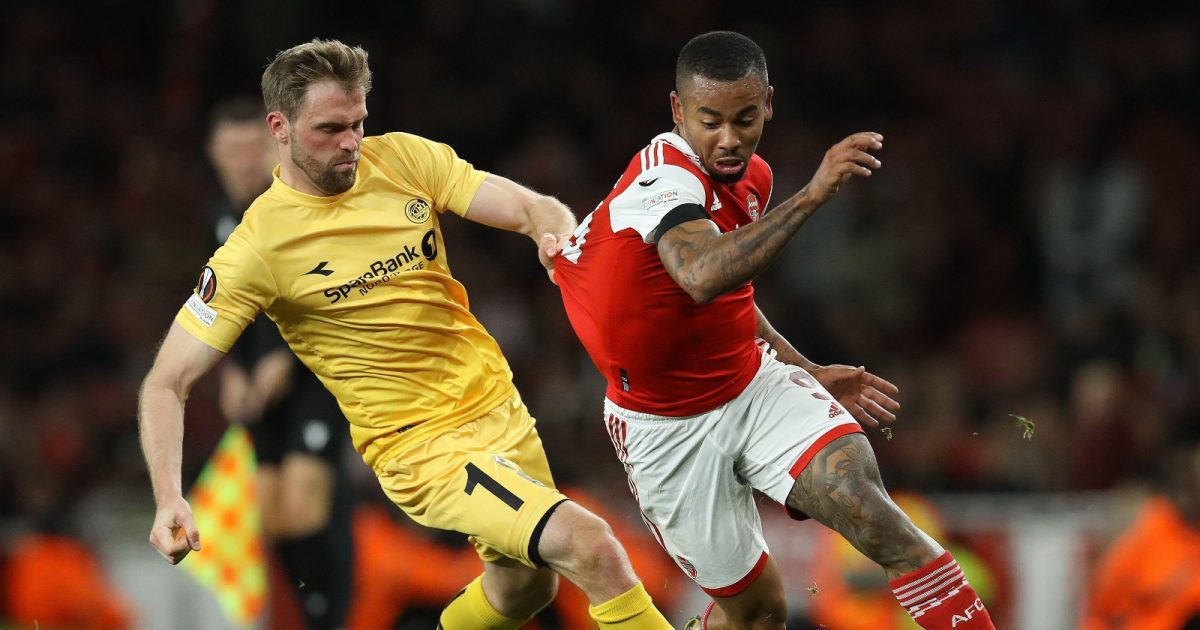 Gabriel Jesus of Arsenal and Brede Moe of Bodø/Glimt challenge for the ball during the UEFA Europa League match at the Emirates Stadium, London. 6th October 2022.

Gabriel Jesus provided yet more evidence that he’s a different beast at Arsenal this season with a scintillating cameo in last night’s 3-0 victory over Bodo/Glimt.

Mikel Arteta rotated heavily for the Europa League clash, resting Jesus and a number of other first-teamers following Saturday’s big win in the north London derby.

Eddie Nketiah and Rob Holding stepped up to the plate with goals in the first half, giving the Gunners a comfortable and well-deserved lead at the break.

At the hour mark, Arteta decided to put the result beyond doubt, bringing on Jesus alongside Bukayo Saka and Martin Odegaard.

In the closing stages, Jesus did brilliantly to burst into the box and tee up fellow summer signing Fabio Vieira.

Receiving the ball from a throw-in, the Brazilian caught the eye by pulling off a superb turn to beat his covering man and dart into the penalty area. An exquisite bit of footwork then beat a second covering defender, and from there he executed the comparatively simple task of cutting it back to Vieira for an easy finish.

It’s the kind of moment you want to watch again and again, and fortunately it was captured in all its glory from multiple angles. Every masterful touch shows a player absolutely full of confidence right now – and Arsenal certainly looks a comfortable fit for the 25-year-old.

“I was talking with him [Edu – technical director] about the first days when I signed here, I went to a Brazilian restaurant in London and I was waiting in my car outside and a lot of Arsenal fans came over to say welcome,” Jesus told BT Sport.

“It is different from City, I think City had a lot of impact in the last 10/15/20 years and then before Arsenal had A LOT, I feel that welcome – the way they come to talk to me, to say: ‘We are with you, we are supporting you’, I was happy with the fans at City but it is different [here].”

His manager is evidently satisfied with his contributions, too.

“I love his mentality. It doesn’t matter how long he plays, when he plays, in which position, he always gives absolutely everything,” Arteta told Arsenal.com.

“You see his pressing when he goes on the pitch, it makes the team different. His energy as well. Obviously today he (made) an outstanding action, to create the third goal.

“He has won everything in the last five years, imagine what the rest have to do, so follow him, because he’s always in the right spot.”