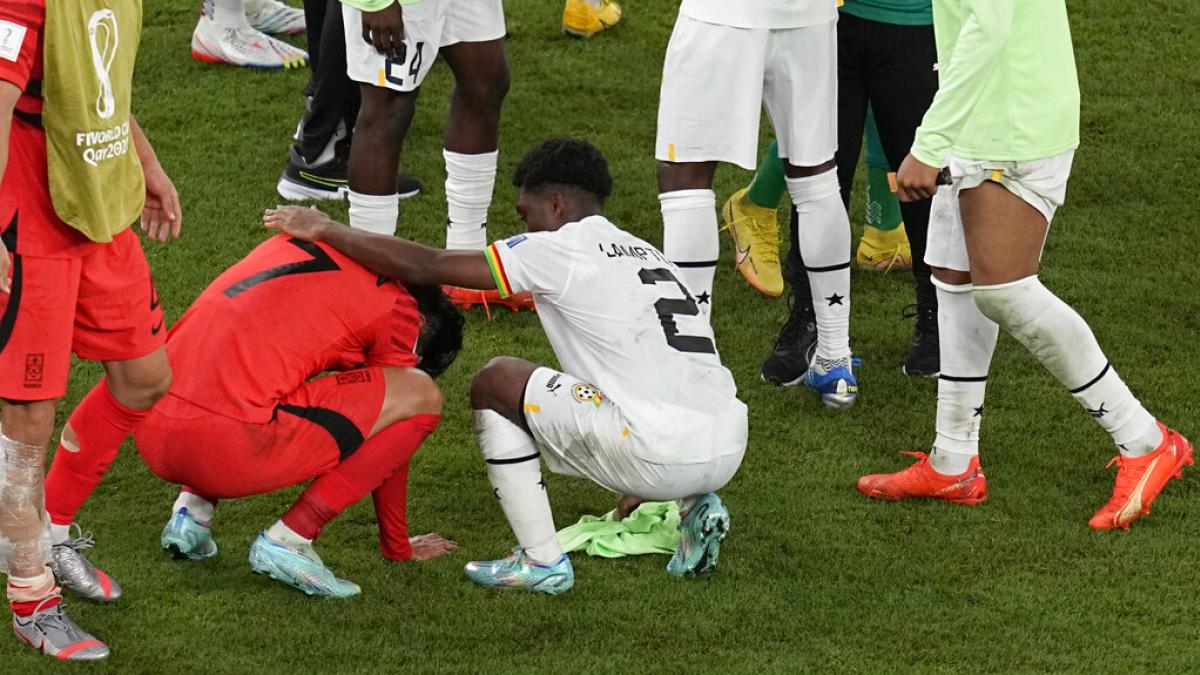 A member of Ghana’s coaching staff controversially took a selfie with a crying Son Heung-min after their 3-2 win over South Korea in Group H. Ghana emerged victorious in a hotly-contested match against South Korea at the Education City Stadium.

Son, who was emotional after the final whistle of the game, was in no mood for a photo and turned in the opposite direction, pulling away from the coaching staff member. Earlier, Son had also shrugged off his coach Paulo Bento after he tried to shake hands with him at the final whistle.

Ghana took the lead as Jordan Ayew’s well-taken free-kick caused all sort of chaos in the Korean box and Mohammad Salisu slotted it home. From then on, the Black stars were in full control of the game and doubled their lead in the 34th minute through Kudus. It was another Jordan Ayew cross that caused all the trouble for the Korean defence and the Ajax star made no mistake in heading it home.

South Korea got back in the game when Cho Gue-sung scored from a headed effort in the 58th minute. Three minutes later, Cho got his second of the game with another bullet header to make it 2-2 as he gave the Ghanian goalkeeper no chance of saving the goal.

Ghana wasn’t ready to be beaten on the day and Kudus made it 3-2 with a brilliantly taken shot in the 68th minut. Ghana held on till the end to claim the win and head on to face Uruguay with the hopes of qualifying for the next round. Korea will now have to beat Portugal in their last match.

Who were New England Patriots coaches Bill Belichick and Bill O’Brien talking with in Las Vegas? LAS VEGAS — The New England Patriots’ coaching staff began its first day of work at the East-West Shrine Bowl, one of the premiere showcase events for college football seniors ahead of the ...

The age of coffee-pod machines is, thankfully, coming to an end. TAG24 is here to show you the best way to brew coffee at home cheaply and easily, without the need for insane amounts of waste! Cappuccinos don’t need to be bought at the coffee shop, here’s how to make ...


View more: Best way to make coffee at home: Get rid of those pod machines and try this cheap method!

Meet Nils Jacobi, a wonderful cat photographer who is based in Germany. He came up with a creative kitty idea — to put some catnip on a glass table, place cats on top of it, and watch the magic happen from underneath. We fell in love with the video the ...


View more: ‘This Is What Happens When You Put Cats, Catnip and a Glass Table Together’ : Funniest/Fluffiest Feline Photos for a Human Laugh

A former police captain reacted on MSNBC to footage of a confrontation between Tyre Nichols and former Memphis police officers by asking whether the behavior is something these officers exhibited “nightly.” Nicholas died days after being pulled over for alleged reckless driving earlier this month. Body camera footage from the ...


View more: Former Police Captain Asks On MSNBC Whether Tyre Nichols Video Could Be Part of Trend: ‘Is This Something They Do Nightly?’

Live from the Alamodome in San Antonio, Texas, the WWE presents the 2023 Royal Rumble! If you’re a wrestling fan, there’s a very good chance that the Royal Rumble is your favorite premium live event of the year. The WWE’s beloved over-the-top-rope battle royal is an enthralling mix of action ...

Phil Mickelson makes fun of Sam Ryder’s joggers, gets it right back Phil Mickelson’s attempt at being cheeky backfired a bit Saturday afternoon on social media. As a jogger-wearing Sam Ryder began his final round at the Farmers Insurance Open, Mickelson took to Twitter to poke fun at Ryder’s ...

Billionaire Gautam Adani Loses $26 Billion in 3 Days The Indian tycoon and his empire are facing allegations of fraud by an American short-seller. Their answer does not convince investors for the moment. Last year, Gautam Adani, 60, was the star of all the rankings of the biggest fortunes ...