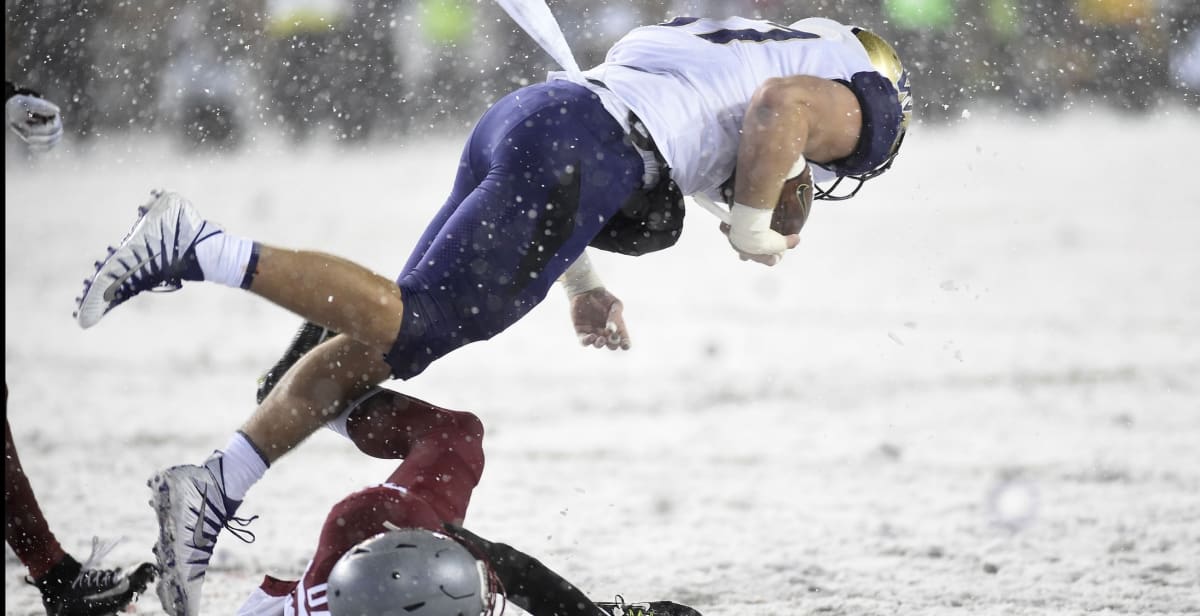 The prospect of snow in the Palouse is no concern for the Husky leader.

PULLMAN, Wash. — For all of the advanced research studies coming out of this modest college town hard by the Idaho border, meteorology has never been a highly reliable pursuit.

After all, practically no one saw it coming when snow buried Pullman and Martin Stadium overnight in 1992, and made a fifth-ranked University of Washington football team barely recognizable and prone to a 42-25 Apple Cup upset.

Twenty-six years later, the Huskies and Cougars began their traditional slugfest on a bare and dry playing surface, only to have a big snow dump turn the WSU field into Snoqualmie Pass over a matter of several minutes.

As the 12th-ranked Huskies (9-2 overall, 6-2 Pac-12) and the Cougars (7-4, 4-4) ready themselves for Saturday night’s 114th meeting, rain and snow are slight possibilities once more, though maybe for the end of the weekend. For sure, temperatures ranging from a brisk 32 to 39 degrees have been forecast.

The reaction to a testy atmospheric possibility by first-year UW coach Kalen DeBoer, who will coach his first football game in this sometimes wether-beaten environment, might not be one you would readily expect. Or maybe you would.

Rather than nonchalance, DeBoer grew up playing and coaching in the upper Midwest, where snow, slippery footing and generally uncomfortable conditions are part of his football DNA.

“Cold itself and maybe a little snow isn’t a big deal,” DeBoer insisted. “It’s probably a little wind and rain that you get into where the weather impacts you.”

The Huskies so far have been lucky with the weather this season, particularly when playing in a chilly but dry stadium at home alongside Lake Washington for late-starting games against Kent State, Oregon State and Colorado. The team in purple just hasn’t had many climatic stresses.

On the shoreline of Seattle’s big pond, temperatures typically drop into the 30s and the wind gusts pick up in November on game day, in particular this was the case during the UW’s recent 24-21 victory over the Beavers.

A few snow flurries isn’t going to alarm DeBoer and his staff in their first encounter on WSU’s home field in the chill of the Palouse.

“Cold is all relative,” the coach said. “It’s going to be mindset anyway.”

Go to si.com/college/washington to read the latest Inside the Huskies stories — as soon as they’re published.

Not all stories are posted on the fan sites.

Find Inside the Huskies on Facebook by searching: Inside Huskies/FanNation at SI.com or https://www.facebook.com/dan.raley.12