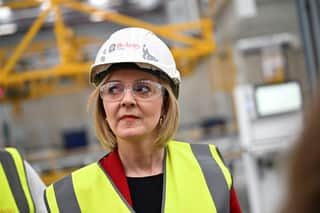 Liz Truss faced a series of tough interviews from local radio presenters across the country this morning (29 September) in which she doubled-down on her government’s recent policy decisions.

During her first set of media appearances since were announced last week, Truss maintained that the government “had to take action”.

Despite widespread criticism and concern that the last week could spark a financial crisis, Truss said there are “many different people with different opinions”.

Truss has been criticised following the interviews for failing to address concerns about the budget’s impact on the and the rise in interest rates which will see for many households.

‘Where’ve you been since Friday?’

Rima Ahmed of BBC Radio Leeds asked Truss whether she had slept well, before pointing out: “Since Friday, since your chancellor Kwasi Kwarteng’s mini-budget, the pound has dropped to a record low, the IMF has said that you should reevaluate your policies and the Bank of England has had to spend £65 billion to prop up the markets because of what they describe as a material risk”.

She asked: “Where’ve you been?”

Truss said that the country was “facing a situation where people could have had to pay energy bills up to £6,000,” so the government “had to take decisive action”.

Ahmed said that was “before the mini budget… where have you been, because we’ve not heard from you in the last four days?”

Later in the interview, Ahmed played Truss a clip from an interview with a man in Leeds who relies on a food bank despite working “harder than ever”.

Truss said that “the package we put forward on energy is likely to reduce inflation by up to 5%” meaning that people wouldn’t be facing energy bills of up to £6,000.

‘They’re putting out your fire’

On BBC Radio Kent, Anna Cookson read out a question from a listener asking Truss whether she was “ashamed of what you’ve done,” adding “are you?”

Truss said: “I think we have to remember what situation this country was facing, we were going into the winter with people expected to face fuel bills of up to £6,000, huge rates of inflation.”

Cookson cut in, saying: “And you’ve made it worse”.

Later in the interview Truss said the government was working “very very closely with the Bank of England,” to which Cookson responded: “They’re putting out your fire, to be fair.”

BBC Radio Stoke’s John Acres, asked Truss whether she had “taken the keys to the country and crashed the economy”.

He said the government’s borrowing would lead to higher mortgage costs.

Acres said: “We’re going to spend more in mortgage fees under what you’ve done based on the prediction than we would have saved on energy.”

Truss replied: “I don’t think anyone is arguing that we shouldn’t have acted on energy”.

On BBC Radio Norfolk, Chris Goreham pointed that out, “since Friday the IMF, the Bank of England, the Bishop of Norwich, the RSPB, wildlife trusts across the country have all spoken out against various parts of the mini-budget”.

He asked: “Can you reassure our listeners that your judgement is better than those well-respected organisations and individuals?”

Truss said that while there are “many people with many different opinions” the government “had to take action”.

What did Liz Truss say about fracking?

On BBC Radio Lancashire, where the decision to reverse the ban on fracking has been particularly contentious, Graham Liver asked Truss about the government’s previous pledge to only allow fracking to go ahead in areas which support such a move.

“Let’s talk about local consent right now, what does that look like?”

Liver pointed out that two local Conservative MPs claimed people in their constituencies didn’t support the return of fracking.

Truss said the energy secretary will lay out what local consent will look like, and that there are “various detailed issues to be worked through”.

Graham Liver said, “it sounds like you don’t know,” before highlighting that local MPs and the county council are opposed to it, and that “the science hasn’t changed” on whether fracking is safe.