She likes to surprise her audience at every show on her Las Vegas residency.

And Adele left one fan in hysterical tears as she chatted to them during a recent performance.

The singer, 34, stepped down from the stage to see one audience member who was filming the show and was left baffled by the fan’s video filter. 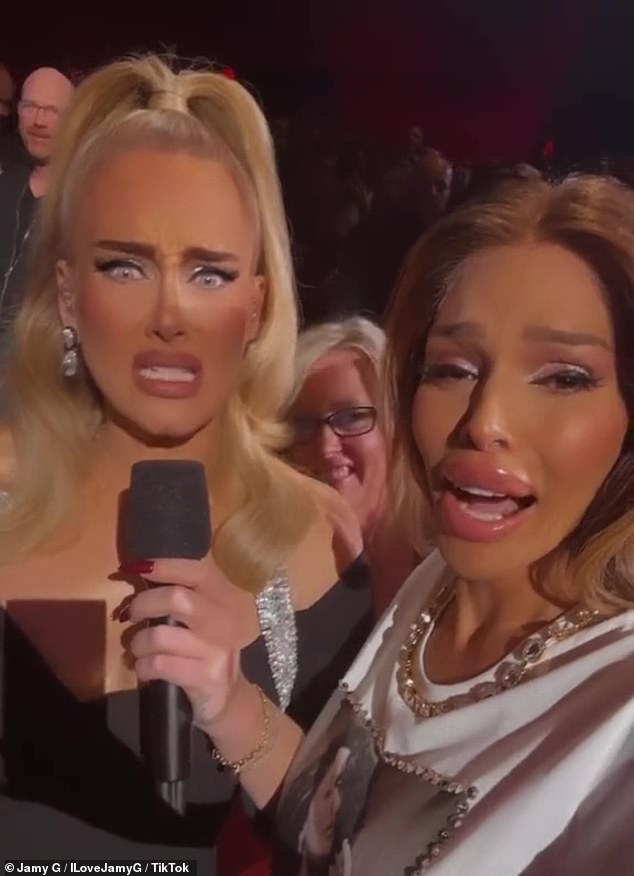 Surprise! She likes to surprise her audience at every show on her Las Vegas residency. And Adele left one fan in hysterical tears as she chatted to them during a recent performance

Looking at herself in the camera she exclaimed: ‘What have you done to my face?! Why do you have filters like that? You don’t look like that darling!’

Struggling to keep it together, the fan exclaimed: ‘I’m gonna pee my pants!’ as Adele attempted to find out her hometown and favourite memory as a child.

It all became a bit too much for the fan who burst into tears and was left unable to talk, sobbing ‘errrr f**k sorry’, as Adele hugged her and said: ‘baby, don’t cry!’ 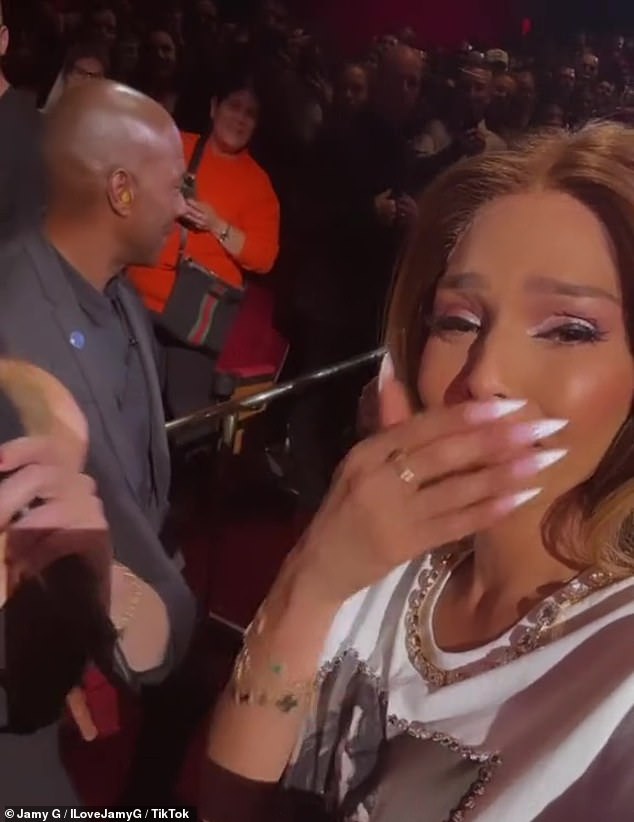 What’s going on here? The singer, 34, stepped down from the stage to see one audience member who was filming the show and was left baffled by the fan’s video filter 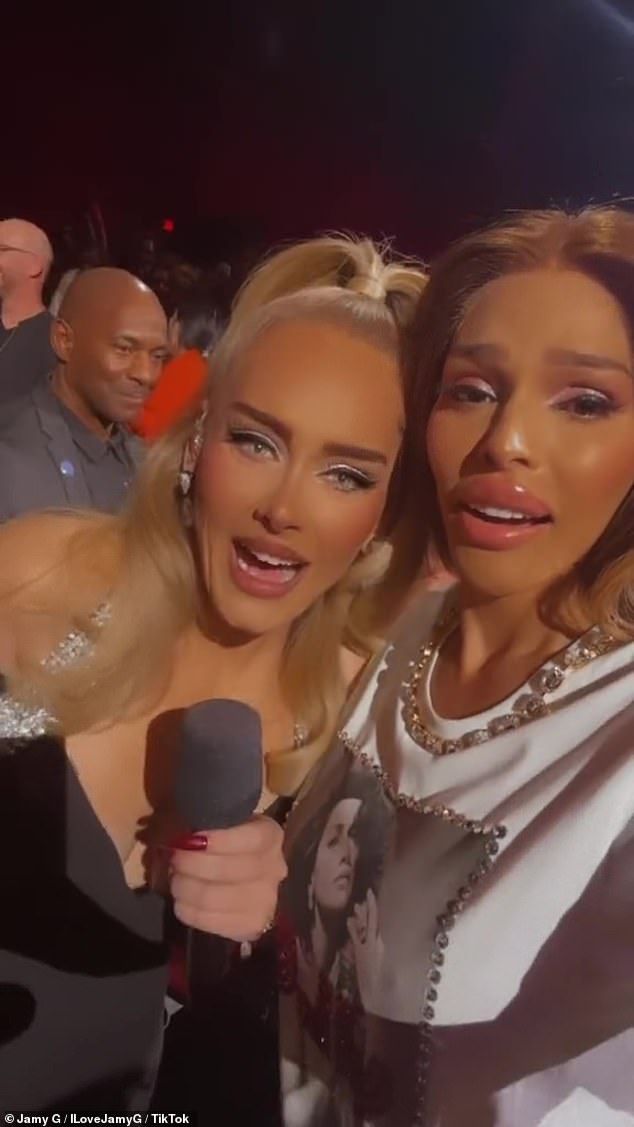 During her latest show, Adele also had a very famous face cheer her on, with country legend Shania Twain in attendance.

To tell fans the news, Adele posted a photo onstage where she wore a form-fitting black dress with a beautiful, sparkling garment accenting her outfit.

On the picture, posted to her Instagram story, the Skyfall singer wrote, ‘Thank god you had a hat on @shaniatwain I would have self combusted had I seen it was you!! I adore you, I can’t believe you came to my show [red heart emoji].’ 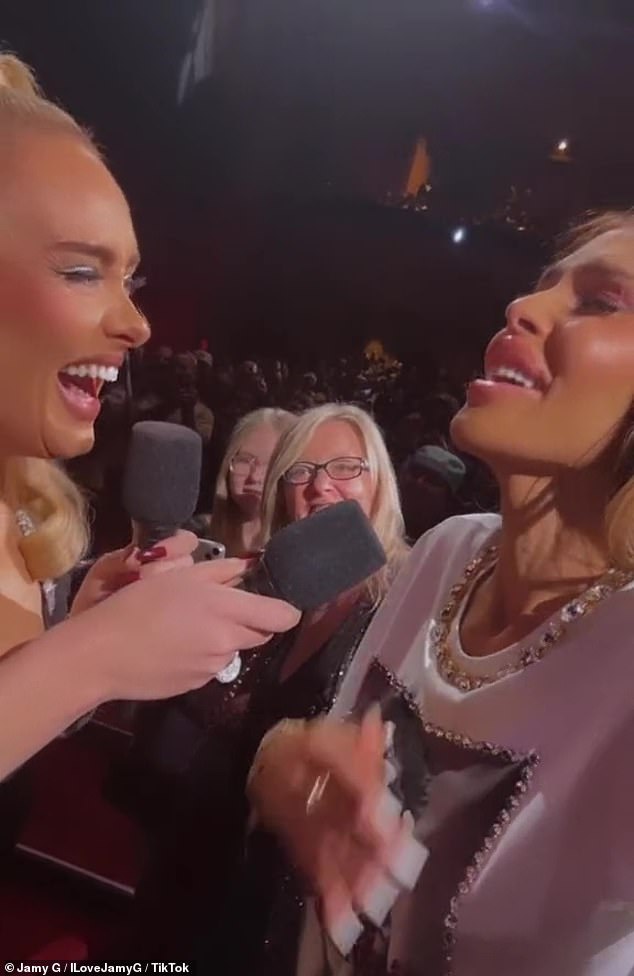 Cheeky: Looking at herself in the camera she exclaimed: ‘What have you done to my face?! Why do you have filters like that? You don’t look like that darling!’

Shania’s appearance at the show came on the same night the London native made a heartfelt tribute to her friend’s mother who recently passed away.

The Hello singer is said to have dedicated her emotional 2008 track Make You Feel My Love to her friend Raven Varona’s late mother during her performance on Saturday.

Raven, who is the official photographer for Adele’s residency, sadly lost her mother Leigh after the run of Las Vegas shows kicked off last weekend.

According to The Sun, Adele halted her gig to pay tribute to her friend’s mother, telling the audience: ‘I would really appreciate it if you could all put on your torches on your phone and shine them like stars so I know her mum can see us.’ 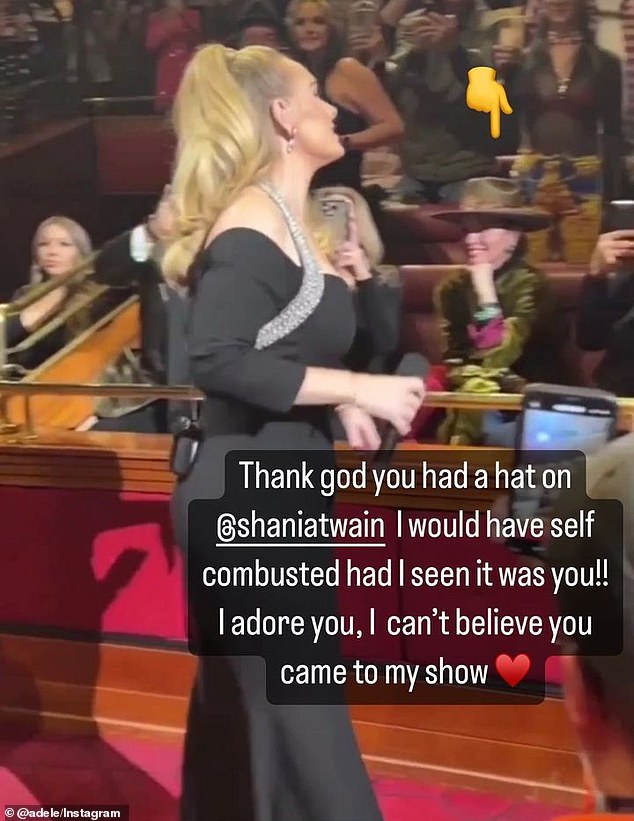 A legend: Adele revealed on Sunday that country legend Shania Twain attended her show in Las Vegas, part of her Weekend with Adele residency

A source also told the publication that the passing has hit both Adele and Raven ‘hard’, adding that Adele told her friend to take as much time away from work as she needed.

They said: ‘For the past 12 months Adele’s focus has been on these Vegas shows but despite being under serious pressure herself, when Raven lost her mum she rushed to offer support.

‘Family is a massive thing for Adele and she was keen to make it clear that she could take all the time she needed away before returning to work, the passing has hit them both hard.’


But Raven decided to still cover Adele’s second weekend of Las Vegas shows, and she later took to Instagram to thank Adele for her heartfelt tribute.

Sharing photographs of Adele on stage, Raven penned: ‘One of the last things I got to do with my mom on the Sunday before she passed was show her the photos from weekend 1.

‘I was so excited to show them to her and was hopeful I’d be able to bring her to one of the shows. Thank you Adele and everyone at the show for honoring my mom. I felt her there the whole time.

‘She was and will continue to be my driving force, so going to work felt honorable to her. I love you A x.’ 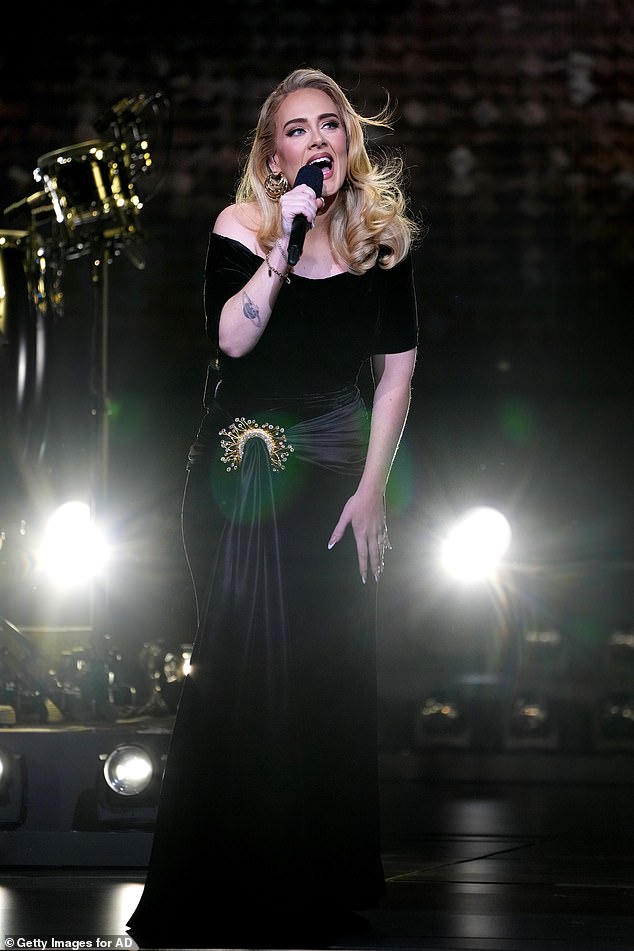