What Is a Valet Key and Why Is It Potentially Dangerous?

Does your car have a valet key? If not, don’t worry, as not every car has them, especially newer ones. However, if your car did come with a valet key, then it’s a usually different color than the other car keys – most likely gray. If you do have one, then here is why it could potentially cause some danger.

Why do cars have a valet key? 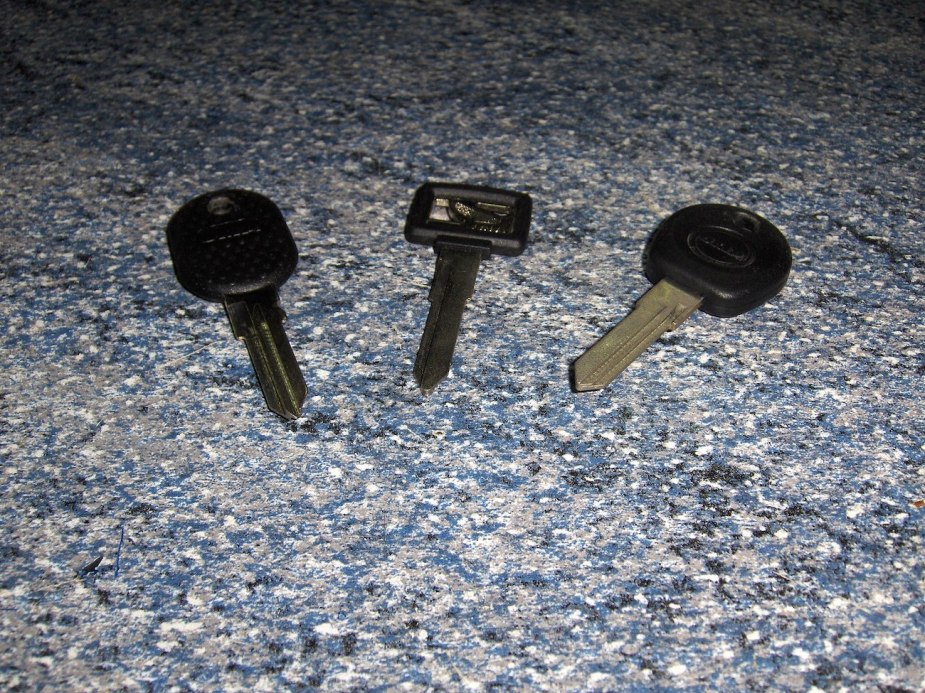 A couple of car keys next to a valet key. | Wikimedia Commons

A valet key is a spare key that you can give to valet parking attendants and repair shop mechanics so that they can drive the car but can’t access a locked trunk or glove box. Family Handyman notes that brands like BMW and Audi typically supply valet keys and some sports cars on the market come with them as well.

Why is a valet key potentially dangerous?

Car thieves have targeted valet keys for a long time. If you have a valet key, then chances are that you have it stored away in your home somewhere. No, you don’t have to wrap it in tin foil, but keeping it safe in a storage box or safe is a good idea. However, many car owners keep their valet keys inside their car’s glove boxes or in the owner’s manual sleeve.

This is a bad idea because car thieves know this and can easily access the key after breaking into the car. With the valet key, it’s easy to drive off with the car without the owner even knowing what hit them.

Do cars with a push-button start have a valet key? 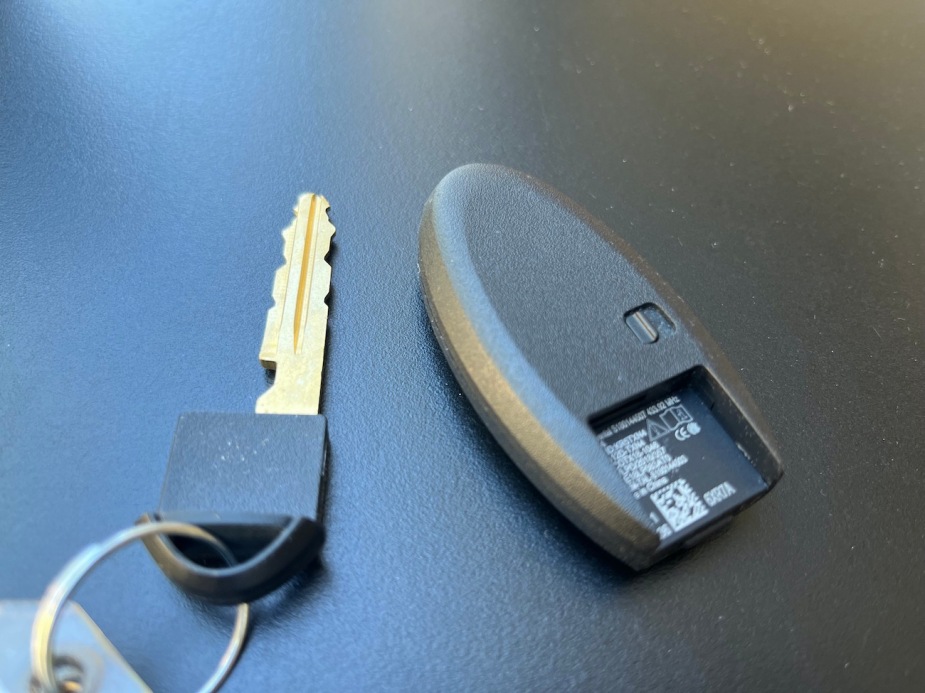 A Nissan key fob with the valet key next to it. | Joe Santos, MotorBiscuit

Yes, cars with push-button start ignitions still have valet keys. The remote key fob typically has a physical key inside of it. If you take it out, you can hand the fob to the valet attendant or mechanic so that they can start and drive the car but can’t access the glovebox or trunk.

How far can you drive with a valet key?

Since the valet starts the car like a regular key, the car can be driven like normal. That means if a car thief gets ahold of your car’s valet key, they can steal the car as if they had the main key or fob.

Some newer cars have a valet mode instead of a key

A couple of car keys next to a valet key. | Wikimedia Commons

If you own a newer car, it may have a “valet mode” that you can put into when parking the car. In some cars, like the Tesla Model S, the mode will allow you to set a speed limit in addition to controlling the accelerator and other controls. Other cars, like the Nissan Leaf and some Hyundais, have phone apps that will alert the owner if the car has moved outside of a certain perimeter of the drop-off location.

Be careful with your car’s valet key

In conclusion, if your car has a valet key, keep it in a safe place until you know you’re going to use it. If it falls into the wrong hands, you could be filing a police report as opposed to driving home safely after dinner. Although it keeps unsavory people outside the car’s trunk and glovebox, they can still drive the car.

The 5 Automakers With the Best Rear Cross Traffic Warning (RCTW) Safety System, According to Consumer Reports

What Are Driver-Based Exclusions?

Watch out for These 2 Damage-Based Exclusions

Here’s What To Do if Someone Is Following Your Car

What Is an Out-of-Country Exclusion?

What Are the 8 Parts of a Spark Plug?

The 3 Automakers With the Best Automatic Emergency Braking (AEB) Safety System, According to Consumer Reports

What Is a Personal Property Exclusion?

The 4 Automakers With the Best Lane Keeping Assist (LKA) Safety System, According to Consumer Reports

The Most Popular Pickup Truck Is Also 1 of the Safest

The Ford F-150 full-size pickup truck is very popular. It continues to be the best-selling truck, as people are drawn to its excellent performance, towing prowess, off-road capabilities, configurability, and premium features. The Ford F-150 is also one of the safest pickup trucks — as evidenced by its Insurance Institute ...


View more: The Most Popular Pickup Truck Is Also 1 of the Safest

How Do You Jump-Start an Electric Vehicle (EV)?

Electric vehicles (EVs) and gas-powered vehicles are similar in most ways. They look the same, can take you from point A to B, include the same features and amenities, and typically present the same problems. In fact, the powertrain, which, in an EV, is the biggest thing that separates the ...


View more: How Do You Jump-Start an Electric Vehicle (EV)?

Sometimes a car you buy comes with unfixable problems. This can cause major concerns for car safety. These problems can be unfixable because the issue can’t be fixed with a recall or the automaker refuses to issue a recall because it would be too costly for them. The good news ...

The 4 Automakers With the Best Lane Departure Warning (LDW) Safety System, According to Consumer Reports

Modern cars offer many Advanced Car Safety Systems (ACSS) or Advanced Driver Assistance Systems (ADAS), such as Lane Departure Warning (LDW), as standard or optional driver assistance features. However, some automakers integrate these safety features more successfully than others. Here’s a look at the four automakers with the best Lane ...

Despite modern car safety features, traffic deaths are on the rise. However, driving tends to be safer in some U.S. regions than others, and NHTSA data from the first half of 2022 shows some states have significantly lower traffic fatality rates. For instance, one Northeastern state reported only 14 traffic ...

Headlights are easy to overlook but get everyone’s attention when they’re too bright. Several GMC Terrain model years are under recall for that very issue. But some owners are not happy with GMC’s solution. One owner even calls the fix “unprofessional and ridiculous.” A recent GMC Terrain headlight recall affects ...

Regarding car safety in hot weather, buying a vehicle with light-colored seats is tempting, as most people believe it keeps a car’s interior cooler than darker-colored ones. However, it’s not really true. Both colors increase the internal temps so high that it could cause death for children or pets left ...

Parents Prepare: Many Teens Are Destined to Learn How to Drive Using EVs

Right now, not many people drive EVs, but that’s changing very quickly as more folks buy electric vehicles and as EVs get cheaper overall. It’ll take a while before EVs truly replace gas-powered cars, but that time is coming, and what that also means is that kids and teens are ...


View more: Parents Prepare: Many Teens Are Destined to Learn How to Drive Using EVs

Audi Is One of the Safest Luxury Automakers, Says IIHS

All-Wheel Drive (AWD) in a Minivan: Necessary, Pointless, or Fun?

The 5 U.S. States With the Highest Traffic Death Rates Are All in the South

2 Days of the Week Are the Deadliest Times to Drive, NHTSA Data Shows

5 Most Common Car Crashes in the U.S. and How to Avoid Them

The 3 Automakers With the Best Blind Spot Warning (BSW) Safety System, According to Consumer Reports

10 Minivans, Trucks, and SUVs With More Than 10 Cupholders

What Is ‘Lemon Law’ Legislation?

The 4 Automakers With the Best Forward Collision Warning (FCW) Safety System, According to Consumer Reports

1 State Has the Highest Traffic Death Rate in the U.S.

4 Steps to Take if Your Vehicle Is Involved in an Unfixable Car Recall, According to Consumer Reports

The 3 Safest Small Cars Under $25,000 Earned the Top Safety Pick+ Title From the IIHS

What Is a Business Vehicle Exclusion?

Why Do Speedometers Go to 160 MPH if You’re Not Allowed to Drive That Fast?

3 Factors That Contribute to Road Rage

Apple’s Crash Detection Calls 911 From Roller Coasters, but What About Cars?

Parking on Leaves Can Make Your Car Start on Fire

Spark Plugs Versus Glow Plugs: What Is the Difference?

Mercedes aims for zero crashes by 2050

Roundabout and Traffic Circle Rules You Should Never Break

6 Possible Reasons Your Car Is Leaking

What Are the Ridges on the Other Side of an Ice Scraper Used For?

5 of the Rudest Things You Can Do While Driving

Are Roundabouts and Traffic Circles the Same? The Answer Might Surprise You

Is the 2022 Toyota Camry Dangerous, According to the IIHS?

Rivian recalls nearly all of its vehicles built to date

Who Invented the Roundabout?

Is It Illegal to Drive With a Handicap Parking Permit on Your Rear-View Mirror?

How to Prevent Road Rage: Remember These Tips When Road Rage Brain Tries to Take Over

Why Do Cars Need Spark Plugs?

If You Do These 5 Things, You Might Have Road Rage

Is It Illegal to Drive With a Facemask Hanging From Your Rearview Mirror?

Volvo EX90 occupant sensing system could save a trapped loved one