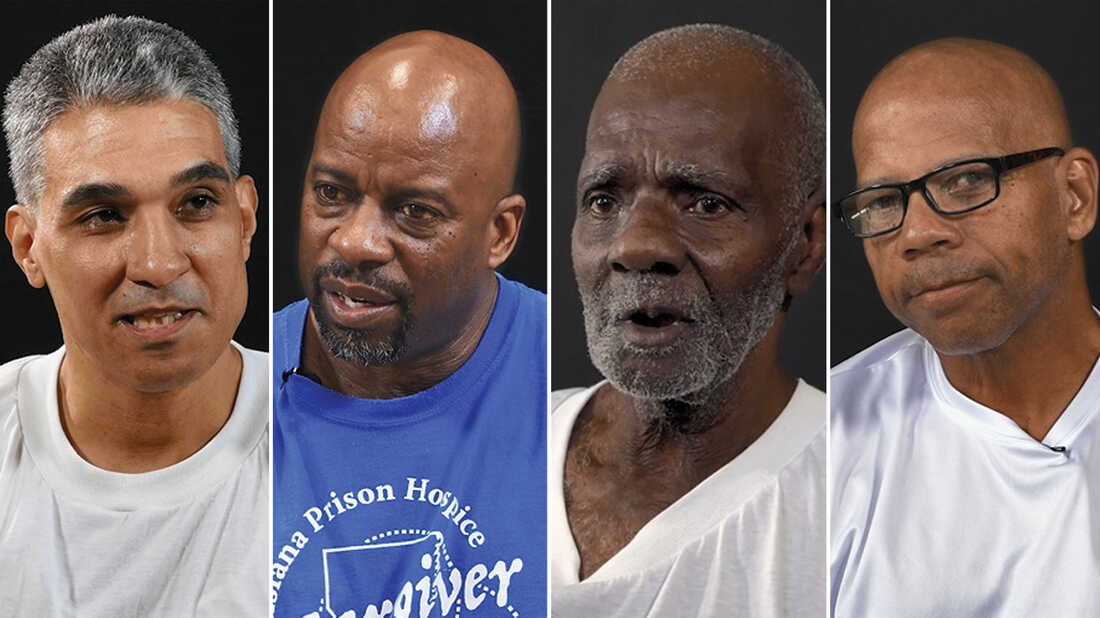 When Calvin Duncan was 19 years old, he was arrested for a murder he didn’t commit.

Not everyone was legally innocent, of course. Duncan says a lot of people were led astray by drug problems or poverty. And they made mistakes. Life-changing mistakes.

“They went down that path, you know, committing petty crimes. And then in some cases, it escalated into a murder that they regret,” he says.

Since becoming a free man in 2011, Duncan has dedicated his time to telling the stories of those still inside, through an immersive digital experience called The Visiting Room Project. Filmed at Angola, the Louisiana State Penitentiary, the project contains 100 interviews with prisoners serving life sentences without parole, and allows the public to watch and listen to the men tell their stories in their own words.

Sammie Robinson says life in prison now is very different to when he first entered.

The definition of a “life sentence” has changed

When Duncan reflects on his time inside, the thing that disturbs him most is how young some of his fellow inmates were when they landed in jail. He says so many of them hadn’t developed emotionally or mentally enough to fully understand what was happening.

Duncan, like many of those young men, was supposed to serve a life sentence with no possibility of parole. Then The Innocence Project stepped in and, ultimately, he was exonerated after more than two decades.

When Duncan finally left prison, he couldn’t forget the men still locked up. He wanted to find a way for the public to get to know them like he did. That’s what led him to meet Marcus Kondkar — a sociologist professor at Loyola University in New Orleans — whom he co-founded The Visiting Room Project with.

“He would share with me about what the data showed, how many people was serving life in prison without parole in Louisiana,” Duncan says. “But what the data didn’t show was who those men were.”

Duncan had a special insight into that. He’d spent his time in Angola becoming a lawyer. So he heard a lot of personal stories from his fellow inmates who came to him for legal advice.

“For 23 years, my job was to assess people sentenced to death and also people that was wrongfully convicted,” he says. “I saw them mature into productive men. And they became the mentors of the prison — the cooks, the horsemen. They became the preachers; in some cases, like myself, became lawyers, jailhouse lawyers.”

Duncan’s success story of getting released is rare, especially in the state of Louisiana. The chances of getting a life sentence commuted or overturned there are barely 1%. And Duncan’s former prison, Angola, has a significant role in the state’s history of prison policy.

Life sentences weren’t always a “no way out” situation. For most of the 20th century, the meaning of a life sentence in Louisiana was 10 to 15 years. People serving life sentences could seek a commutation after 15 years. In 1926, Louisiana shortened that time to 10 years and six months to save costs at Angola. This became known as the “10/6 law,” under which the state released more than 90% of people with life sentences through commutations. This was common in 13 other states at the time, too.

That all changed in 1972, after the Supreme Court temporarily struck down the death penalty. All prisoners on Louisiana’s death row had their sentences converted to life. And after deciding that the life sentence itself needed to be harsher for these prisoners, Louisiana started establishing higher year minimums before parole eligibility. The state started with a 20 year minimum in 1973, raised it to 40 years a few years later — before ultimately abolishing parole eligibility altogether for anyone with a life sentence.

Gordon Newman says he feels “terrible remorse” for his actions.

“A lot of us are volunteering to the hospice program,” says Terry Pierce, one of the interviewees in The Visiting Room Project. “We’re nursing people who, just like us, came here young and are dying in prison. Hospice gives us a glimpse of what we are headed for.”

Angola’s first prison cemetery is full. They built a second one but that’s almost at capacity, too.

Duncan wants people to see prisoners as more than a number

When asked how his interviewees felt about sitting for the project and sharing their personal stories with strangers, Duncan says they were thankful.

“Nobody had knew the trauma that they had experienced,” he says. “Allowing them to have space for which they could tell they story — not the story about their crime, but who they are now — The Visiting Room gave them that opportunity.”

“Because when you’re in prison, one of the things you don’t do, you don’t show weakness. You grow up as a kid not even being able to express yourself. To finally get a chance to say out loud this is who they are, that was the thing that they was most grateful about, is being given that opportunity.”

Gordon Newman says he feels “terrible remorse” for his actions.

And as for his own hopes for the project? He wants people to stop seeing prisoners as numbers and data. And instead, see the men who became his friends — and the man he was for more than 20 years.

“We should get to know the person that the data represents,” he says. “I would hope that people realize that young people make mistakes. In a lot of cases, they make terrible mistakes. Once they brains begin to develop, they become productive people, people that we would become proud of.”

The radio interview was conducted by Juana Summers, produced by Lauren Hodges, and edited by Sarah Handel.

BRUSSELS —  Law-enforcement authorities in six different countries have joined forces to take down a “super cartel” of drug-traffickers that controls about one-third of the cocaine trade in Europe, the European Union’s crime agency said Monday. Europol said 49 suspects have been arrested during the investigation, with the latest series of ...

Almost three years of lockdown measures have dragged down the Chinese economy and pushed youth unemployment to nearly 20%. UBS strategists noted that a widening of infections could exacerbate global supply chain interruptions and cause domestic headwinds to spill into global markets. “While the setback to sentiment from protests ...

Ryder Cup hopeful Seamus Power has been named in the Great Britain and Ireland team to face a Continental Europe side in next year's Hero Cup in Abu Dhabi.


View more: Gareth Southgate hints that Phil Foden has a big role to play for England at the World Cup

Extremism experts and historians sound alarms as politicians, media personalities and celebrities amplify antisemitic conspiracies that have historically led to the killing of Jews.

Advocates say discontent with public schools’ pandemic rules and teachings on race and gender identity have helped raise support for school choice to an all-time high.


View more: Some Republicans are optimistic about enacting school choice in next year’s session — but it might not be so easy

Karen Bass’ victory in the Los Angeles mayoral race was another blow to the popular caricature of Latino voters as trending conservative. The results suggest that the city’s mostly young Latino electorate embraces Black-brown solidarity. The up-and-coming Latino rejects the anti-Blackness espoused by Gen X and baby boomer city leaders ...

Cameroon Scores Two Goals in Three Minutes to Draw Even Vs. Serbia

China Covid protests: Why are people demonstrating in Shanghai?