Which iPad should you buy on Prime Day 2022?

Amazon’s annual Prime Day deals are almost here, and if you’ve been thinking of using this opportunity to pick up an iPad among Prime Day Apple deals, you’re in luck. The iPad is already at the top of our best tablets list, and Apple’s lineup is in better shape this year than ever. There are excellent choices across the board suitable for budgets of all shapes and sizes, and finding the best Prime Day iPad deals could bring the iPad you want even more within your reach.

Of course, Prime Day tablet deals can go pretty fast, so it helps to be prepared in advance, so you’ll know which is the best iPad to get on this year’s Prime Day.

Which iPad should you buy on Prime Day 2022?

During last year’s Prime Day, we said Apple’s 2020 iPad Air was the best value you could get, and we’re doubling down on that recommendation this year with Apple’s recently released fifth-generation iPad Air. This latest model takes everything great about its predecessor and dials it up to 11, narrowing the gap even more between Apple’s mid-range and high-end iPads. It’s not the most affordable tablet out there, but the iPad Air offers the best bang for your buck. It now packs in the same Apple M1 chip found in the iPad Pro, plus an edge-to-edge Liquid Retina display, Touch ID side button, and a USB-C connector. You also get 5G connectivity if you opt for the Wi-Fi with cellular model.

The 2022 iPad Air is also compatible with all the same accessories like Apple’s Magic Keyboard and the second-generation Apple Pencil. It also sports the same 12-megapixel quality of the front and rear cameras. The only thing you’re giving up over the more expensive iPad Pro is Face ID, four-speaker audio, the LiDAR-equipped dual-lens rear camera system, and the 120Hz variable-refresh rate ProMotion display. These are all great features for pros, but most tablet users likely won’t miss them.

Just be aware that the base model iPad Air still comes with a somewhat paltry 64GB of storage, which likely won’t be enough for anything more than very casual use. You’ll typically pay a $150 premium to jump to the 256GB model, but with many Prime Day iPad deals on now, it’s an excellent time to find a better price on that upgrade. It’s very much worth it if you plan to hold onto this tablet for a while, which you should because Apple will likely support it with iPadOS updates well into 2027.

Don’t let the older design fool you into thinking that Apple’s 2021 iPad isn’t worth a look. While it doesn’t have the nicer squared-edge design and edge-to-edge display of Apple’s more expensive tablets, it’s still a solid choice for more casual tablet users.

Featuring the same A13 chip used in Apple’s iPhone 11 lineup, the 2021 ninth-generation iPad is no slouch in performance. It can handle the latest games, and the 10.2-inch LCD screen offers the same brightness, sharpness, and clarity as Apple’s more expensive iPad Air. It even supports Apple’s True Tone technology for unsurpassed color accuracy. 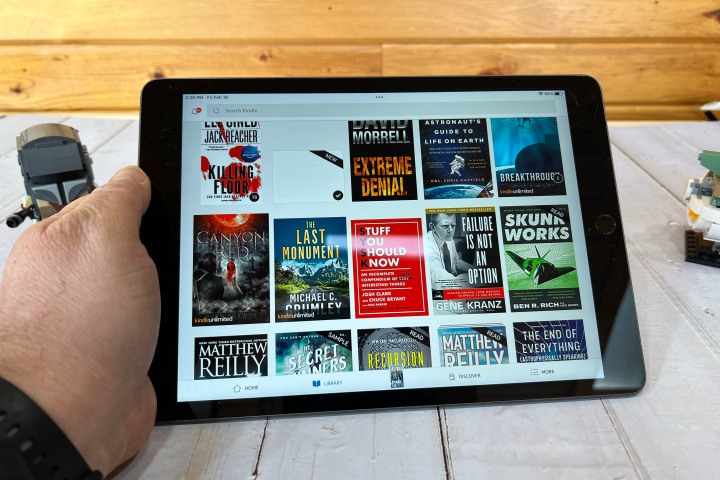 The 12-megapixel ultrawide front camera is identical to the one in the iPad Air and supports Apple’s Center Stage feature, making it well-suited for FaceTime and Zoom calls. The rear camera is less impressive, but most people aren’t buying an affordable tablet to take great photos.

With its older design, the entry-level iPad also still uses Apple’s Lightning connector. That’s not a problem if you also own an iPhone, but it’s notably the only iPad that hasn’t made the switch to USB-C. It’s also not compatible with the newest iPad accessories, although since this classic design has been used for years, you can find a wealth of Bluetooth keyboards and cases for it at much more affordable prices.

You’ll also be limited to 4G speeds on the Wi-Fi with cellular model, as Apple hasn’t stepped this one up to 5G. However, we don’t recommend opting for cellular on this one; if you’re willing to spend more than the base asking price, you’re far better off going for the 256GB upgrade, which is less expensive than opting for the 64GB Wi-Fi  with cellular version.

If money is no object, then Apple’s iPad Pro is the one to buy. The 11-inch model offers all the bells and whistles a serious tablet owner needs — at a price to match.

The M1 chip inside delivers the same performance as Apple’s 2020 MacBook lineup. The USB-C port also supports Thunderbolt and USB 4 for high-speed data transfers, and the 120Hz ProMotion display is buttery smooth for gaming, scrolling, and drawing with an Apple Pencil. The Wi-Fi  and cellular model also offers 5G with mmWave support, although this won’t matter much unless you live or work in a densely populated city center where those ultra-fast speeds are available. 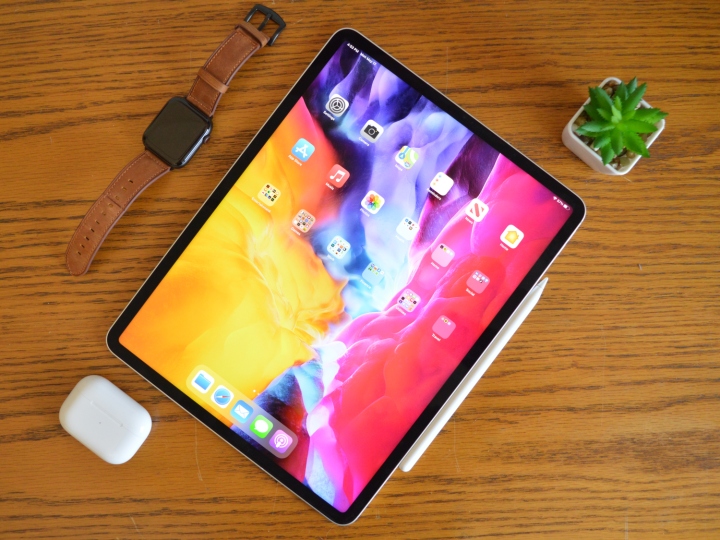 © Provided by Digital Trends The iPad Pro 2021 on a table, showing the screen.

While you probably don’t need to spring for the 1TB or 2TB versions, we’d recommend stepping up from the 128GB base model to at least 256GB if you can afford it. That 128GB will fill up quickly if you’re using the iPad Pro to its full potential.

If you’re in the target audience for Apple’s largest 12.9-inch iPad Pro, you probably don’t need us to tell you why you should consider it. However, for those on the fence, it’s worth pointing out that there’s more to this larger iPad Pro than just the bigger screen. © Provided by Digital Trends A woman sits at a table using a 12.9-inch iPad Pro.

With the latest 2021 iPad Pro lineup, Apple set the 12.9-inch model apart by incorporating a new Liquid Retina XDR display that supports high dynamic range (HDR) video content at peak brightness levels well above what any other iPad can deliver. This resulted from Apple’s shift to a mini-LED backlighting system that provides a contrast ratio to rival the best OLED screens.

Combined with the larger screen, this offers a great canvas for artists, photographers, and cinematographers to do their best work. However, it’s also an excellent choice for anybody who wants the largest screen possible, especially if you’re planning on using an iPad Pro as a laptop replacement — which is about where it fits in when you consider that it normally costs nearly as much as a MacBook Air.

With an 8.3-inch screen, Apple’s smallest iPad sits in a category of its own. If you’re seriously considering an iPad Mini, you’ve probably already ruled out Apple’s larger iPads. However, if you’re undecided and fear the smaller size means a less powerful tablet, you’ll be surprised to learn that the iPad Mini is nearly on par with Apple’s latest iPad Air. Besides the size, the processor is the only significant difference between the 2022 iPad Air and the 2021 iPad Mini. While Apple brought the iPad Air into its M1 family this year, the iPad Mini still uses the A15 chip. That’s the same chip used in the iPhone 13, so it’s plenty fast.

Beyond that, the specs are virtually identical in every way but the size — same screen quality, same camera systems on both the front and the back, same 5G connectivity, same USB-C connector, and the list goes on. The iPad Mini even has one thing its more expensive sibling lacks: a quad-LED flash for the rear camera.

This all comes in a package that’s both smaller and more affordable. The iPad Mini starts at a 64GB version, which may even be enough depending on how you plan to use it. It’s certainly plenty of space for reading books and taking notes, but if you plan to store a lot of photos or videos, you’ll want to opt for the 256GB upgrade.

How to control notification badges on your iPhone and iPad

How to Disable Rapid Security Response Software Updates on iPhone

Some iPhone Users Unable to Update Apps After Installing iOS 16

How to Disable Spotify Car Mode

New York Post Store Despite the hefty price tags, Apple has amassed a legion of devotees thanks to their lightweight, high-tech products. If you’ve yet to convert to the cult of Mac users, an Apple iPad Mini is one of those gadgets that can do the trick. It’s sleek, ...


View more: Act fast to save 60% on an iPad mini during the Refurbished Event


View more: Here's What Else to Expect From Apple Later This Year

How to Save Images from Safari to iPhone & iPad

Have you ever wondered how you can save pictures from webpages in Safari to your iPhone or iPad so they show up in the Photos app? It’s very easy, but that’s no consolation if you’re unfamiliar with how it works. Fortunately within a moment or two, you’ll have this ...


View more: How to Save Images from Safari to iPhone & iPad

Did you know you can quickly convert a webp image file to JPG, right from the Mac Finder? Thanks to Quick Actions, this is by far the simplest and fastest way to convert webp files to JPEG format on the Mac. Modern versions of MacOS system software support the ...


View more: Convert WEBP to JPG on Mac from Finder with a Quick Action

One out of four Apple iPhones might be made in India by 2025 according to J.P. Morgan analysts. Their estimates also suggest 25% of all Apple products will be built outside of China by 2025. As for the iPhone 14, Apple is expected to move 5% of the production ...


View more: Analyst predicts a quarter of iPhone production to move to India by 2025

If you just got a brand new iPhone 14 Pro, iPhone 14 Pro Max, iPhone 14, or iPhone 14 Plus, you’re probably pretty excited to get it setup and working, with all of your data and stuff from your prior iPhone onto the new device. Apple has made transferring ...

A YouTuber has quite literally crash-tested the iPhone 14’s Crash Detection feature and found Apple’s new emergency SOS function to reliably kick into action in the event of a controlled vehicle collision. Regular gadget-smasher TechRax today published a video in which his team can be seen remotely controlling a driverless ...

How to Downgrade iOS 16 and Revert to iOS 15

iPhone 14: How to Optimize Action Mode for Low-Light Shooting

How to Enable Haptic Feedback on iPhone Keyboard

How to Install iOS 16 on iPhone

iOS 16 Battery Life Draining Fast on iPhone? Here’s Why & How to Fix It

These iPads just got huge price cuts at Amazon

The newest iPad Air already has a discount at Amazon

Save nearly $400 off this refurbished iPad Air this month

Listen to Long Audio Messages Easier on iPhone with This Trick

How To Download a Virtual Private Network on Your iPhone, iPad

iOS 16: How to Translate Text in the Camera App

iOS 16: How to Lock Hidden and Recently Deleted Photo Albums

How to Quickly Set a Timer on Your iPhone

You Can Now Play the Classic Game 'Quake' on Apple Watch

Apple Online Store Down Ahead of iPhone 14, iPhone 14 Pro, and AirPods Pro 2 Pre-Orders

How to Unlock iPhone With Your Voice

Every product Apple skipped at its iPhone 14 event today

Apple Event: Four Announcements to Expect Today Beyond the iPhone 14

Hosts File Not Working on Mac? Try This Fix

How to Play iPhone & iPad Games on Mac

Apple's U.S. iPhone User Base Overtook Android in June Quarter, Now Accounts for More Than Half of All Smartphones

How to Hard Lock an iPhone to Prevent Unauthorized Biometric Access

Apple Has Made Major Updates to macOS Malware Protection in 2022

How to Search Messages on Mac

Don't Buy an Apple Watch Series 3 Right Now: It's About to Be Discontinued

Apple Might Have Discontinued the Last Apple Watch Edition