The slip fueled a discussion that Republicans would love to get more attention.

The TAKE with Rick Klein

It wasn't the story of the day or the week, and more pressing national matters surround it in every direction.

But the scene in the White House press briefing room on Wednesday spoke to a particular political vulnerability of President Joe Biden and his party — one discussed only around the edges in Democratic circles, but that Republicans would love to have get more attention.

A few hours earlier, the president seemed to wonder aloud why the late Rep. Jackie Walorski, R-Ind., wasn't at an event organized at the White House: “Jackie, are you here? Where's Jackie?”

White House press secretary Karine Jean-Pierre was asked about that by ABC News White House Correspondent Cecilia Vega — and, later on in the briefing, by a pile-on of other reporters seeking clarity on what the president meant.

Jean-Pierre's answers mentioned the bipartisan nature of the event, a plea for “context” around Biden listing contributors and Walorski being “top of mind,” the fact that the president will meet with her family on Friday and the importance of the conference's substance.

She didn't say Biden misspoke, and she downplayed it overall: “That is not an unusual scenario there.”

That might be part of the problem, though. Biden has called himself a “gaffe machine” and his verbal miscues long predate his time as president, but the accumulation of odd moments and statements forcing White House clean-up has made its way into mainstream discussions of the midterms and what comes next.

Asked recently on “60 Minutes” about his fitness for the job, Biden responded crisply: “Watch me.” With 56% of even Democrats wanting the party to look elsewhere in 2024, according to this week's ABC News/Washington Post poll, that also might be part of the problem right now. 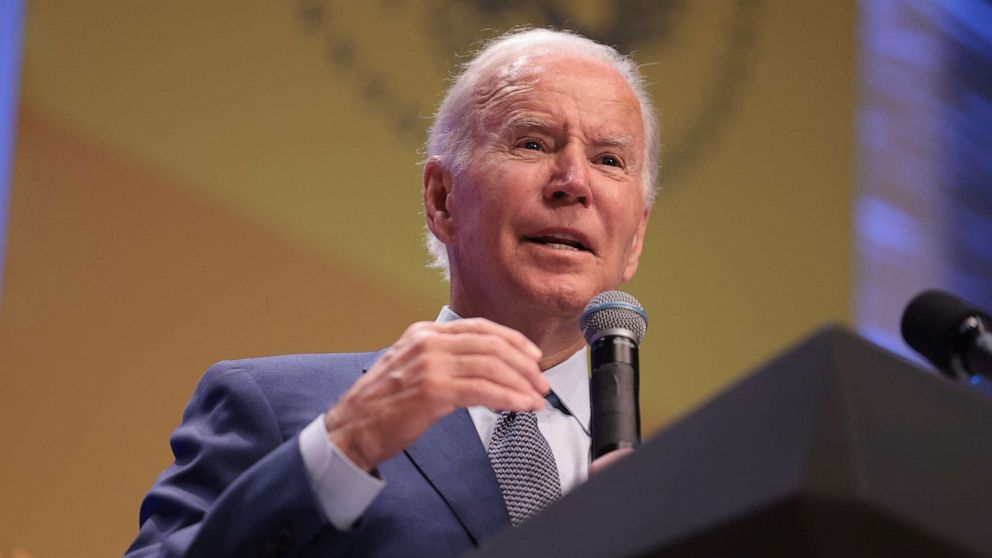 The RUNDOWN with Averi Harper

As Hurricane Ian batters Florida, Gov. Ron DeSantis' team is pushing back on the notion of the storm being a test of his ability to lead.

“No – it's a natural disaster; the governor is focused on saving lives,” tweeted Christina Pushaw, a spokeswoman for his reelection campaign. “Stop politicizing!”

Regardless of his campaign's outrage at the suggestion, DeSantis' response to the hurricane season will be fresh on the minds of voters come November. Yes, if things go wrong, the governor could take a hit. But stellar decision-making could also be a boon to his campaign in the closing stretch.

DeSantis isn't the only person on the ballot shying away from politics during the storm. The Democratic nominee for governor, former Rep. Charlie Crist, has suspended ads in markets expected to be severely impacted by Ian. When asked for his thoughts on DeSantis' handling of the storm, Crist stood down.

“I don't want to get into Monday-morning quarterbacking before Monday. I don't think it's appropriate,” Crist told reporters this week. He later added, “What we all need to do is be focused on protecting our fellow Floridians, doing whatever we can to maintain that safety.”

The White House, too, has refrained from speaking about the stark differences between DeSantis and President Biden. During a call between the two leaders on Tuesday night, there were “no politics” discussed, press secretary Karine Jean-Pierre later said.

“This is about two people who wanted to have a conversation on how we can be partners to the governor and his constituents,” she said. 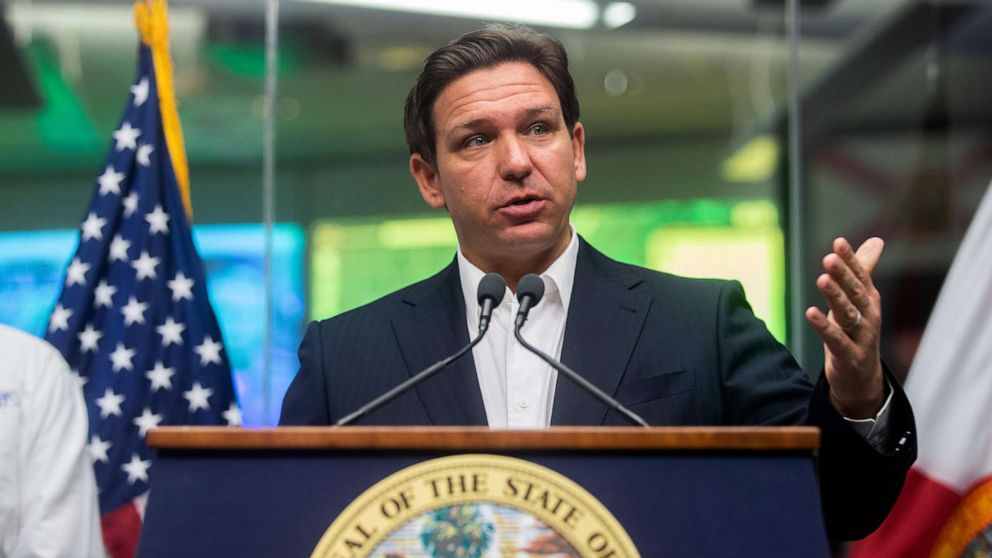 The TIP with Libby Cathey

Arizona Democratic attorney general nominee Kris Mayes and her Republican opponent, Abe Hamadeh, sparred on a debate stage in Phoenix on Wednesday, both agreeing that the differences between them — on abortion, on the validity of the 2020 election — were crystal-clear.

Mayes said, as attorney general, that she wouldn't prosecute any health care provider who violates a state abortion ban with no exceptions for rape and incest cases, deeming the law unconstitutional under Arizona's right to privacy. Hamadeh said he would follow the newly reinstated territorial-era abortion ban, calling his opponent's resistance “dangerous.”

“I think there's a clear difference,” Mayes said. “My opponent wants to put doctors and nurses and pharmacists in jail for abortion care, and that's outrageous.”

While calling it “an important distinction” between them, Hamadeh said: “There's an argument to be made on both sides, but I'm tasked to uphold the law.”

The pair also exchanged condescending blows about the other's background, with Mayes knocking Hamadeh's age — he's 31 — and Hamadeh attacking Mayes' lack of time at trial despite her background as a lawyer.

While candidates in state attorney general races are often lesser known than those at the top of the ticket, such races have drawn more attention in 2022 in large part due to Republican candidates clinging to the false belief that the 2020 election was rigged.

According to FiveThirtyEight, seven election deniers, including Hamadeh, are running across the U.S. for state attorney general with seven more running for secretary of state, the post that oversees election administration in most areas.

In response, the Democratic Association of Secretaries of State announced an $11 million ad buy this week in Michigan, Minnesota and Nevada — three battlegrounds with incumbent Democratic secretaries of state who are running against election-deniers. The group has also promised spending in Arizona and Georgia. 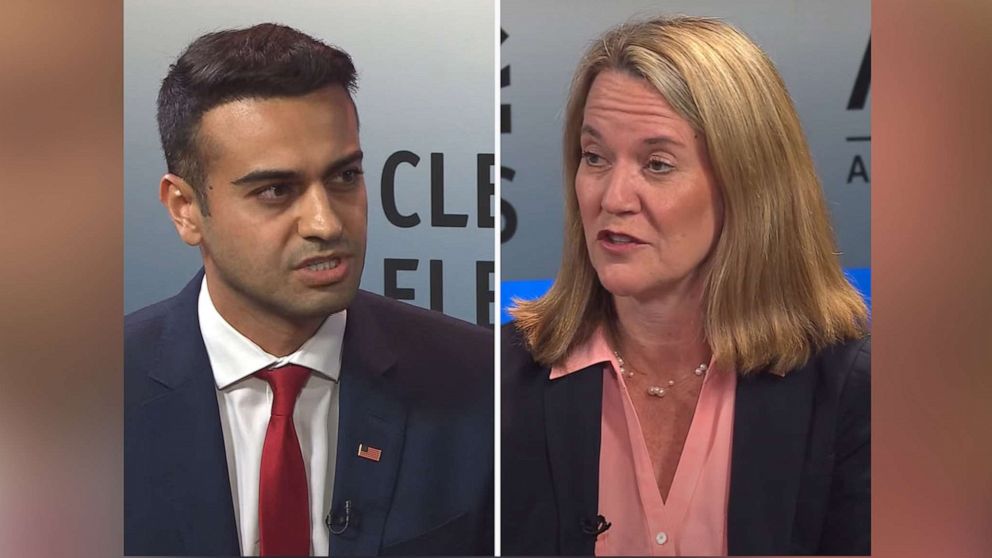 ABC News' “Start Here” Podcast. “Start Here” devotes all of Thursday's episode to Hurricane Ian. We start with an interview from Fort Myers, Florida, where resident Joe Orlandini's home has been in 12 feet of moving water — and rising; he's watching neighbors' homes float by. Then, ABC's Ginger Zee breaks down the storm's path of destruction and explains where these weather patterns are coming from. http://apple.co/2HPocUL

WHAT YOU NEED TO KNOW TODAY

Download the ABC News app and select “The Note” as an item of interest to receive the day's sharpest political analysis.

The Note is a daily ABC News feature that highlights the day's top stories in politics. Please check back Friday for the latest.

Saddle Road could become impassable due to lava over the next few days (Picture: AP) Towns in Hawaii could be cut off if lava from the Mauna Loa volcano spreads further. The eruption has brought a surprise tourism boom during a slow season for the city of Hilo. Hotels ...


View more: Towns could be 'cut off' as lava threatens to swallow up roads in Hawaii

The Pierce County Council wants to debate the future of Canyon Road. They're too late

Dec. 3—OPINION AND COMMENTARY — Editorials and other Opinion content offer perspectives on issues important to our community and are independent from the work of our newsroom reporters. The damage has been done. The monster has been created. That’s why it’s so maddening now — many years later — to ...


View more: The Pierce County Council wants to debate the future of Canyon Road. They're too late

Glock 17 Okay, I can hear the big collective groan and see the big collective facepalm from our readers already. “Jeez-Louise, Chris Orr is writing yet another article about Glock pistols?? What can he say about them now that he hasn’t said already?!?!” Yes, I’ve already written ad nauseum ...

Finally getting around to cleaning out the attic? Before you toss out Grandma’s collection of brass reindeer and plastic lawn Santas, make sure they’re not worth a fortune. These Christmas collectibles are worth a small fortune. Vintage Christmas decorations turn into valuable collectibles over time. If you have any of ...

Apple looks to move business to India or Vietnam

As Tuvalu succumbs to rising sea levels, the island nation wants to be the first virtual country

'I Am Not A Bank': King Charles Refused To Take Prince Harry's Calls Asking For Money Prior To Queen Elizabeth's Passing

Noodle, the famous 'bones or no bones' pug, has died

Cats Vs. Inanimate Objects: Tweets That Tell A Tale Of Rivalry As Old As Tom & Jerry

This Plant Keeps Rodents Out of Your Yard

Why the USMNT Couldn’t Go Any Further

Bellingham woman accused of endangering an infant in freezing temperatures

Did Warriors coach Steve Kerr tamper with Alex Caruso after win vs. Bulls?

Founder of Gardner Village dies, was “a total creative and total entrepreneur”

Trump Most Likely to Be Convicted in This Investigation, Kirschner Predicts

This Is The Sorriest, Smoked Corvette C7 Z06 You Will Ever See

Trump demands 'termination' of Constitution so he can return to power