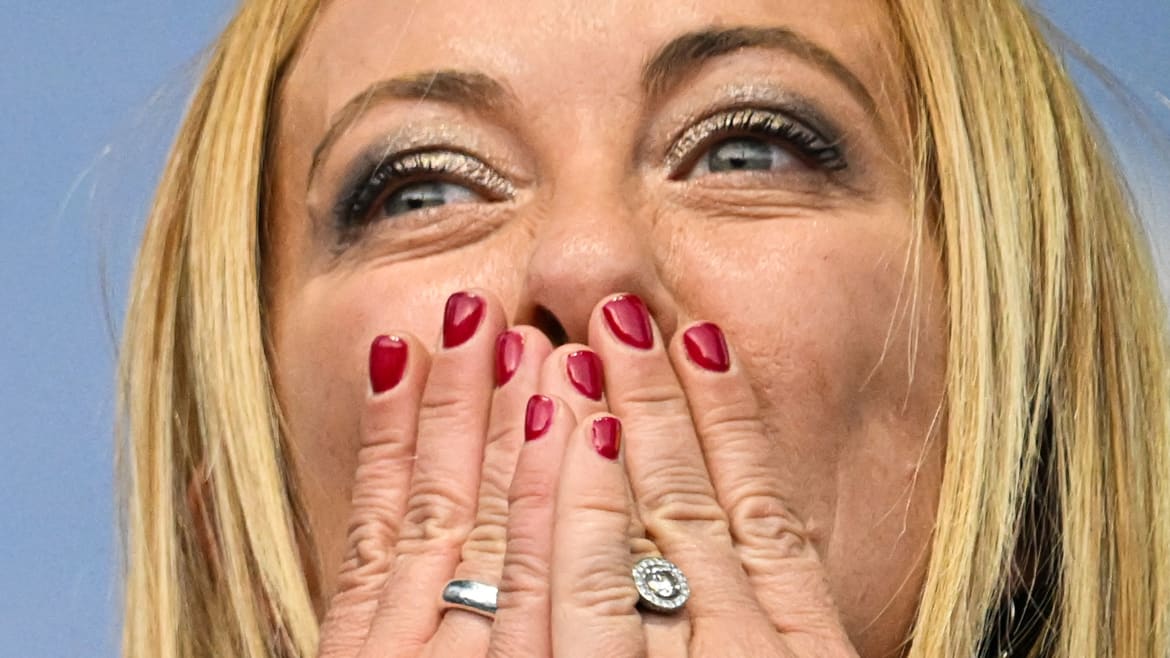 A snippet from a 2019 speech given by the incoming Italian Prime Minister Giorgia Meloni went viral on Twitter this week.

In case you missed it, Meloni (according to the translation) alleges that “everything that defines us is now an enemy.” She adds that “they” attack “national identity,” “religious identity,” “gender identity,” and “family identity.” (Sure sounds to me like that bête noire of the right, identity politics.)

Next, Meloni says that “they” want to turn her into a number, because “when I am a number, I no longer have any identity or roots.” This process, she says, is done to make her “the perfect slave at the mercy of financial speculators—the perfect consumer.”

I don’t pretend to be an expert on Italian politics, but I don’t have to be. There are common themes between this and what we are seeing on the nationalist right in the good old U.S.A. For that reason (among others), it shouldn’t be surprising that Meloni’s speech was widely praised by the American right.

“Do we have a single American politician capable of speaking words like that with such force, and such conviction?” asked conservative writer Rod Dreher. “I can’t think of one. Giorgia Meloni has more balls than a Congress full of Republicans.” 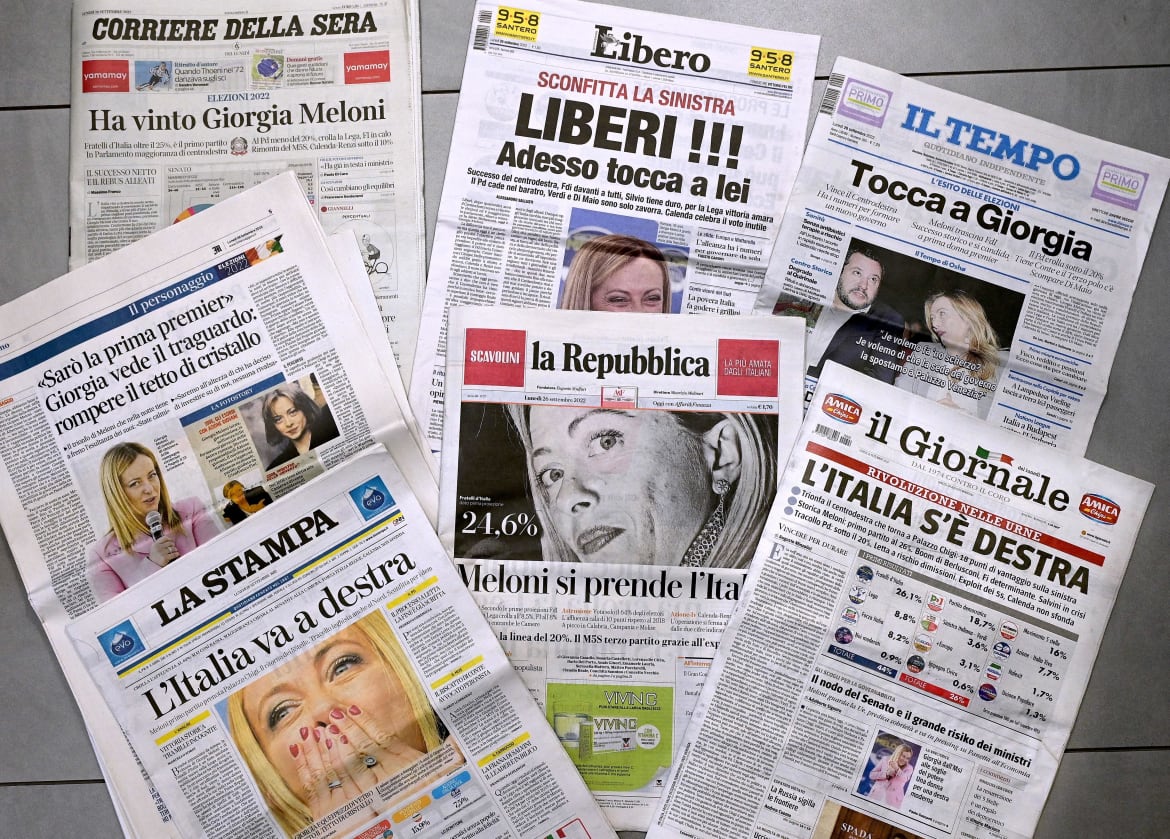 The front pages of Italian newspapers after Giorgia Meloni’s party came out on top in general elections. Vincenzo Pinto/AFP via Getty

This sort of praise has drawn a lot of controversy, but I think Meloni’s words provide some clues for those of us hoping to understand (and rebut) the radical right in America.

As Meloni’s speech makes clear, the right believes that traditional culture is under attack. And let’s be honest, it is.

The left has frequently been the aggressor in the culture wars. Let’s take gay marriage, for example. Although one of its early intellectual champions was the gay conservative writer Andrew Sullivan, and same sex marriage is currently popular even among Republicans, it was a shocking change for many religious Americans.

And since we’re talking about shocks to the political and social systems, it’s worth asking: Is it a complete coincidence that the timing of the Obergefell Supreme Court decision legalizing gay marriage and the rise of Donald Trump coincide precisely in the summer of 2015?

But if gay marriage didn’t radicalize some on the religious right, what do you think happened when the next frontier, trans rights, immediately became the cause du jour? Meloni’s comments about the assault on “gender identity” obviously fit within this rubric. And while people fighting for their civil rights reasonably don’t want to wait for society to catch up, a lot of the social mores surrounding gender and sexuality have whipsawed so fast—and the new rules have been enforced so furiously—that a lot of people have simply refused to “evolve on the issue.”

Next, Meloni talks about the loss of identity and “roots.” Again, intellectually honest Americans can identify with this concern. Do you think the left’s attempts to remove statues of Thomas Jefferson or rename schools named for Abraham Lincoln might be contributing—even just a little bit—to this backlash?

You might be thinking: “Why can’t these reactionaries get with the times? Don’t they want to live in a fun cosmopolitan world where anything goes? Things here are pretty good. We’ve got flat-screen TVs. You can let your freak flag fly and have fun.”

Yes, but while liberal modernity offers us significant peace and prosperity, it does not offer what many people crave: Purpose, meaning, tradition, and romance.

Consider this from George Orwell: “Whereas Socialism, and even capitalism in a more grudging way, have said to people ‘I offer you a good time,’ Hitler has said to them ‘I offer you struggle, danger and death,’ and as a result a whole nation flings itself at his feet.”

As a conservative who prizes individual rights and family values, I admit I was as blind as anyone to just how pervasive this hunger for meaning and purpose had become.

That’s probably because I already have it. I have a fulfilling job. I go to church every week. I have a wife and children. I have lunch with my mom once a week. I coached Little League. I’m not looking to the government for purpose or transcendent meaning. But here’s the thing: a surprising number of Americans are.

Of course, every radical cause needs a good bogeyman. So who’s to blame for the loss of purpose and meaning in modern life?

It’s worth noting that Orwell does not lament that liberal democracy doesn’t offer romantic struggle; he says that capitalism doesn’t. And this brings us to our next point: Meloni claims that being stripped of her identity makes her “the perfect slave at the mercy of financial speculators—the perfect consumer.”

This strikes me as a conspiracy theory (that borders on an antisemitic trope) and seems to blame corporations for the world’s problems—which was once out of bounds on the American right, but is now in very much in vogue with right populists like Gov. Ron DeSantis.

Those of us outside of the populist right tend to either fear or mock politicians like Meloni, but combating this right-wing nationalist sentiment requires studying why it is so darn appealing. And studying it means being open to the possibility that we are, in some ways, contributing to its rise.

When it comes to cancel culture, woke capitalism, tearing down statues of founding fathers, having yet another “conversation” about the Atlanta Braves changing their name, or insisting people use the “Ze” pronoun, progressives should probably pump the brakes—or at least choose their culture battles more judiciously.

Meanwhile, those of us who want to preserve the republic have to find a way to make liberal democracy seem cool, romantic, and revolutionary again.

Doing this will require a strong will and a sense of humility—and cultural patience—that I’m not sure exists in America these days. And that’s pretty much the problem.

Donald Trump and his son Donald Trump Jr. arrive for a news conference at Trump Tower in New York, as Allen Weisselberg, center, chief financial officer of The Trump, looks on Jan. 11, 2017. – TIMOTHY A. CLARY/AFP/AFP/TNS The Trump Org.’s own lawyers almost impeached their witness during the ...

Mike Fitzick working behind the counter at Bakeria 1010 with his wife, Maura, during the height of COVID-19 in 2020. Fourth-generation pizza-shop owner Salvatore Carollo is selling Spuntino, his Northern Liberties pizzeria, to Jersey Shore pizzaiolo Mike Fitzick, who owns Bakeria 1010 in Linwood, N.J. Carollo, who opened Spuntino ...


View more: Who is Niclas Fullkrug? Things to know about Germany's target man

Worried gum will stay in your stomach for years? Think you can get perfect vision if you eat enough carrots? We fact-checked five pieces of food folklore.