Colors are extremely important when it comes to deciding which fruits and vegetables to consumeEach is high in a separate compound, which gives it the unique color - which helps to boost healthNearly nine in ten American adults do not consume enough fruit and vegetables daily, experts say

You’d be forgiven for assuming the old saying ‘eat the rainbow’ was just another baseless piece of advice to encourage people to consume more fruit in veg.

But colors are extremely important when it comes to our health and whether it’s a bright red apple or a earthy green pear, the color of natural foods is a sign of the nutrients they contain.

Red apples, peppers and tomatoes are high in lycopene — which gives them their dark red color — helps protect against cancers and arthritis.

Blueberries, blackberries and eggplants are stuffed with anthocyanins, tannins and other compounds that previous research has suggested improve memory, while leafy greens and avocados contain plenty of nitrates that studies show lower the risk of heart disease.

Dr Evangeline Mantzioris, a nutritionists at the University of South Australia, says there are at least 5,000 nutrients in different fruits and vegetables. She recommends ensuring a multi-colored diet to ‘maximise health benefits’. 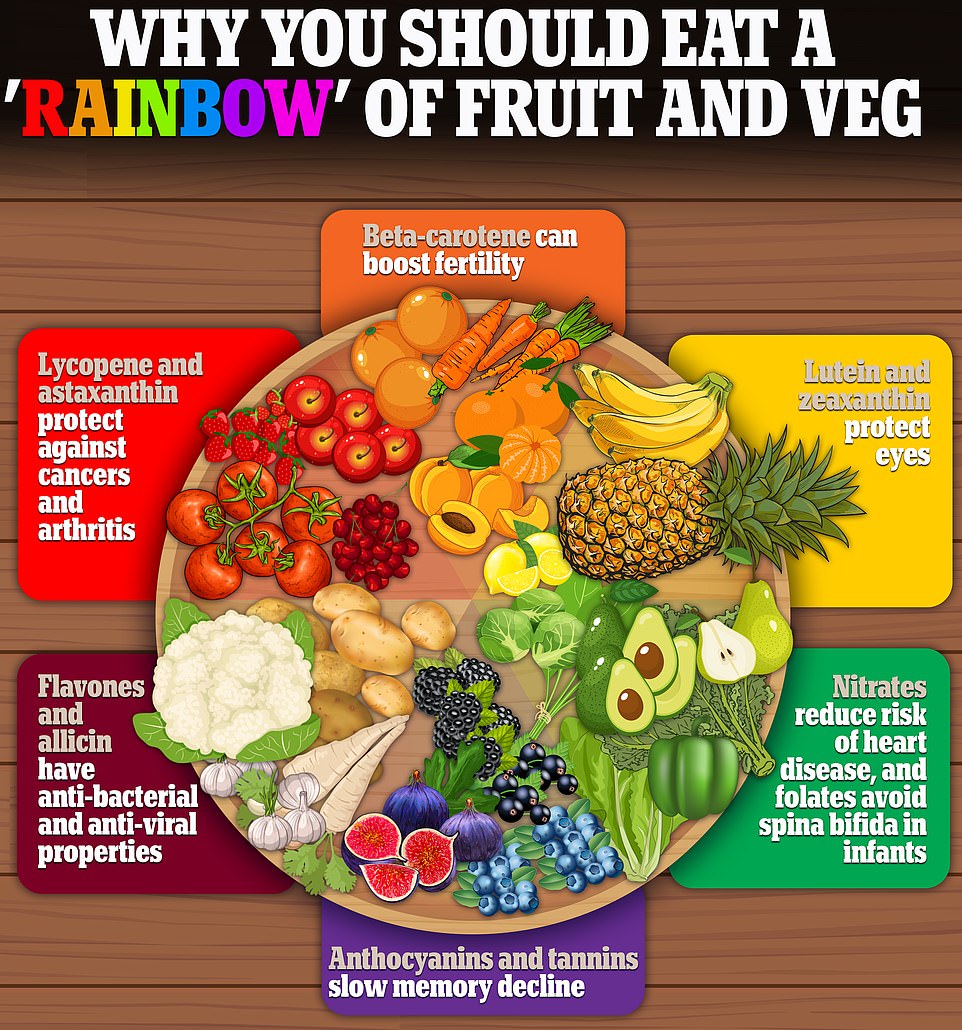 Guidelines say everyone should get at least five portions of fruits and vegetables a day, of varying colors to ensure the best nutrition benefits.

The Centers for Disease Control and Prevention (CDC) says 87 per cent of Americans are not getting enough fruit and vegetables every day in their diet.

RED: Protects against cancer and arthritis

They are top sources of carotenoids including astaxanthin and lycopene, which reduce the numbers of dangerous ‘free radicals’ in the body.

Free radicals are molecules produced in cells naturally through breathing and moving, but may also appear due to exposure to too much sunlight, smoking, air-pollution and industrial chemicals.

They can cause damage to the lining of cells, proteins and DNA raising the risk of a whole host of diseases including cancer and arthritis.

But anti-oxidants — such as lycopene — work by hoovering up these molecules shortly after they are made, reducing the risk of damage to cells.

A systematic review from 2020, found that the substance reduced the risk of prostate cancer by suppressing these mutations. Another review — also from 2020 — also found it could protect against other cancers including those of the breasts, lung and stomach.

Many small-scale studies have already linked eating strawberries with improved control of arthritis.

They include a 2017 paper which found that eating 50 grams of strawberries a day for 12 weeks reduced inflammation and symptoms of osteoarthritis in participants.

Carotenoids — such as beta-carotene and beta-cryptoxanthin — which give the fruits their color are antioxidants that when consumed are distributed in fat tissues throughout the body as well as the ovaries and testes.

They work by hoovering up free radicals in these areas, reducing the risk of serious disease and boosting the function of the organs.

A 2018 major study involving 70,000 women found those who ate more citrus fruit had a 22 per cent lower risk of endometriosis. This is a condition where growths form around the uterus, harming chances of conceiving.

A 2020 meta-analysis on 440,000 women also suggested a fertility benefit, concluding those who ate more orange fruits and vegetables were significantly less likely to get ovarian cancer than their counterparts.

Scientists also suggest the antioxidant can protect sperm, because these cells are exposed to free radicals during their creation and in the ejaculate. Little human research has been carried out in this area, but a small-scale 2005 study found consumption of antioxidants including carotene was association with improved semen quality.

Orange fruits and vegetables are also top sources of vitamin C, which is linked to improved absorption of heme iron to boost oxygen transport in the body and heart health.

Deficiencies can lead to scurvy — bleeding of the gums — as well as anemia, and trouble getting wounds to heal correctly.

Munching on half-a-cup of blue fruits — like blueberries, blackberries and eggplants — could protect the brain from decline, a growing list of studies suggests.

Two meta-analyses in 2019 and 2022 which each looked at about 12 papers pointed to the potential mental benefit of eating fruits of this color.

And many smaller studies have also pointed to the link, including a 2012 landmark Harvard University study suggesting blueberry consumption delayed brain aging by two-and-a-half years.

Scientists say eating blue and purple fruits and vegetables boosts blood flow to key areas of the brain, ensuring a good supply of nutrients and oxygen for cells.

Anthocyanins, tannins and other antioxidants in the plants have also been linked to reducing the number of ‘free radicals’ in the body — and cutting inflammation.

Pineapples, corn, lemons and even bananas can all help protect eyes from sun damage and vision loss.

They are excellent sources of lutein, zeaxanthin and other antioxidants which can occur in higher concentrations in the eye when the organ is exposed to too much sunlight.

If left unchecked, they may damage DNA and the lining of cells which may lead to a deterioration in vision.

But lutein and other compounds work to hoover these up, staving off the worst effects.

Macular degeneration affects one in 10 US adults, and tends to strike later in life with adults gradually losing the central area of their vision.

Meta-analyses from 2012 show how eating more yellow-colored fruits and vegetables significantly reduced the risk of developing this condition in participants.

Another major review of more than 20 studies from 2018 concluded that ‘many studies support lutein’s favorable effects on the eye’.

Avocadoes, broccoli, brussel sprouts, kale and other leafy greens can reduce the risk of heart disease, studies suggest — and cut the risk of spina bifida in developing infants.

They are a top source of nitrates, which are broken down when consumed to trigger the dilation of vessels — and a subsequent drop in blood pressure.

This cuts strain on the heart and reduces the risk of damage to blood vessels, in turn lowering the risk of heart disease.

A meta-analysis from 2016 found there was a 15.8 per cent lower risk of cardiovascular disease among those who ate leafy greens regularly.

Green fruit and vegetables are also a top source of vitamin K, which helps to stop calcification of major blood vessels — which raises blood pressure and leads to heart disease.

They are also sources of folate — the natural form of vitamin B9 — which is recommended for all pregnant women.

Numerous studies have shown that this lowers the risk of spina bifida in children, or when an infant is born with the spinal cord sticking out of their back — rather than enclosed by the spine.

Brown and white fruits and vegetables get their color from ‘flavones’ such as apigenin, luteolin, isoetin and others found in garlic, potatoes and cauliflower.

But they are also major sources of allicin, which studies suggest has anti-bacterial and anti-viral properties.

Very few clinical trials have been carried out to date in humans, but those in the lab showed it could kill off viruses and bacteria — which even led to suggestions last year it could be used against Covid.

At this point, however, it is still unclear whether the compounds have the same effect in humans.

There is also evidence that allicin helps to lower blood pressure by triggering a dilation in blood vessels, similar to as in other vegetables.