Mabel Essien says her husband, Michael Essien, met the suspect in high school and gave him a second chance when he was homeless. 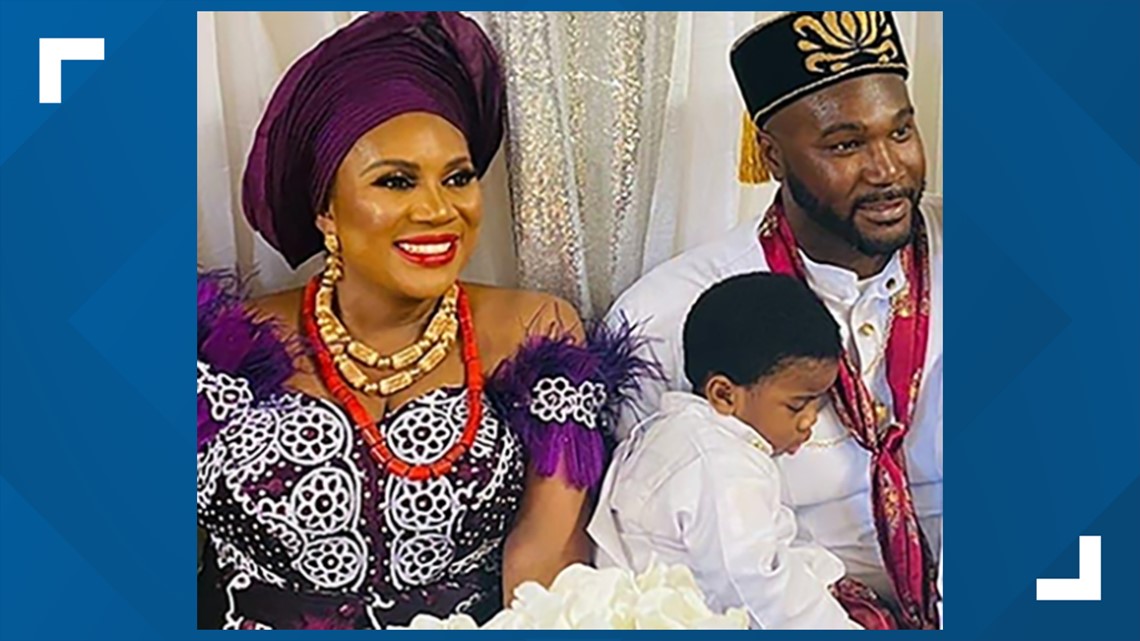 HOUSTON — It’s hard to imagine the pain of losing your husband and 2-year-old son, but that is Mabel Essien’s reality.

Her husband Michael Essien, 38, was shot and killed Tuesday afternoon in southwest Houston. Hours later her son, Micah, was found dead inside the family’s stolen SUV nearby.

Fadairo had told investigators Michael owed him money, but Mabel says it was her husband who was always helping him.

“When my husband met [Fadairo], we went to get our clothes from the cleaners, either get clothes or turn in clothes, and he saw someone sitting on the pavement like a bum on the road,” she said.

She said that was Fadairo. She says her husband recognized him from high school and gave him a second chance. Her husband was a security guard and got Fadairo a security job and often gave him cash, even letting him use his mailing address.

“He took him under his wings,” she told KHOU 11.  but said Fadairo’s behavior eventually made him worry. “I told him, this guy is going to make you loose your contract,” she said.

But Tuesday afternoon, police say after he killed Michael, he stole his SUV with his two-year-old child in the backseat and dumped the SUV nearby on Elm Street.

Home surveillance cameras show neighbors going about their day, not knowing a child was dying inside a hot car.

“That guy denied my kids the opportunity to know the great father that everybody had to know,” Mabel said.

Fadairo appeared in court and is charged with two counts of murder, along with tampering with evidence. Because of his criminal history, which goes back two decades, prosecutors asked for a high bond. It was granted at $1.5 million dollars.

Mabel said still can’t believe her husband and son are gone, but it’s their spirit she will always carry with her.

“I want the world to see other people in Michael’s eyes – that’s the only way my husband’s legacy can move forward,” she said.

More than anything, this mom is asking for prayers. She’s raising two other kids, the youngest just a few weeks old. To read more about how you can support the family, click here.

People cast their ballots at a polling station in Milan, Italy, on Sunday. Photo by Matteo Corner/EPA-EFE Sept. 25 (UPI) — A coalition of three right-wing parties are expected to claim victory under the leadership of Giorgia Meloni in Italy’s general election, exit polls Sunday indicate. The polls set ...

Hectic traveling is expected to carry over into the fall, and winter seasons, at least that’s the outlook from airlines and the tourism industry. The travel agency Hopper has analyzed data for airfare price predictions and saw strong booking demand for upcoming holiday travel after an “extraordinary” summer. Travel experts believe ...


View more: Tips On Saving Money On Flights Ahead Of Holiday Travel

Fiona damage is widespread in eastern Canada TORONTO — One day after post-tropical storm Fiona wrought havoc on eastern Canada, the full extent of the destruction is beginning to set in. The storm — one of the strongest ever to hit Canada — pummeled coastal towns on Saturday morning, ...

Bears risers and fallers after Week 3 win over Texans originally appeared on NBC Sports Chicago The Bears got an ugly win in Week 3 as they beat the Texans 23-20 at Soldier Field. Once again the passing attack look anemic, while the rushing attack carried the load on ...


View more: 'They decided the world is flat': Geraldo Rivera slams Ted Cruz and Josh Hawley over 'the Big Lie'

Oak Forest police on Sunday were on the scene at 167th and Cicero. OAK FOREST, IL — Heavy police presence was reported Sunday at an Oak Forest forest preserve, after a call came in reporting sounds of an infant crying from within the preserve. Oak Forest police and Cook ...

The 2022 World Cup in Qatar starts in under 60 days, and the USMNT only has one more fixture on the books (Tuesday, 2 pm ET vs. Saudi Arabia) before the tournament begins. In the penultimate tune-up match, Japan dominated the USMNT in such a way that it gave the ...


View more: Japan Just Showed the World How to Knock USMNT out of the 2022 World Cup

Favorite Benefits Of Working From Home Include Proximity To Pet, Office Outdoors: Poll

Opinion: Cody Gakpo Is A Player Chelsea Should Be Desperate To Sign

Roma, Paulo Dybala targets Inter: hopes of seeing him on the field again

Amazon overbuilt in the pandemic. Now it has to cut staff without sparking labor unrest

Amid historic drought, some turn to an ancient practice in their quest for water

Tucker Carlson wants to talk about my tattoos. So let's talk about them.

Bears' Justin Fields on Bad Game: ‘I Played Like Trash'

Report: Manchester City Could Be Favourites For Jude Bellingham Amid Chelsea Interest

25 Hysterical Teachers Who Tweeted The Hell Out Of Their Situations

‘Who puts a lock to keep people from getting out?’: New employee gets trapped in office bathroom that requires a key card to exit