Willow Smith: I love and accept my family for their humanness 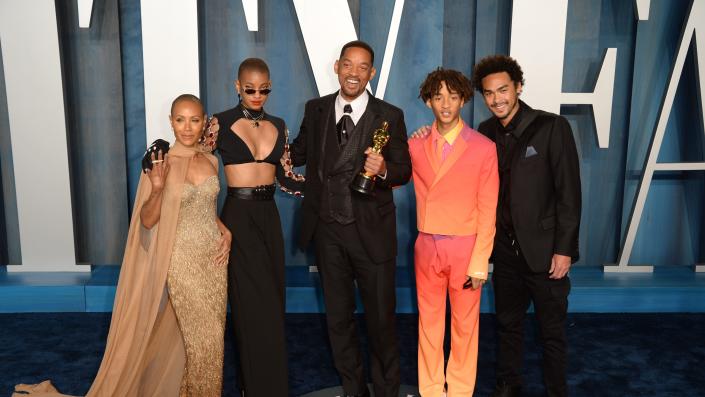 Willow Smith says she loves her family for “being human” but that because of their high-profile status in the media their fallibility “sometimes isn’t accepted”.

The musician said that the now infamous incident at this year’s Oscars ceremony – in which her father Will Smith slapped comedian Chris Rock onstage – has not derailed her own creativity.

It comes shortly after Smith apologised again to Rock in his first public statement in three months.

In a five-minute video posted on Instagram, the actor answered a series of questions from social media about the incident on March 27, during which he took to the stage following a joke Rock made about Jada Pinkett Smith’s alopecia.

Willow touched on the issue during an interview with US media outlet Billboard about her upcoming album Coping Mechanism.

“I see my whole family as being human, and I love and accept them for all their humanness,” she said.

She added that the media fallout following the Oscars incident did not “rock me as much as my own internal demons”.

Her father was banned from all Academy events or programmes for 10 years following his “unprecedented” behaviour.

Two days on from the incident, he issued a public apology to Rock and the Oscars production team, saying he reacted “emotionally” to the joke and that “violence in all its forms is poisonous and destructive”.

Pinkett Smith also called for a “season of healing” on her own social media post.

From Kareena Kapoor Khan to R. Madhavan, this is how actors have reacted to boycotting of Bollywood

When does House of the Dragon come out on NOW TV?

She-Hulk: Tatiana Maslany explains why she lied about Marvel casting

Aamir Khan on his character in Laal Singh Chaddha: None of us questioned why he is a Sikh

Koffee with Karan: Kiara Advani reveals Sidharth Malhotra is 'more than a friend'

Designer Hanae Mori passes away at 96

Hanae Mori Designer Hanae Mori, known for her elegant signature butterfly motifs, numerous cinema fashions and the wedding gown of Japan’s empress, has died, her office said Thursday. She was 96. Mori symbolized the rise of Japan as a modern, fashionable nation and the rise of the working woman. ...

Vijay Varma on Working with Alia Bhatt in Darlings: She is one of the finest switch on switch off actor I have ever seen

Vijay Varma, an Indian actor, started his career as a theatre artist and did numerous plays. He got his first break in the short film ‘Shor.’ He is a film fanatic and watches at least one film everyday. He worked with Alia Bhatt, Shefali Sharma and Vijay Maurya and ...


View more: Vijay Varma on Working with Alia Bhatt in Darlings: She is one of the finest switch on switch off actor I have ever seen

The Lord of The Rings is now under new management (Picture: Pierre Vinet/New Line/Saul Zaentz/Wing Nut/Kobal/REX/Shutterstock) The same company that bought Tomb Raider and Crystal Dynamics now owns Lord of the Rings, Limited Run Games, and Tripwire Interactive. There’s been a lot of, understandable, concern from fans about Microsoft ...


View more: Lord of the Rings licence bought by Embracer Group instead of Amazon

Amol will be taking over from Jeremy Paxman (Picture: BBC / REX) The BBC’s current media editor Amol Rajan will take over as the University Challenge quizmaster from Jeremy Paxman in 2023. Jeremy, 72, confirmed he would be stepping down from the role earlier this week after nearly three ...

The six-episode series is set inside the halls of government and interwoven with stories from around the country.

Academy Award and BAFTA-winner Kenneth Branagh stars in the new Sky Original This England chronicling the rise and fall of Boris Johnson.

Lauren Goodger picks up baby Lorena’s ashes after newborn’s death: ‘She’s at home with us’

What time is She-Hulk on Disney Plus?

Anne Heche's cause of death revealed: 'Inhalation and thermal injuries'

It’s that time of year: Jeremy Clarkson blesses us with yet another A-levels inspirational message of wonder on results day

‘You can’t act!’ 26 movie co-stars who disliked each other in real life

James Bye: Who is the Strictly Come Dancing 2022 contestant and what is he famous for?

Kid Cudi reveals he suffered a stroke in rehab in 2016: ‘Everything was f***ed’

How Shah Rukh Khan's family is the illustration of a secular India!

Look Both Ways is slight, simple and surprisingly perceptive

Raised by Wolves review: Richly imagined sci-fi allegory about parenting in the time of war and dogmatism

‘We were not willing to be silenced’: Cosey Fanni Tutti on the unsung heroine of electronic music

Drashti Dhami on Duranga: There were times I would be lost in my scenes and Gulshan would help me

Opinion | Why Arjun Kapoor, of all people, should stay silent on #BoycottBollywood debate

Vijay Deverakonda: 'Liger has been the hardest & most challenging film for me physically, mentally & performance wise'

Janmashtami 2022: Bollywood dahi handi songs to add to your playlist

The 10 biggest Netflix movies in the world this week

Only Murders In The Building fans rocked by bombshell twist ahead of season 2 finale: ‘This show never fails to amaze me’

We know exactly where She-Hulk fits on the MCU timeline

Can House of the Dragon save the Game of Thrones franchise?