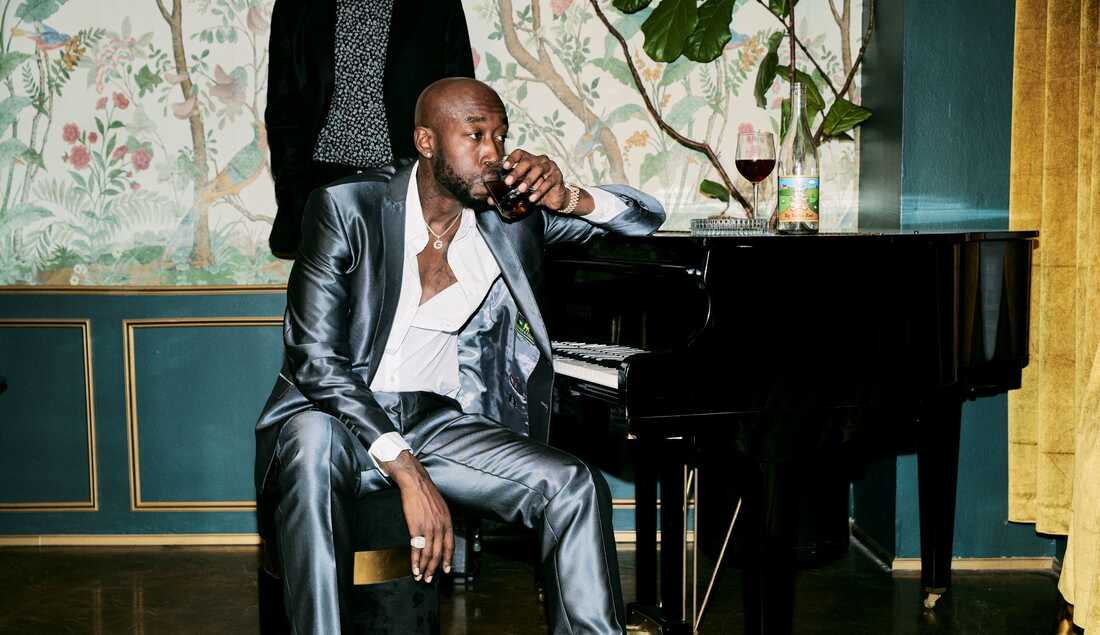 Gibbs is so skilled in the booth you have to meet him halfway to extract the penitence and sorrow in the marrow of some of these songs. Nick Walker hide caption

The new Freddie Gibbs album, $oul $old $eparately, arrives with the prestige and buzz of an artist’s Big Moment. Only Gibbs has cycled through a handful of these moments already — and delivered with aplomb. Now 40, he’s dispatched an emotionally nuanced record, one that’s neither a self-indulgent victory lap, a re-telling of the origin story for newcomers or a bespoke project laced with beats from a hypebeast icon. Titled after a snatch of a line from “Education,” a key track from 2019’s Bandana (“Drugs for free / Soul sold separately”), Gibbs is an amalgamation of every facet of his artistry on this record: the hustler, the dealer, the street veteran, the effortlessly gifted MC, the audio tour guide through a beatmaker’s fanciful compositions. It’s a rewarding listen from an artist still in his prime that leaves questions about what might come next.

Forget what F. Scott Fitzgerald said about American lives and second acts, Gibbs is on his third or fourth by any account. What to make of the pride of Gary, Indiana, signed to Interscope in 2006 then unceremoniously dropped without releasing an album, who latched onto Young Jeezy’s CTE World label a few years later before acrimoniously departing to start his own imprint in 2013. Along the way he tore through a hot streak of undeniable street-rap mixtapes from 2009’s The Miseducation of Freddie Gibbs until 2012’s Baby Face Killa. But with 2014’s collaborative album with Oxnard producer Madlib, Pinata, listeners heard Gibbs reborn: a real-deal gangster rapper who could sail on top of a beloved sampler’s frayed analog beats to universal acclaim.

Gibbs now seems to be opening yet another act. After managing to reinvent himself for a few key quadrants — from the kind of guy who treats r/hiphopheads as gospel, to a sophisticated listener lured by the magnetism of tightly looped beats from revered indie beatmakers, to the longtime devotee who fell in love with the verisimilitude of his older material but finds this sustained career arc nice — his portfolio is the stuff of indie-rap fantasy. Pinata signaled a shift in focus on the trajectory of Gibbs’ career: in 2018, he released Fetti, a collaborative EP with New Orleans rapper Curren$y helmed entirely by blunted bicoastal producer the Alchemist, before a reunion with Madlib on Bandana, an equally celebrated full-length of impeccable rapping amid perfectly complementary and just-outre-enough production. 2020 saw Alfredo, a full-length solo project entirely produced by the Alchemist that nabbed him a Grammy nomination, cap Gibbs’ six-year run as a one-man auteur who could rap over anything and whose new releases were immersions into lush hip-hop panoramas. In this stretch of his career, Gibbs has clearly found a few muses without sacrificing an ounce of credibility. These singular albums are all profoundly satisfying and not the one-dimensional output of a dilettante.

$oul $old $eparately lacks the lyrical and thematic cohesion to truly be a statement or legacy-defining masterwork above the rest of his distinguished catalog, and it sometimes labors under the weight of a forced progression. The album’s loose conceptual framework — Gibbs is staying at a luxury Las Vegas hotel, ignoring famous friends to hole up and finish the record — hints at a level of paranoia and trauma that is not examined as thoroughly as possible. (Refer back to moments like, “The revolution is the genocide / My execution might be televised,” from Alfredo for more pathos.) After the sole Alchemist collab on the album, the ferocious “Blackest in the Room,” where Gibbs depicts a barrage of vivid scenes that set the table for an album of fiery reflection (“My cousin live in Flint, she been sick since they fucked the water up”), the album sputters a bit in trying to find a balance between a blockbuster record and Gibbs’ natural tendency toward dense and unyielding raps. Lead single “Too Much” is a fine crossover attempt but Moneybagg Yo steals the show with his nonchalant bluster and charismatic flexes; there’s an anonymous Offset verse on the bland “Pain and Strife” on the way there. Gibbs acquits himself nicely on “Lobster Omelette,” but Rick Ross shows up, uncharacteristically languid, failing to live up to the delirious luxury-rap promise of the title or capture the magic of previous collabs like Alfredo’s “Scottie Beam” or loosie “Ice Cream” from earlier in the year.

But even at his most compliant, Gibbs can never stray too far from the craftsman-like approach he brings to his music. “Space Rabbit” boasts an opulent Boi-1da beat and Gibbs is locked in, offering surgical bars that find him navigating between the rapid-fire realities of dealing and soul-searching: “Sunday night through Thursday, you hit me, I’ll get you situated / Wonder if I’m going to Hell or my soul obliterated / Neighbor kids just hit me, they mama just sold the ‘fridgerator.” On “Rabbit Vision,” he soberly addresses his past beef with former mentor Jeezy. Both of these songs center his Rabbit persona, evoking his Vice Lord gang affiliation. It’s these meticulous details and personal flourishes that separate Gibbs’ deft pen from the movie-villain flows of peer Pusha T. Gibbs is never sentimental, his verses point toward a moral reckoning but don’t make obvious the inward conflict – he’s so skilled in the booth you have to meet him halfway to extract the penitence and sorrow in the marrow of some of these songs.

His willingness to bend at all accounts for the minute shifts in tone and perspective on the album. “Grandma’s Stove” finds Gibbs contemplating the fallout of a flourishing rap career. A diaristic journey into his come-up, growing celebrity stature and deep-seated fears, he raps, “I bought a house in Cali, I made it out for real / Pop Smoke killed in the hills, that shit gave me the chills,” accounting for his “lane out of Gary” to the growing existential danger of being a rapper anywhere. The comedown is the only track sporting a Madlib beat, the penultimate “CIA,” which finds the man affectionately nicknamed “Gangsta Gibbs” showing his cards (“I did this album off pages ripped out my diary”), peering beneath the perception of pivotal scenes in his story. He’s often made thoughts like this sound exuberant and blistering, but here he seems resigned and wistful. Sometimes you wish for the levity, or at least the bounce, of non-album singles like “Gang Signs” with SchoolBoy Q or “Black Illuminati” with Jadakiss, but the sincerity can be bracing, sidestepping Real Hip-Hop fetishism and instead conceding that the long road to success is littered with familiar potholes that make the tenure of an esteemed rapper tenuous.

After the breakthrough of Pinata, Gibbs retreated to the murky, features-addled waters of Shadow of a Doubt in 2015, the type of album he abandoned until this one. But even the deviations in his discography are never all that experimental. At their most probative, his records find new ways to measure features of his personality. Here, Gibbs delivers a great album that excels when he brings the listener into his headspace, even if it doesn’t uncover memoir-tier revelations. There’s a through-line of old-head references — memorable appearances by Kelly Price and Musiq Soulchild, interpolations of Maxwell and Bone Thugs hooks, a prominent sample of “Sippin’ on Some Syrup,” solid features from Raekwon and Scarface — that seem to long for an era where a journeyman rapper could become a star almost by accident. But that feels a bit like wish-fulfillment for a rapper who has spent his career ignoring the zeitgeist.

The well-worn mythology of the reformed gangster is not new, but Freddie Gibbs has become the most notable artist embodying a more refined, less late-capitalist mogul vision of growing older in hip-hop, one he will likely never fully abandon. If $oul $old $eparately wants for anything, it’s the cold-blooded precision of Roc Marciano and Alchemist’s collaborative album The Elephant Man’s Bones or the moral wrestling of billy woods’ Aethiopes, both from earlier this year. Gibbs continues to clear his own trail and now he’s simply allowed to be himself, armed with the confidence of an artist that’s lived a hundred lives toward self-actualization. $oul $old $eparately may not be a slam-dunk thesis statement, the unassailable capper on a storied arc, but it does fit with Gibbs’ other stabs at rap immortality; he knows that after you’ve put in the work, legends never die, and Gibbs, the eternal technician, never stops working.