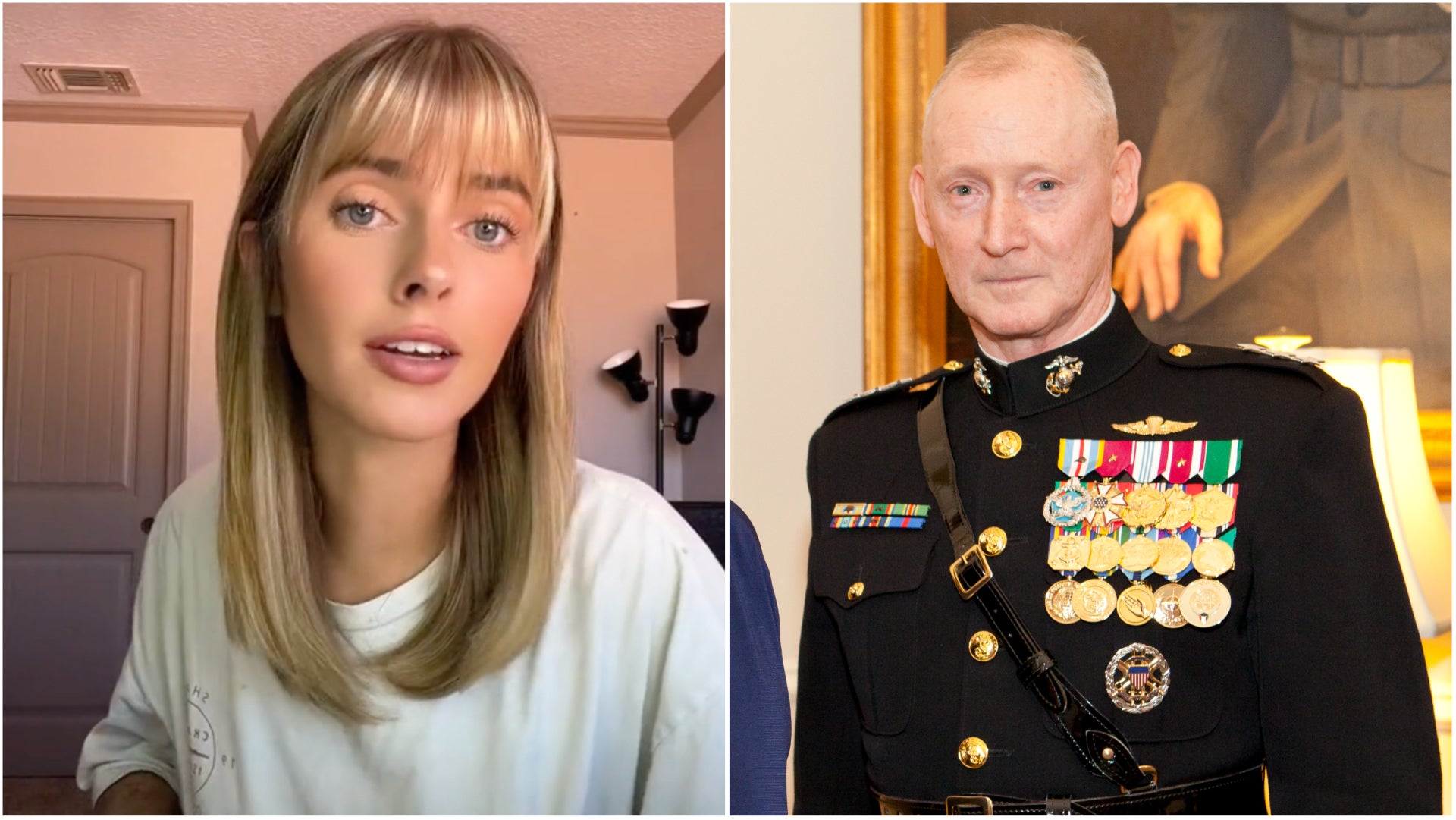 “I’m going to tell you about a time a retired U.S. Marine lieutenant general saved my life and probably has no recollection of who I am” is not a sentence you typically hear on TikTok.

It’s the beginning of a recent video posted by Emily Zeck, @thatpineapplegirl on the social media app, which has now been viewed hundreds of thousands of times by her more than two million followers.

Sitting in front of the camera and holding various makeup items as she speaks, Zeck — whose Linktree describes her as a “country music artist” and “swimwear brand owner” — tells the story of a professor she had in college who changed the course of her life. 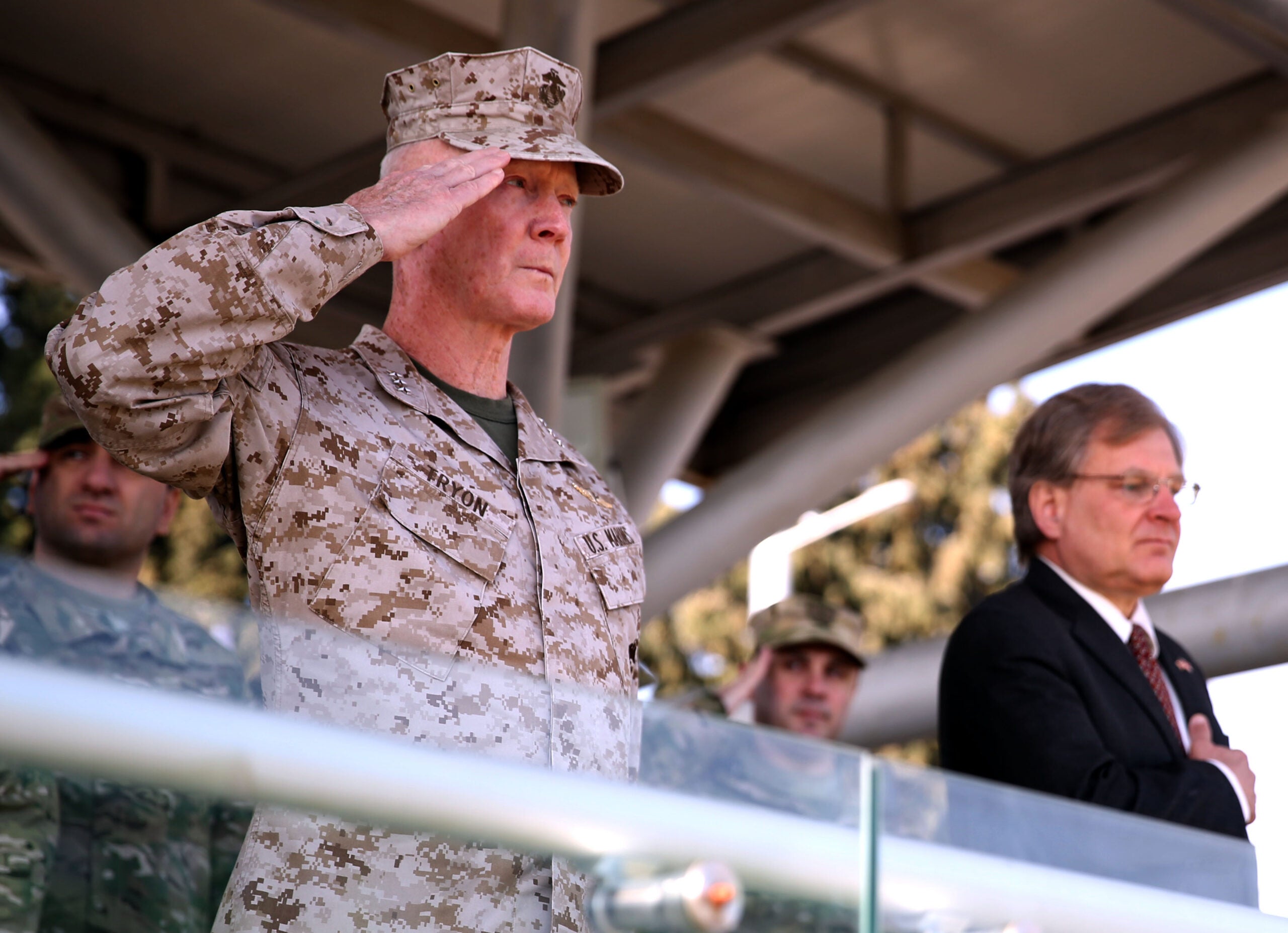 It was the fall semester of 2015, and Zeck was a sophomore, struggling in an abusive relationship; she wasn’t eating, had cut off “almost all my friends,” and was “about to fail out of college,” she says in the video. So she was looking for an easy class to pass and found one called Introduction to Leadership.

Zeck’s instructor was retired Marine Lt. Gen. Richard Tryon, who she said came to class every day looking “the exact same, in a perfectly pressed suit, shined shoes, slicked back hair, not a single strand out of place, and a briefcase.”

Those qualities aren’t all that surprising after learning about Tryon’s background. The retired Marine general told Task & Purpose in a phone call on Friday that he grew up in an Army family; his father was a “career soldier,” he said. Tryon enlisted in the Navy out of high school and right out of boot camp he ended up at the Naval Academy Preparatory School. During those first months of service, he met Marines and often saw them as “very positive, very strong role models,” he said, and he was thrilled to commission into the Marine Corps as an infantry officer. 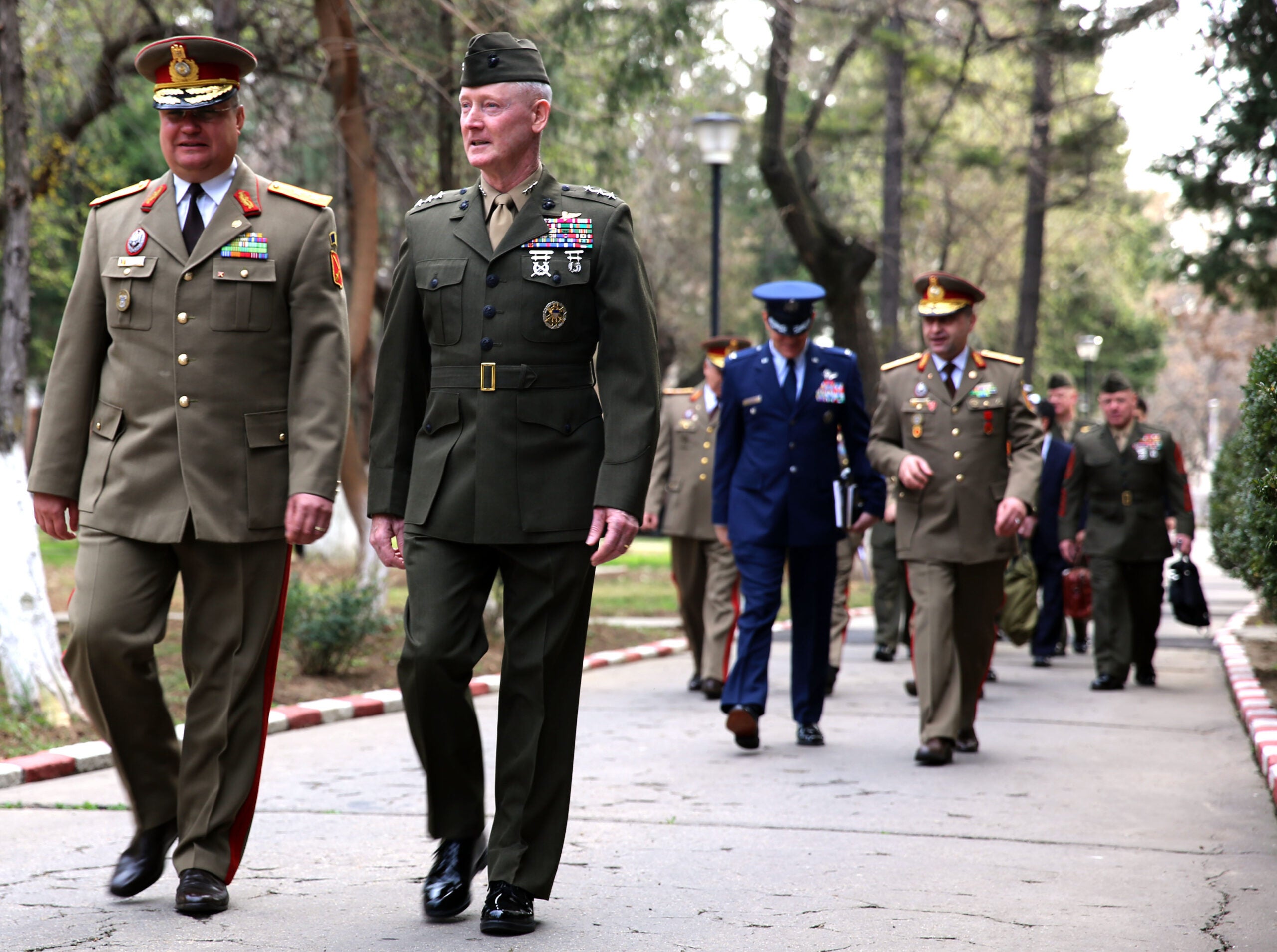 “It was just a terrific experience,” Tryon said. “I’m an infantry officer, did a couple of secondaries and whatnot, I spent time in special ops, but basically I’m a Marine infantry officer.”

Subscribe to Task & Purpose Today. Get the latest military news, entertainment, and gear in your inbox daily.

His official biography says he commanded “at every level in the Marine Corps” throughout his 44-year career, including a Marine Expeditionary Unit in Kosovo, the Marine Barracks in Washington, D.C., during the terror attacks of Sept. 11, 2001, and Marine Corps Recruiting Command. He also spent time in special operations and has deployed multiple times. 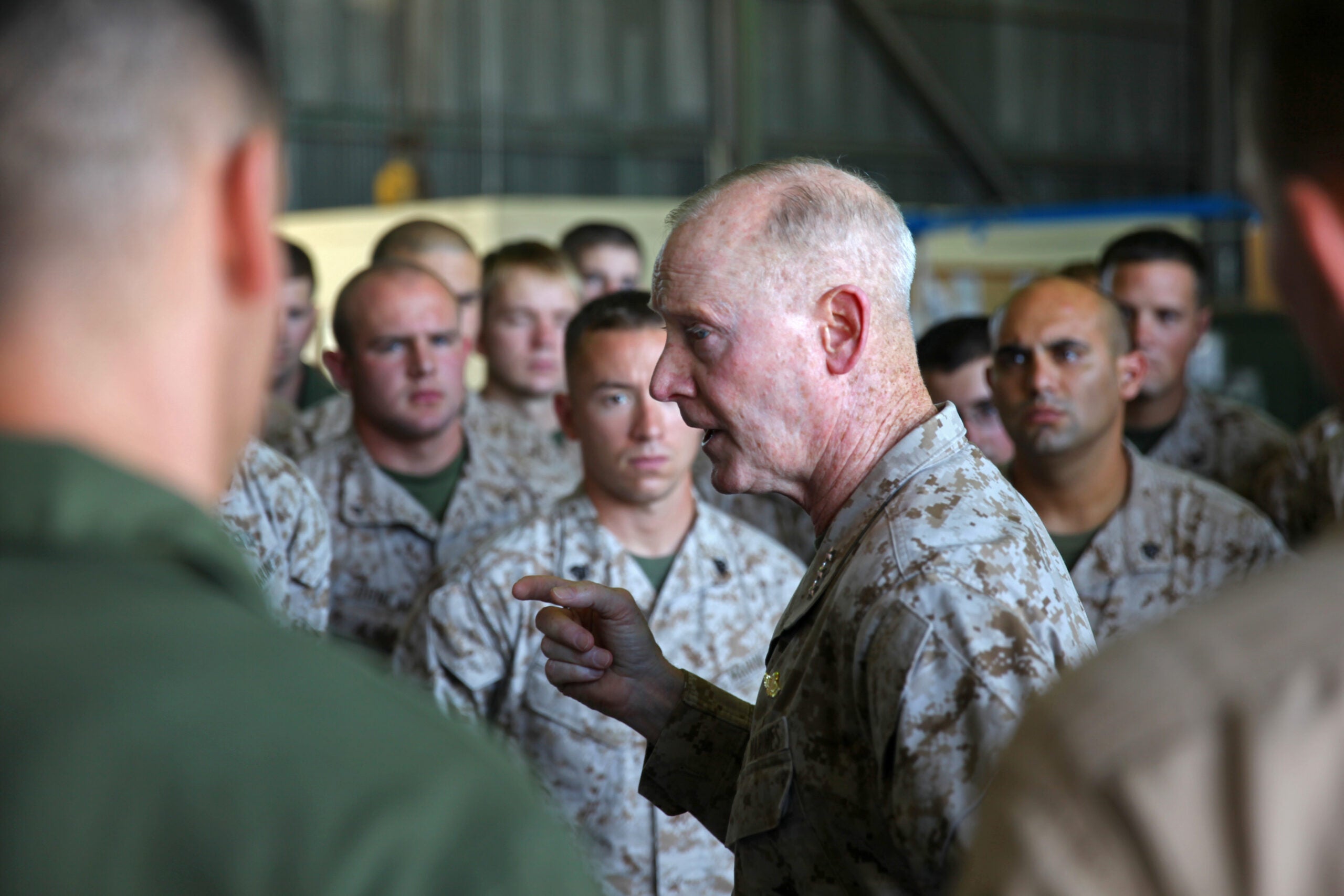 Before he ever stepped foot in a classroom teaching leadership to college students, Tryon said he honed what he believed to be critical components of leadership as a Marine. He had great leaders, he said, and he developed a leadership philosophy for himself that centered around forming relationships with his subordinates.

“I wanted to engage with them and teach, train, mentor, and lead, which was kind of my mantra,” Tryon said. “Help Marines, sailors, and civilian Marines to achieve not only the organization’s goals but their own goals, their own personal goals along the way. Help them understand that the two were not mutually exclusive and in fact many times that they were very similar in terms of direction.”

That philosophy is what he brought to the University of North Florida when he started his first class in the fall semester of 2015. Granted, there are differences between teaching Marines and teaching college students — ”In the Marine Corps, I was pretty sure I was going to get 100% of folks showing up, you don’t always get 100% showing up … in college,” Tryon laughed — but the fundamentals of leadership that he taught were still the same.

“You have to establish a relationship with the people you’re leading, or the people you’re associating with,” Tryon said. “And that relationship, if it’s done well and properly, will evolve into trust. And if your subordinates, if your followers have confidence in you as a leader and they trust you, they will do incredible things in support of whatever the mission mandate happens to be.”

Zeck was in his very first class, Tryon said. And it was the end of the semester when Zeck recalls in her video that Tryon went around the room and asked students to say something they were looking forward to. Zeck said she didn’t have much in mind, given the abuse and lost relationships with family and friends that she was dealing with. But, she did have her first-ever record label meeting coming up, so she told Tryon about that.

When class was over, Zeck said Tryon pulled her aside and asked if she wanted to “come in the next day to do a mock interview.”

“I said yes because I didn’t want to be rude,” Zeck says in her video. “But I went home and I was like what does this man know about the music industry? He’s a good 40 years older than I am, he served in the Marines for almost five decades, and the only thing he has to know about music is probably what he hears on the radio.”

Tryon laughed on Friday, saying she was right and he probably doesn’t “know a great deal about music.” But what Zeck found the next day wasn’t at all what she expected.

“I showed up the next day fully prepared to have my time wasted. He takes out his briefcase, and in his briefcase is a packet of research that he did on the music industry,” Zeck recalled. “And he flips through it and there’s highlighted sections with little notes in the margin about what questions he wants to ask me. And at that moment it hit me: It didn’t matter if he knew a single thing about the music industry. It didn’t matter if he asked me what my favorite color was. What mattered is he showed up. He showed up for me when nobody else was showing up for me.”

Tryon said that admittedly, he didn’t remember everything about that specific exchange — not only because it was several years ago, but because he tries to help all of his students in that way. He believes a big part of leadership is engaging with students outside the classroom to help them achieve their goals, and he often invites students to come by his office for mock interviews. But he said he thinks it “speaks volumes” to Zeck’s “intellect or moxie” that she had that take-away from their meeting.

As Zeck says in a follow-up TikTok, after making her original video she found Tryon and reached out to him directly to thank him for what he did for her all those years ago — and how his leadership has “impacted a few hundred thousand people” online.

Tryon joked that as you might imagine, he isn’t on TikTok, but Zeck’s email “brought a smile to my face of course, that I had impacted somebody in a way that positively influenced their approach to life.” He’s since listened to some of her music, which he loved — ”She’s very talented,” he said — and is planning on meeting her for lunch next week and doing a joint interview with the school newspaper.

What Zeck took away from their meeting is ultimately what Tryon hopes all of his students take away from his class: it’s critical for leaders to be connected with their subordinates, because “we’re all in this together.”

“I get a lot of students who circle back later, some during class and some after the class, and talk about the experience they’ve had with leadership … The idea of personal responsibility and accountability, knowing thyself — Socrates, not to get too academic here — but self-awareness. They have to know who they are before they can stand up and lead anybody.”

The latest on Task & Purpose ‘Untethered’ Air Force general: ‘When you kill your enemy, every part of your life is better’The Air Force’s top recruiter is personally reviewing recruits’ hand tattoos so they can enlistPolitical candidate accused of stolen valor claims his deployments are ‘classified’Tank warfare is still relevant, even if the Russians suck at itThe best military field gear we’ve ever bought

Want to write for Task & Purpose? Click here. Or check out the latest stories on our homepage.

Republican U.S. Senate candidate Herschel Walker might want to rethink his challenge to debate Harvard-educated MSNBC host Joy-Ann Reid, no matter how entertaining that’d be for the rest of us to watch. If you were in a food coma over the weekend you might have missed the fact that ...

Why No One Bought The 2006 Pontiac GTO “The Humbler” has to be one of the greatest nicknames for any muscle car ever. It’s only fitting that it was given to the car that pioneered the genre that we know and love – the Pontiac GTO. From its introduction ...


View more: Why No One Bought The 2006 Pontiac GTO

The candidates will likely have to endure petition challenges, meaning the February ballot isn't officially set just yet

It’s that time again! “Mad Money” host Jim Cramer rings the lightning round bell, which means he’s giving his answers to callers’ stock questions at rapid speed. Rio Tinto PLC: “You need to see commodity inflation come back. I will say, it’s a great hedge against long-term inflation, though.” ...


View more: Cramer's Lightning Round: Enphase Energy Is a Buy

Tom Dee of Hamburg, N.Y., digs out on Nov. 18. More than 6 feet of snow was dumped on Buffalo and surrounding suburbs that weekend. (John Normile/Getty Images) Regarded by millions of Americans as their favorite season, autumn for many regions of the United States has traditionally been marked ...

Guardians of the Galaxy Special: James Gunn on How Nebula Got Bucky's Arm

Trump Complains Judges He Appointed Won’t Give Him Special Treatment: ‘As Soon as They Get Appointed, They Go ROGUE!’

Mary Pat Christie takes on a new role at her N.J. alma mater

Pep: If I thought I was essential, I’d come back to Barca

Terrell Owens decks heckler at CVS, and here’s video to prove it

In Battle of Aging Forwards, Portugal Proves to Be a Little Out Ahead

Lane closures begin on I-75 for continued resurfacing project

About 200 people rescued from ice chunk on Minnesota lake