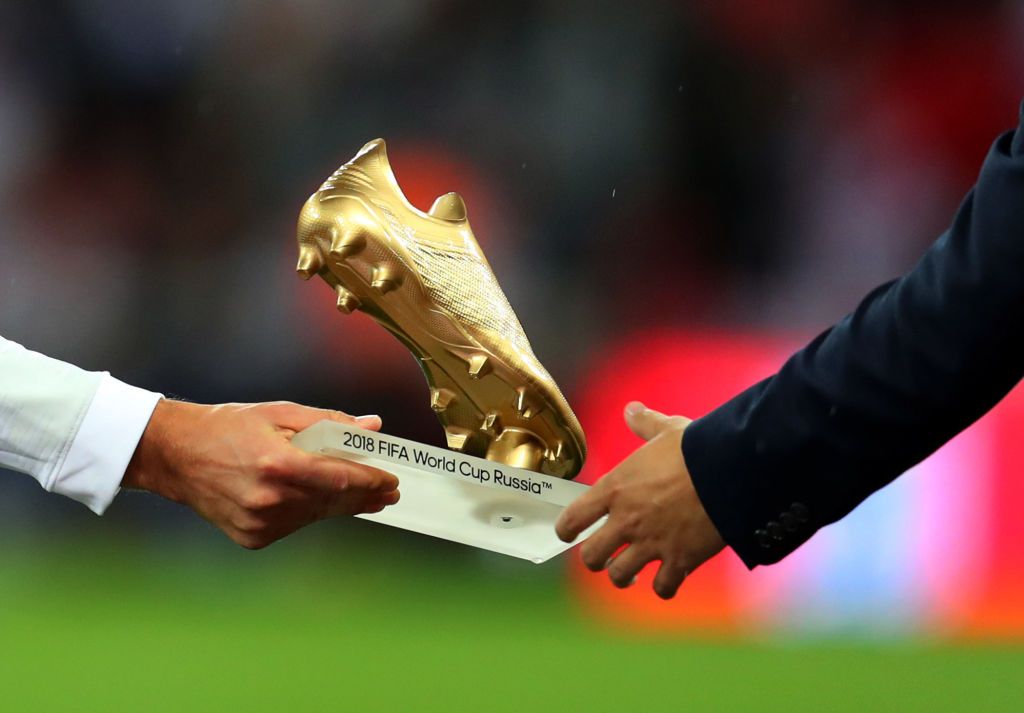 The World Cup 2022 will be different for many reasons, but one thing will remain the same: it will provide the most prestigious of stages for some of the game’s greatest goal threats.

They’ll be vying to leave Qatar with the Golden Boot – an award won by England’s Harry Kane four years ago in Russia – and follow in the footsteps of some utterly iconic scorers.

It was until the 1982 World Cup that FIFA gave out an official prize – the Golden Shoe – but we don’t need shiny trophies to tell us who’s finished as each tournament’s top scorer. Here’s the full list…

Argentina lost the first-ever World Cup final to hosts, neighbours and rivals Uruguay – but there was one winner in their squad: Guillermo Stabile.

The centre-forward banged in eight goals (including one in the final and a hat-trick against Mexico in the group stage) in just four games – which, extraordinarily, turned out to be the only caps he ever earned for his country.

In 2006, following extensive research by the United States Soccer Federation, FIFA finally awarded Nejedly (who died in 1990) an extra goal to take his tally for the tournament to five.

Often credited with inventing the bicycle kick, Leonidas was the first of five Brazilians to finish as (joint) top scorer at the World Cup.

The ‘Black Diamond’ bagged seven goals in 1938, opening his account for the tournament with a hat-trick as Brazil won a 6-5 thriller against Poland in the first round.

After the 1950 World Cup, all the talk was – understandably – of hosts Brazil’s capitulation against Uruguay in the last game of the tournament (this was the only World Cup with a decisive group round rather than a regular final).

But one Selecao player had cause for (perhaps private) celebration amid the furious fallout: Ademir, who scored nine goals – at least five more than any other player.

When you think of Hungary’s golden generation, Ferenc Puskas is almost certainly the first name who comes to mind. It was Sandor Kocsis who took the 1954 World Cup by storm, though.

The striker – who would go on to star for Barcelona – finished the tournament with 11 goals, including a brace as the ‘Magical Magyars’ beat Uruguay 4-2 after extra time to reach the final (which they lost 3-2 to West Germany).

Arguably still the most famous World Cup top scorer of all, Just Fontaine’s record for the most goals in a single tournament looks like one of the most unbreakable in football.

His 13-goal haul in Sweden is made all the more remarkable by the fact France didn’t even make it to the final. Fontaine did score in all six of his side’s games, mind you, beginning with a hat-trick in a 7-3 thrashing of Paraguay – and finishing by going one better in the third place play-off as Les Bleus beat West Germany 6-3. Just fantastique.

An all-time low four goals was all it took for these six players to finish the 1962 World Cup in Chile as joint top scorers.

Garrincha and Vava enjoyed the most successful tournament, playing starring roles as Brazil retained their crown – with the former also (retrospectively) being named player of tournament.

You could be forgiven for thinking that Geoff Hurst finished as top scorer at the 1966 World Cup – but England’s hat-trick hero only notched one goal other than his three in the final.

Nope, the tournament’s leading marksman was the iconic Eusebio, who netted nine times – including a penalty in Portugal’s 2-1 semi-final loss to England (after which he famously left the pitch in tears).

Gerd Muller was one of the most clinical finishers the game has ever seen, so it comes as absolutely no surprise that he top-scored at a World Cup.

Der Bomber’s 10 goals weren’t quite enough to fire West Germany to glory in Mexico – they lost on penalties to Italy in the semi-finals – but he would enjoy that feeling four years later on home soil.

Robert Lewandowski may have superseded them all, but Poland have had a few prolific goalscorers down the years – among them Grzegorz Lato.

The winger struck seven times as Poland finished third in West Germany, getting the only goal of the game in the third place play-off against Brazil.

Mired in controversy, the 1978 World Cup goes down as probably the dirtiest to date – but amid all the allegations of match-fixing, it’s a fact that Mario Kempes top-scored with six goals.

Kempes’ most decisive contribution came in the final, where he bagged a brace as Argentina beat the Netherlands 3-1 after extra time. The then Valencia star was also named the player of the tournament (albeit unofficially as the Golden Ball didn’t yet exist).

In 1982, the World Cup top scorer finally got a prize – the Golden Shoe – and Paolo Rossi was its first recipient as he fired Italy to their third title with six goals in Spain.

The late Azzurri icon also picked up the inaugural Golden Ball and remains one of only three players (and the only European player) to finish as top scorer, player of the tournament and win the World Cup itself at the same finals.

England’s Mexico 86 campaign ended at the, er, hands of Diego Maradona and Argentina – but Gary Lineker didn’t need any more games to pick up the Golden Shoe.

In fact, his consolation goal (his sixth strike of the tournament) in that infamous quarter-final ultimately proved enough for him to pip Maradona to the award.

The then Juventus frontman finished Italia ’90 with six goals (out of seven he ever scored at international level), netting in all three knockout matches as the Azzurri reached the semi-finals.

Unfortunately for Russia, their 6-1 group stage drubbing of Cameroon wasn’t enough to book their place in the knockouts – but Oleg Salenko’s record five goals in one World Cup game were enough for him to walk away as joint Golden Shoe winner.

Hristo Stoichkov stayed in USA 94 rather longer, spearheading the Bulgaria side which ultimately finished fourth. Three of his five goals were penalties – including two in one match as Bulgaria swept aside Greece 4-0 in the group stage.

Having qualified for their first World Cup since gaining independence, Croatia almost went all the way to the final of France 98 – narrowly losing to the hosts in the semis.

Davor Suker momentarily had Miroslav Blazevic’s side ahead in that tie before Lilian Thuram turned things around for Les Bleus – but the future Arsenal striker did score the winner against the Netherlands in the third place play-off, finishing the tournament with six goals.

After losing the previous World Cup final following a mysterious health scare, the ‘original’ Ronaldo entered the 2002 tournament at the peak of his powers – and he certainly didn’t disappoint.

The main man in a brilliant Brazil team, Ronaldo ended on eight goals – still the highest tally since Gerd Muller’s 10 in 1970 – including the semi-final winner against Turkey and a brace as Luiz Felipe Scolari’s men defeated Germany in the final.

A steady enough scorer at club level, Miroslav Klose became a different beast when he pulled on the shirt of the German national team. With 16 goals across four tournaments, he holds the record for the most goals in World Cup history.

He netted five times at two World Cups – and while that tally wasn’t enough to compete with Ronaldo in 2002, it was enough to secure the Golden Shoe on home turf in 2006 (Die Mannschaft crashed out in the semi-finals then, but Klose did eventually become a world champion in 2014).

James Rodriguez’s all too short career peak began as he lit up the 2014 World Cup, scoring six goals to stop Thomas Muller from winning a second successive Golden Boot.

The Colombian entertainer helped his country to the quarter-finals in Brazil and conjured up one of the greatest goals the World Cup has ever seen: that 25-yard chest-and-volley against Uruguay in the last 16.

Russia 2018 ended in heartbreak for Gareth Southgate’s England, but Harry Kane did emulate Gary Lineker by winning the Golden Boot.

Captain Kane bagged a brace (including a dramatic 91st-minute header) as the Three Lions beat Tunisia 2-1 in their tournament opener – then scored two penalties as part of a hat-trick in the 6-0 demolition of Panama, and another one in the last 16 victory over Colombia.