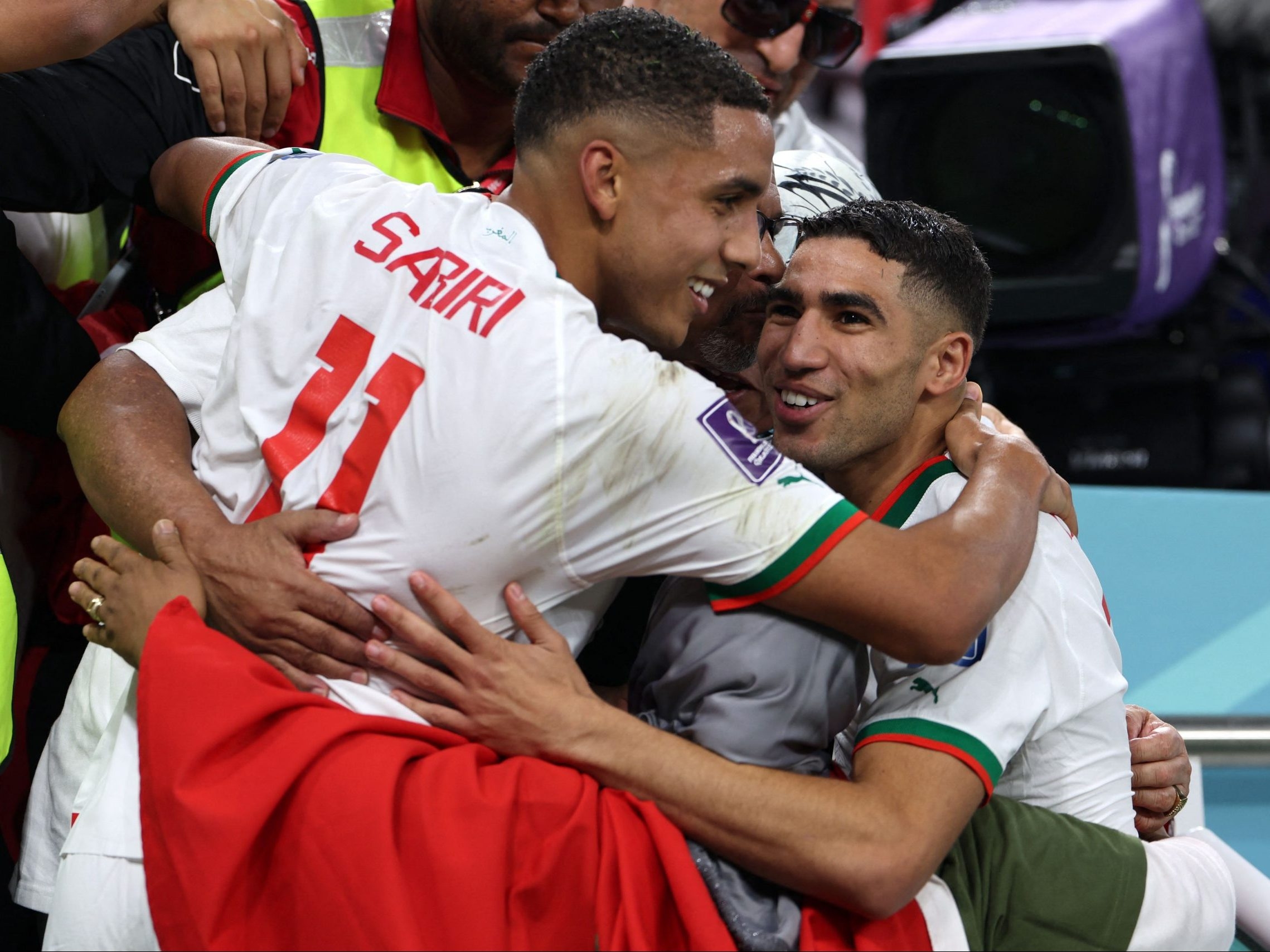 Morocco’s Achraf Hakimi (R) and Abdelhamid Sabiri are greeted at the end of the Qatar 2022 World Cup Group F football match between Belgium and Morocco.

AL RAYYAN, Qatar — Morocco pulled off the shock Canada was unable to on Sunday, defeating Belgium at the 2022 FIFA World Cup.

Romain Saiss and Zakaria Aboukhlal scored for Morocco in a 2-0 win, which has the semifinalists and third-place finisher from four years ago in Russia, on the brink of crashing out in the group stage.

With the win, Morocco went to the top of Group F, momentarily, with four points, before Croatia defeated Canada 4-1 later in the day to take over top spot on goal differential. Morocco opened the tournament with a scoreless tie against Croatia.

“We scored at the right moment, we deserved to win,” said Morocco midfielder Hakim Ziyech, who was named man of the match. “After 70 minutes, some of our players were tired, but the way the crowd got behind us, they really helped us. They gave us a big boost.”

Morocco had an opening goal late in the first half waved off for offside after Ziyech bent the ball in past Belgian goalkeeper Thibaut Courtois on a free kick. Saiss, however, was impeding Courtois line of sight while in an offside position so the goal was disallowed.

Morocco then scored a similar goal in the second half when Abdelhamid Sabiri swung in a free kick and this time Saiss, in an onside position, got a slight touch on it.

Aboukhlal then scored two minutes into second-half injury time to seal the victory turning in a low cross and hammering it over Courtois.

Despite the loss, Belgium still has a chance to advance, but need to beat Croatia in its final group game. Morocco will advance with a point against Canada on Thursday. Canada was eliminated from the next round by losing its first two games.

“It’s a difficult result,” said Belgium coach Roberto Martinez. “We couldn’t get our game going. It’s a game we need to understand; we need to be together and react. That’s what happens at the World Cup.”

Substitute Niclas Fullkrug scored to keep Germany alive for another game at the World Cup.

Having lost its first game 2-1 to Japan, Germany needed a result against Spain at the Al Bayt Stadium north of here in Al Khor on Sunday, to stay in the tournament.

Fuellkrug scored in the 83rd minute to give Germany a 1-1 tie, hammering a shot past Spain goalkeeper Simon Unai.

“We needed that. We could have scored earlier and had a couple of good chances before our goal,” said German striker Ilkay Guendogan. “The result in the end, against a very tough Spanish side, is fair. Now it’s down to the last game. It’s crazy, the World Cup, you know it’s going to be dramatic; ups and downs. The finish for our goal was unbelievable.”

Alvaro Morata had given Spain a 1-0 lead turning in a cross in the 62nd minute. Spain hammered Costa Rica 7-0 in its opening game of the tournament.

It appeared Spain was going to hold on to the lead until substitute Fuellkrug ran on to a ball in the Spain penalty area and hammered it into the net.

Germany still has work to do, needing to defeat Costa Rica in its final match. Costa Rica surprised Japan by scoring on its only shot on net in a 1-0 win earlier in the day.

“We have the mentality and we deserved the chances,” said German head coach Hans Flick. “There was a shift in the match and we went in hard. Things start to develop when you start to win, so hopefully, this will give us the self-confidence to score goals. The things that Niclas Fuellkrug did, showed that confidence.”

After getting pounded 7-0 in its opening match, Costa Rica was able to beat Japan 1-0.

Keysher Fuller scored in the 81st minute to give Costa Rica the win and put it back in the mix to advance to the next round. Costa Rica will face Germany in its final group match.

“I think it is important to recognize these players to be able to do such an amazing thing, and I think it’s important to appreciate what they’ve done to get this result,” said Costa Rica head coach Luis Fernando Suarez. “We had to face many challenges, but we firmly believed we could play well, but to do that, we had to be 100% committed.

“Beating a team like Japan that is playing so well in this World Cup, is something that we need to appreciate greatly. We’re still alive, we weren’t dead yet and it’s good to still be alive and we have to focus on our next match on Thursday, which will be as tough as today’s game.”

“We were trying to not concede a goal, and I think early on we didn’t play a bad match,” said Japan head coach Hajime Moriyasu. “In the second half, we had good possession of the ball and we were trying to control the game, and we thought if we could have total control, then we would be able to win, but unfortunately, it didn’t happen that way.”