Zach Wilson already back, walking around Jets’ facility after surgery

Zach Wilson was back at the Jets’ facility in Florham Park on Thursday after undergoing arthroscopic surgery on his right knee to fix a meniscus tear on Tuesday in Los Angeles, coach Robert Saleh said following practice.

“He’s already walking,” Saleh said. “He’s in really good spirits and he’s chomping at the bit to get to rehab.”

Coach Saleh gives an update on QB Zach Wilson, who is back in the building. pic.twitter.com/HjB6kR0gAd

Though Saleh could not provide an updated timetable, and the clock is ticking if Wilson is to play in the season opener on Sept. 11 against the Ravens, it is certainly a positive update for an injury that initially looked as though it could end Wilson’s season.

Wilson went down last Friday during the Jets’ preseason opener against the Eagles. Because the injury was non-contact, it was easy to assume the worst in the initial hours, but it turns out Wilson should be back relatively soon, with the initial timetable being 2-4 weeks.

“It’s really gonna dictate on how he feels and when he’s ready to go,” Saleh said. “We’re gonna make sure that we do right by him in terms of making sure that he’s 100 percent healthy. Whenever that is, that’s when he’ll hit the field.” 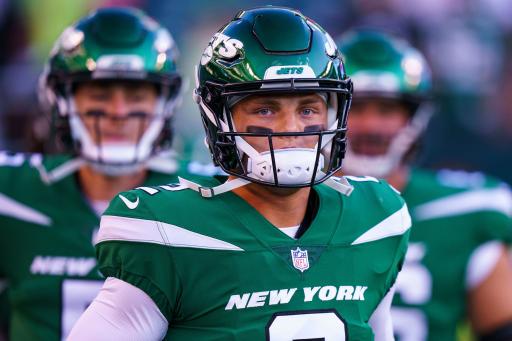 Making sure Wilson is completely healthy will take precedence over getting him back for the opener. Wilson already suffered a PCL injury to his knee last season, warranting some degree of caution this time around.

“If Zach is ready to go, he’s gonna be the Week 1 starter,” Saleh said. “If not, then Joe [Flacco] will. That’s no secret. But again, we’re gonna take it by how Zach looks, how he feels, how he moves, what the doctors tell us and whenever that moment is, he’s stepping on the football field.”

In the meantime, the emphasis for Wilson becomes making the most of a bad situation.

“He’s gonna go and he’s gonna attack it the best way he knows how,” offensive coordinator Mike LaFleur said. “He went through this last year, unfortunately. He knows what to do, what to say, what to watch, what to do in the meetings. … When he’s back and ready to go, it’s gonna be full speed ahead.”

Saleh said he was “hopeful” DT Quinnen Williams will participate in practice this week as he deals with an ankle injury.

Report: Draymond ‘forcefully struck’ Poole at Dubs practice originally appeared on NBC Sports Chicago Draymond Green reportedly could be facing internal discipline after an altercation with Jordan Poole at Warriors practice on Wednesday. The Athletic’s Shams Charania and Anthony Slater reported, citing sources with knowledge of the incident, that ...

Edward Berthelot/Getty Images Eiza González is addressing reports that she has been cast as Elektra in Daredevil: Born Again, the Marvel series being developed for Disney+. The Mexican star also pointed out that she had been receiving hate from fans that seemingly didn’t want her in the role. “I ...