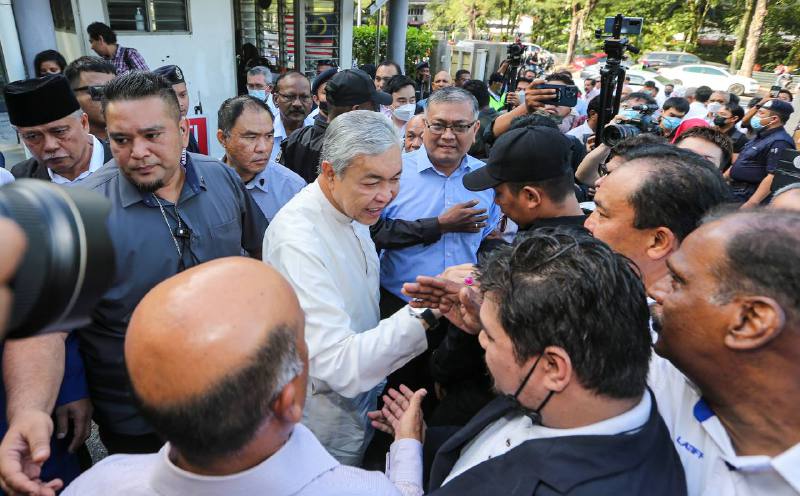 SHAH ALAM: Umno president Datuk Seri Dr Ahmad Zahid Hamidi will today know if he has to enter his defence over 40 charges of receiving bribes from a company to extend its foreign visa system (VLN) contract.

The former deputy prime minister arrived at the court complex here at 8.50am, accompanied by a small group of his supporters.

Security at the court complex was beefed up and only those with passes were allowed in.

A large group of journalists and photographers had also gathered here from early morning to wait for proceedings to begin.

High Court judge Datuk Yazid Mustafa is expected to deliver his decision about 9.30am.

Zahid will be acquitted without his defence being called if the judge finds that the prosecution has failed to establish a prima facie case against him.

He will, however, be ordered to enter his defence if the judge finds that the prosecution has proven all elements of the charges.

Zahid, who is Bagan Datuk Member of Parliament (MP), is facing 33 charges of receiving bribes amounting to S$13.56 million (RM42 million) from Ultra Kirana Sdn Bhd (UKSB) to extend the firm’s contract as the operator of a one-stop centre in China and the VLN system as well as to maintain a contract for the supply of the VLN integrated system

The former Home Minister is also accused of another seven counts of obtaining for himself S$1.15 million, RM3 million, 15,000 Swiss francs and US$15,000 from the same company in connection with his official duties.

He is charged with committing all the offences at Seri Satria in Precinct 16, Putrajaya, and at Country Heights, Kajang, between October 2014 and March 2018


View more: ‘Not my manager lying in my write-up’: Worker’s HR meeting goes south as employer refuses to accept her 2 weeks’ notice

Wan Junaidi said Malaysia will spare no expense in defending its sovereignty and its assets abroad wherever they may be situated. – Bernama Photo PUTRAJAYA – Malaysia will take legal action in the Netherlands to resist and set aside any attempts by the Sulu group to enforce an arbitration ...

PAS orders party machinery to be ready for GE15

Investigation paper on Tommy Thomas to be referred to AGC - Police

Check Out The Proposed New Features For Shah Alam Stadium