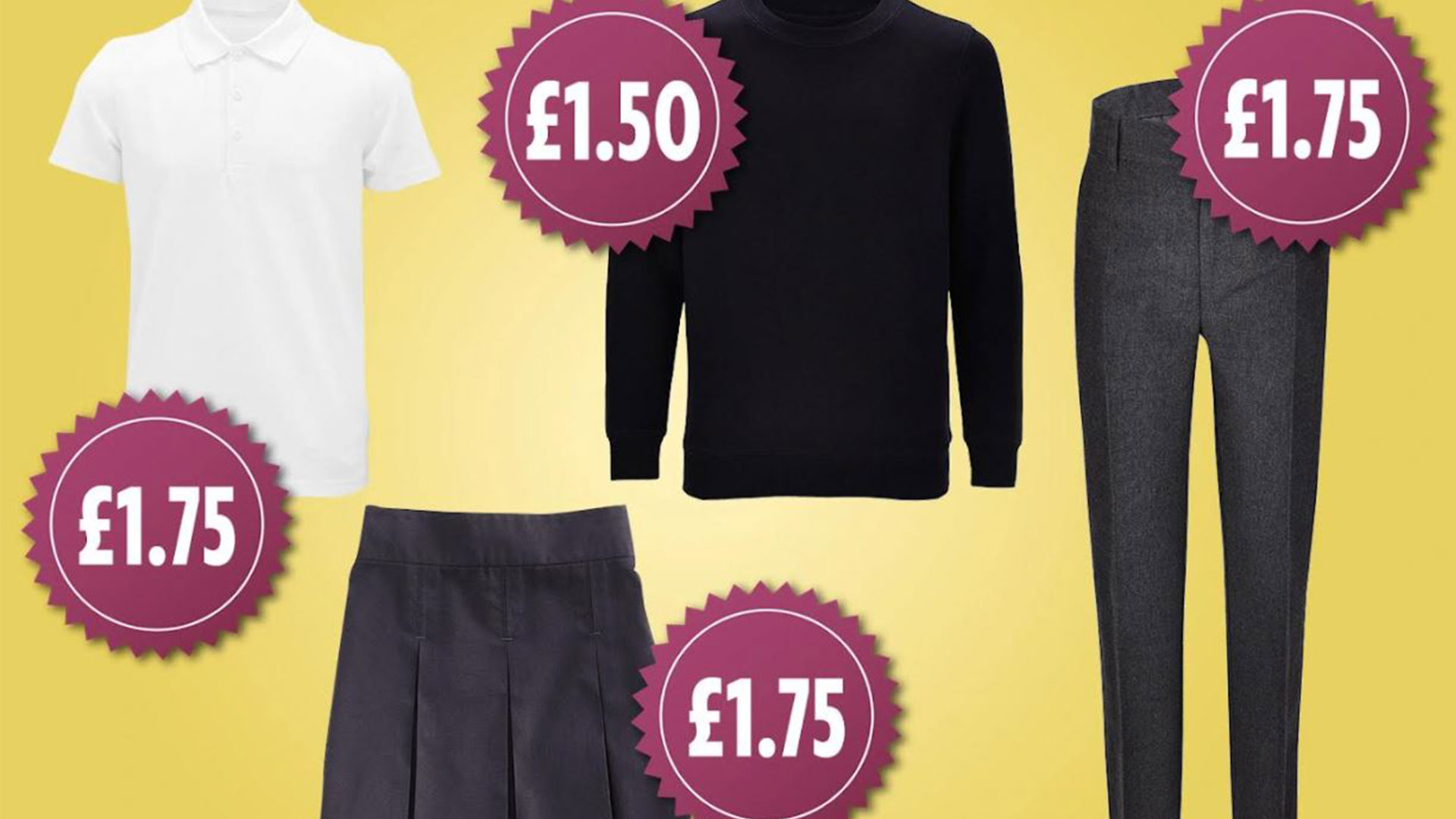 BUDGET-FRIENDLY supermarket ALDI is bringing back its popular £5 uniform bundle next month.

Prices for school uniform essentials start at as low as £1.50, meaning the deal is sure to fly off the shelves fast. 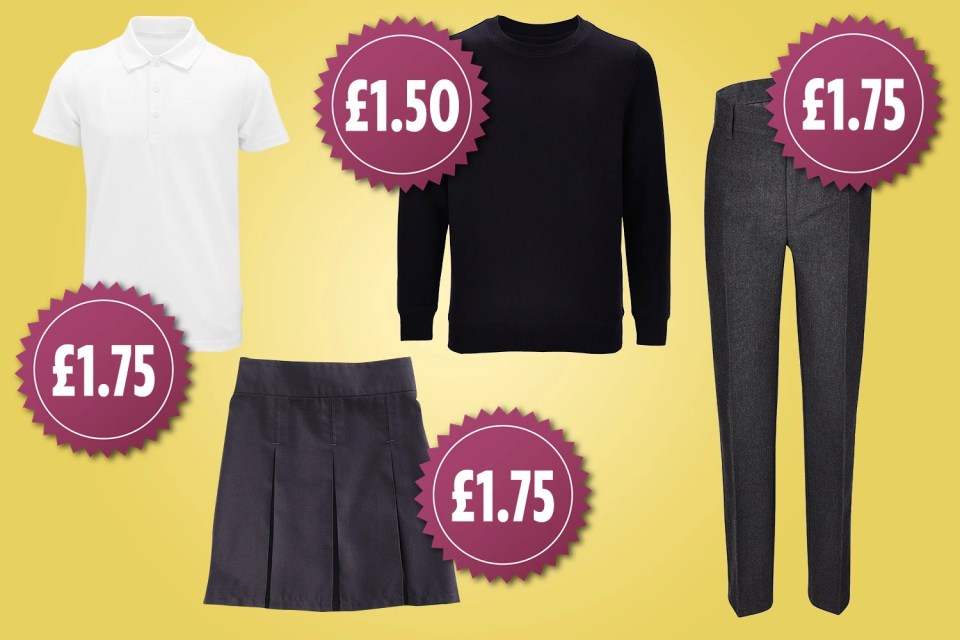 Aldi is bringing back its popular £5 uniform bundle next month

It will be available to pre-order online from July 3 and you can pick up the items in storm from July 7.

The school bundle includes two polo shirts, one sweatshirt and either trousers or a skirt.

The items are available in sizes four years up to 12 and they also come with a satisfaction guarantee.

Each year, the supermarket giant holds an event for parents, allowing them to buy all uniform items at a bargain price and ahead of the September rush.

Many households will be struggling financially during the cost of living crisis with energy bills, inflation and other costs soaring.

So Aldi's bundle will come at a welcome time.

But you'll have to be quick, as the bundle is a Specialbuy, so once the items are gone, that's it.

For items bought online, there is a minimum delivery cost of £2.95.

That means it's going to cost parent 50p more to stock up this year, but it's still pretty cheap compared to rivals.

Aldi is continuing its partnership with Cotton made in Africa (CmiA) which means the uniforms are made with the highest quality, sustainably sourced cotton.

Tesco, Asda and Sainsbury's are some of the other supermarkets who sell school uniforms.

Here is some of what they offer, and how much it will cost you:

What other ways can you save on school uniform?

For those not wanting to pop to the supermarket, there are other options open to you.

Going second-hand is one thing you can do to save on the pounds.

Also keep an eye out for school fetes as parents will often be selling items their children have outgrown.

Facebook Marketplace is another great option. Often you'll find branded uniforms for at least half the cost or, if you're lucky, free.

And under the Education Act 1990, you may be entitled to a school uniform grant.

To find out if you're eligible, go to the government's website.

Cost of living payment - can my landlord pocket my £400 energy rebate if I rent?

How to battle unfair charges from private parking firms… and win: The This is Money podcast

Should you set YOUR sights on a takeover target? The weak pound makes UK shares easy prey for foreign buyers – but investors can cash in too

Is Tim Westwood married? Does DJ accused of sexual misconduct have a wife or girlfriend

Can a 'smart' home app save you money on your energy bills? We visited Samsung's high-tech apartment in Surrey to find out

Premium Bonds warning as £50million in prizes need to be claimed - are you due a payout?

Pension annuity rates are rising at the fastest rate for 30 years: Should I buy one to fund my retirement or stay invested?

Can small investors can cash in on floats? Opportunities to bank a profit can be rare but prove very lucrative

The FTSE 100's five biggest fallers of 2022: Why have their share prices gone into freefall and could investors bag themselves a bargain?

'Does my boot look big in this?' is a fair question to ask of the new all-electric Citroen e-C4 X, says RAY MASSEY

The gung-ho era of private equity deals, largely financed by bank debt, is coming to a shuddering halt. A combination of surging interest rates and an abrupt end to the post-financial crisis years of free and easy money is causing serious damage. When last remaining buyers, Apollo and India’s Reliance ...

Webb has raised the alarm over women receiving zero or low payouts since 2016He called for systematic checks after recently discovering a series of errors A DWP probe identified a 'training issue' with processing state pension claims But it denies it is undertaking a full review and rechecking all zero cases Were YOU refused a state pension? Find out how to contact us below

Ruth Neave: who is mother of murdered schoolboy Rikki Neave, why was she a suspect, and where is she now?

Schoolboy Rikki Neave was killed in March 1994. (Credit: PA/handout) The murder of six-year-old schoolboy Rikki Neave shocked the nation in 1994, with the case continuing to shock almost 30 years later. , having killed him at only 13-years-old himself. The convicted killer was not the investigators first suspect ...


View more: Ruth Neave: who is mother of murdered schoolboy Rikki Neave, why was she a suspect, and where is she now?

Inflation is hitting my business hard, how can I pass on price rises at my small bakery to my loyal customers without losing them? BANK ON DAVE replies

Our column from self-made millionaire Dave Fishwick How do I best communicate price rises to my bakery customers? Should I use a job offer to haggle a better salary? Have a question? Email: bankondave@thisismoney.co.uk


View more: Inflation is hitting my business hard, how can I pass on price rises at my small bakery to my loyal customers without losing them? BANK ON DAVE replies

JEFF PRESTRIDGE: Policing insurance pricing is a task that brilliant mathematician Alan Turing would have struggled with - is FCA up to the job?

Praise from the country’s financial regulator? No way, I must be dreaming. But yes, it’s true – it wasn’t a fairy tale dream that I experienced a few days ago. It actually happened.  The regulator, the Financial Conduct Authority, took time out from its exhaustive three-year investigation (sarcasm intended) into ...


View more: JEFF PRESTRIDGE: Policing insurance pricing is a task that brilliant mathematician Alan Turing would have struggled with - is FCA up to the job?

With house prices rising sharply in recent years, many young people have been blocked from the first rung on the property ladder. But offering hope to first-time buyers everywhere, a woman has revealed how she saved £50,000 in less than two years to buy her first property. Hilary Iyoha, 25, ...

Two major factors underpin the case for Anglo Pacific Group, London’s longest standing mining royalty company. The first is that, to use the modern jargon, it’s becoming increasingly future-facing. Anglo Pacific owns income streams on vanadium, nickel, cobalt and copper assets, amongst others, all of which are commodities that are ...

The FCA acts - thanks to our readers: After months of slippery excuses, insurers are forced to PROVE they have stopped ripping off loyal customers

How to find your lost pension, as experts warn savers could lose out on thousands by missing plans

Want to invest ethically but keep costs down? Experts explain how to choose a responsible tracker fund - and some to consider

Would you prefer to pay by cash or card? On a trip round her home town SARAH BRIDGE found some shops refuse to take 'real' money... but a few still prefer it

Splashed out thousands on the garden? Beware one in ten home insurance policies don't include BBQs, garden furniture or lawnmowers

New cars sold in the EU must have automatic speed-limiting tech from Wednesday - will Britain soon make Intelligent Speed Assistance mandatory too?

INVESTING EXPLAINED: What you need to know about a dead cat bounce - the short-term reprieve as markets crash

Legendary jewellery designer Theo Fennell says: 'Never mind profits - it's Elton John wearing my brooch at the Oscars that gives me a buzz!'

Fund review: JPM US Equity Income has fared better than most in the falling markets with funds up 0.79%

Basic income - why some people get free money and eligibility to receive £1,600 a month

Asda, Sainsbury's and TK Maxx giving big discounts to shoppers who work in these 14 jobs

Zawe Ashton: who is Tom Hiddleston’s wife as she reveals she’s pregnant, age, and do they have other kids?

What is the metaverse and can investors profit from it?

Logan Mwangi: mum and stepdad jailed for life for murdering boy, 5, and dumping his battered body in river