After winning two consecutive Fight of the Year awards, Sam Eggington is one of the few fighters you can trust when he says he'll deliver entertainment in the ring. 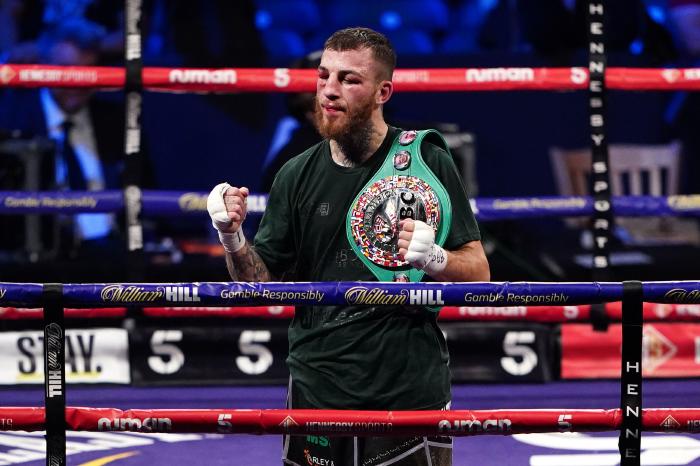 Sam Eggington returns to the ring this weekend, with the Brit facing the undefeated Przemyslaw Zysk on Saturday night.

The 28-year-old has been at the centre of some stunning displays in recent years, and now boasts a 31-7 record in boxing.

Poland’s Zysk now stands in his way, and Eggington is confident of putting on another entertaining show in Coventry.

After two consecutive Fight of the Year awards, we aren’t going to argue, and the Birmingham-born fighter seemed full of confidence ahead of the clash.

“I’m always ready,” Eggington said. “I know how my fights go, so we always prepare for that.”

Eggington’s first Fight of the Year award came in 2020 during his points win over fellow Brit Ted Cheeseman, and he followed it up by winning the prize again in 2021, this time in his gruelling bout with Bilel Jkitou.

“I know that my fights are going to end up in a slug-fest, a gruelling night’s work.

“So I prepare for that. If I get in there and I throw a shot and it puts them out early then that’s great. But if I don’t I know that I’ve got to drag them there and keep them there until they give up,” Eggington added.

“When I’m in the ring, it kills me as well. I don’t know if I’ve got another four rounds, three rounds but I’ll always make it. I genuinely put that down to hard work.”

The man tasked with constructing Eggington’s game plan is trainer Jon Pegg, who praised his fighter’s grit and determination.

“Deep down people want to outbox people, people want to have a fight where they don’t get hit if they can help it. He genuinely enjoys it,” said Pegg.

“Even people who beat him, he drags them into the kind of fight they never want to be in again [but] Sam looks for that. That’s the difference and that’s why he keeps doing them.”

Eggington is in action on Saturday evening, with Karriss Artingstall and Adam Azim also fighting on the same card in Coventry.

Give kids sex education facts and teach them to be kind

Hyundai Ioniq 6 N to be revealed this month

Greens Senator Lidia Thorpe has called for a Day of Mourning on January 26. Appearing on NITV’s Big Mob Brekky on Wednesday, the Senator acknowledged NAIDOC Week’s origins, which it was born out of a “day of protest”. “This is Blak week, this is Blak excellence, this is Blak survival. ...

The Nets’ roster additions this offseason suggest they are still trying to compete for a championship. The dark cloud hovering over the franchise in light of Kevin Durant’s trade request, on the other hand, would suggest otherwise. The truth, as incumbent head coach Steve Nash likes to say, is somewhere ...

Brittney Griner’s coach lashed out at the star player’s ongoing incarceration in Russia. Speaking with reporters on Monday, Vanessa Nygaard, head coach of the WNBA’s Phoenix Mercury, posited that Griner would be back in the US by now if she were NBA superstar LeBron James. “If it was LeBron, he’d ...


View more: Brittney Griner’s coach: If this was LeBron James, he’d be home

Kevin Durant’s recent trade request sent shockwaves around the NBA, but not everyone is buying its veracity. ESPN NBA analyst Kendrick Perkins, for one, believes that Durant’s demand is merely a ploy. “I’m looking at it and I’m saying, ‘Why would KD want out?’” Perkins said on “NBA Today” on ...

A federal grand jury indicted GOP Rep. Tricia Derges on fraud charges after she falsely promoted a treatment she was selling at medical clinics as containing stem cells that could treat various disease including COVID-19. Nathan Papes/The Springfield News-Leader via AP A Missouri Republican state representative has resigned days ...

The Nets have clearly been perusing Indiana’s injury list. Brooklyn signed not one but two wings who missed all of last season for the Pacers. They inked Edmond Sumner after having already added T.J. Warren earlier Tuesday morning. “Journey not over,” Sumner tweeted Tuesday, with a prayer hands emoji. “will ...

LAS VEGAS — With the entire league gathered at NBA Summer League, this is the prime place and perfect time for Brooklyn to find trading partners for Kevin Durant and Kyrie Irving. But all indications are both dramas could drag on — and one or both stars could still be ...

The 2022 Championships at Wimbledon continue on Wednesday with two more quarterfinal matches on the men’s side. First up is a re-match between Rafael Nadal and Taylor Fritz, followed by a showdown between surprise package Cristian Garin and the mercurial Nick Kyrgios. Let’s take a look at the odds for ...

Coronavirus Today: Getting sick on purpose

Boris is a ‘dead man walking’, Trevor Kavanagh tells Piers Morgan on TalkTV, but MP says ‘it’s not about the individual’

How to generate or reset your ATM Card's PIN? Check different ways